That’s us on vacation in lovely Arizona.  Don’t be fooled, we weren’t lucky enough to work there.  We lived and worked in Cincinnati, Ohio for 30+ years; Ohio is a nice state, really, and Cincinnati has a great arts scene, but it’s pretty conservative politically (don’t change anything!) and lacking mountains.  So after retirement, it’s time to go somewhere else more wild.  Now, to help you understand 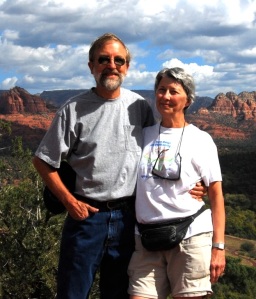 our thinking,  we spent a year living in Italy, due to me pushing and pulling like crazy at work to get an assignment there.  Living in Italy was different than living in the US, and we learned a lot about life from the Italians.  Well, maybe there is more to learn?  So one of our thoughts was “Why not investigate how other countries live life?  Why not live for a short while in other countries and get to know the culture?  And see more of the world?”  And the next thought was “How the heck can we afford to do that when we retire?”  The answer to that was – we can’t, unless we eliminate expenses.  So that’s what we did.  We (eventually) sold the house – long story – and sold the cars, and sold almost all that we owned (we kept some of the stuff we love, stored in a not-full 10’x10′ storage room).  Actually, we told the 2 kids “Take what you want before we sell it”, and it was like the proverbial plague of locusts descending; so we actually sold what was left after the plague – much reduced stuff, and sold alas for almost nothing – another long story.  Then, homeless, we mooched off our kids (revenge!) for some months before finishing preparations to leave for the wild world for a few years with only a few things on our backs – literally – and our only debt, Fed taxes.

We are looking forward to going to New Zealand, but since they kick you out after 9 months, including a winter makes no sense; so we are marking time until October.  We are starting off in Spain; to my surprise, my “Spanish from a book” is enough to get by.  I am only speaking to the natives in Spanish, and somehow they understand it!  Now, me understanding the replies is a little harder (they seem to know a lot more words than I do), but hopefully I’ll get better.

Gee, it’s been a long time since I wrote that!  Two years, really, and we’re still going.  If you’re new here, the top (pull down) menu presents the order in which we’ve done things.  The sidebar menu (“Places We’ve Been”) are those same places listed alphabetically.  Should you sign on to receive auto blog feeds, the Word Press format that you get by email is not user friendly (IMHO), so your best bet is to simply click on the title of the blog, and that will take you to the easier-to-use true blog format.  Feel free to add comments!