Yeah, I’m ‘way behind in my posts; I’ll blame excitement on the health front.  We had planned (and paid for!) our first-ever tour, a singer/songwriter-led tour of Ireland (with Small Potatoes), and by golly we were going to take this tour, even with Ginger recovering from surgery (we’ll backfill some health adventures in later posts).  It was a good time, so let me do this post while it’s fresh (and while friends from the tour still want pictures).

We’ll start with the pics of the plane trip into the “Emerald Isle”.  As you’ll see in these

Irish blogs, that appellation is well-deserved.

We decided to recover from jet-lag in the little town of Ennis, which is not only nearby and not touristy, but also has medieval narrow streets and a bit of medieval history.  We discover that Ennis has some very good restaurants and a vibrant music scene.  We checked out Cruise’s, a nearby pub/restaurant with nightly music.  Pretty fascinating!  There is no cover charge, you’re just expected to buy a pint or two (no problem!).  We first went to hear “Ann-Marie McCormac & Friends”, a regular who plays there frequently.  Typically there are two sets, the first being traditional Irish music (in this case Ann-Marie), and the second being something else by a different group.  The bar was paying for Ann-Marie (flutist) and two others – another flutist and a guitar player.  These three weren’t playing long before another player (unpaid) joined them, playing some kind 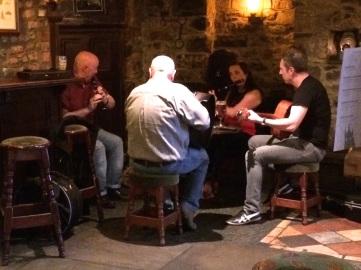 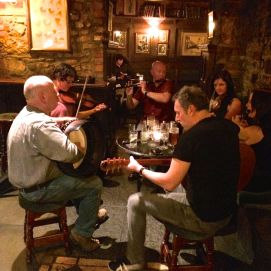 of hand drum (the Irish bodhrán?).  Then a violinist arrived, and a bit later another violinist ….  They’re not being paid, they just drop in!  Why do they do this?  Duh, this is the Irish life!  The majority of traditional Irish music (“Trad”), is dance music – reels or jigs – and it is impossible to listen to it without your knee bouncing up and down in time with the beat.  It has elements of jazz to it (in my uneducated opinion), with individual players taking a a leading role during the playing.  We visited Cruise’s again a few nights later to catch a “local lads made good” band that has been touring the world – US included – called the Hayes Brothers.  The band consists of a guitar, a flute, and the amazing 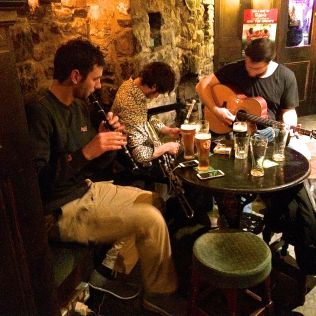 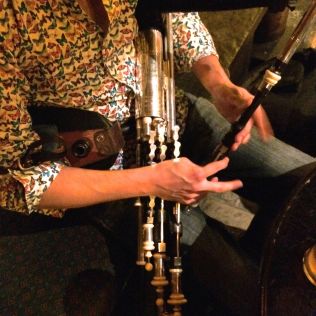 uilleann pipes (related to the Scottish bagpipe, but sweeter and quieter with a wide range of notes).  Oh my, what an instrument!  The player’s left armpit/arm holds a bellows that, by pumping, feeds air to the bag held between the right elbow and side, which by squeezing feeds air to the 2-reed flute-like tube played with the fingers of both hands; it plays the melody with a two-octave range.  Oh, but we don’t stop here!  There are three drones, each an octave apart, which may be switched on or off.  And just to make it challenging, there are three other double-reeded tubes (regulators) fitted with keys that provide chords and harmonic support for the melody, which the player plays with his right wrist!  And of course his knee (and everyone else’s) is bouncing like crazy to the music, so just about every part of his body is engaged.  It is amazing, and amazingly good.

The history of Ennis starts with the O’Briens, the Kings of Thomond, who in the 1100’s built a royal palace on an island between two courses of the River Fergus (Ennis comes from the Irish word for “island”).  Franciscan monks arrived in Ireland in the early 1200’s and were mostly wandering preachers of the gospels.  In 1240 the Thomond king invited them to stay in Ennis, and a monastery (friary) was built, around which the town grew. Students came in great flocks to study at the theological college – until Henry the VIII’s Dissolution of the monasteries around 1540.  Like most monasteries, the friary is in 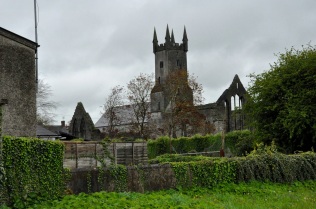 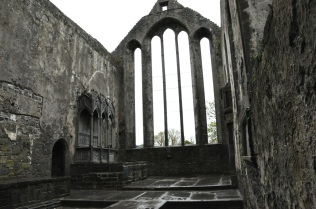 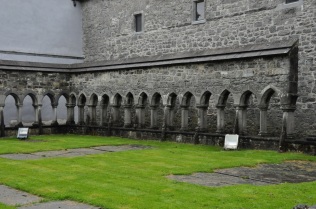 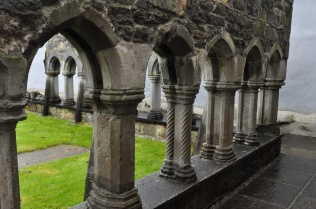 ruins now.  The earliest surviving parts date from 1285.  In its heyday it was the principal burial place of the Thomond kings and nobles; today it mostly boasts its limestone carvings that decorated the MacMahon tomb of 1470.  Although the carvings were exposed to the elements for centuries, they’re now protected inside; I’ll share a few. 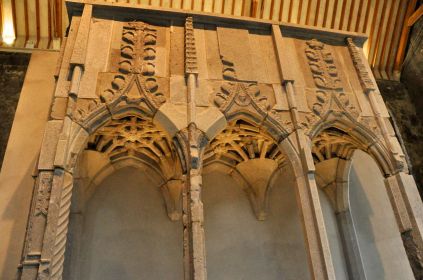 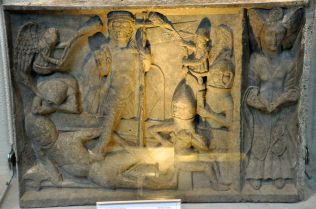 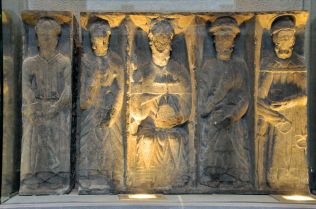 There are quite a few carved figures set into the friary’s stone. 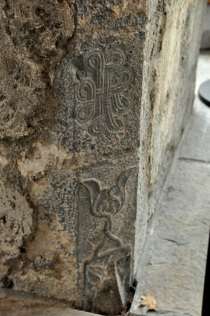 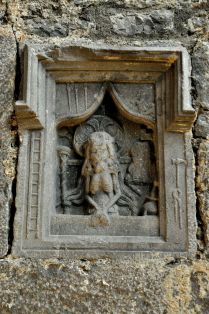 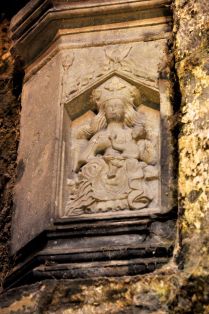 Well rested, our first real Guinness under our belts, we head off to Shannon to start our tour – next post.  Oh boy!