The hill on which Bamburgh Castle sits was a defensive site for thousands of years, taken and lost, damaged and rebuilt over the course of many centuries.  The Britons had an early fort here which was captured by the Anglo-Saxons in 547.  Later, in 607, King Aethelfrith expanded this region to create Northumbria and in 615 renamed the fort Bebbanburgh after his wife, Bebba.  His death in 634 was followed by the usual fight over succession, and his son Oswald fled to the Scottish isle Iona for safety.  This was the home of the monastery that introduced Christianity to the Picts.  When Oswald returned in 635 to oust the Welsh pretender and claim his throne, he brought a monk named Aidan with him from Iona.  Aidan established Christianity’s tenuous toehold in England at nearby Lindisfarne (see previous post “Durham and its Norman Cathedral“, February 6, 2015).  Rival kingdoms continued to contest the region for several centuries, until Bebbanburgh was left in ruins by the Vikings in 993.  The conquering Normans built a new castle on the site, 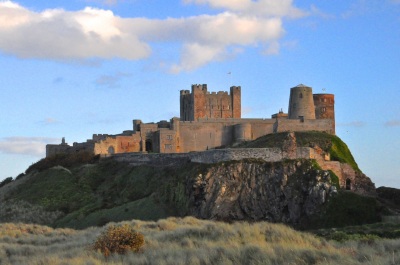 which forms the core of today’s Bamburgh Castle.  That square keep in the middle of the picture was built in 1164.  In 1464, during the War of the Roses, Bamburgh endured a 9-month siege; artillery was brought in to the attack, and the castle (but not the sturdy keep) was heavily damaged.   Bamburgh gained the dubious honor of being the first castle in England to be defeated by cannon fire.  During the 18th and 19th centuries the castle was restored by various owners.  The restoration was finally  completed by the wealthy Victorian industrialist William Armstrong in the 1890’s. 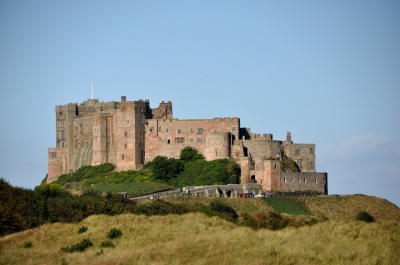 The front of Bamburgh castle is formidable.  The entrance has features similar to the Moorish forts of the 8th and 9th centuries (described in a much earlier post  – “Malaga, Costa del Sol“, Jul 10, 2013).  Given that the bones of this castle were built in the 1100’s, maybe that early style was still in vogue.  An attack through the front gate would have been tough. The approach to the gatehouse was pretty exposed;

once through the first gate, attackers would have had an uphill climb between high inner and outer walls to reach a second gatehouse and those walls would have been well-defended.  Attackers who managed to make it through the second gate would have found themselves in yet another uphill walled corridor, both trapped and exposed.   Run fast and duck a lot!  A model of the castle is shown below. 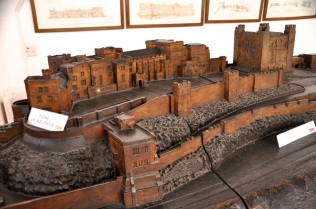 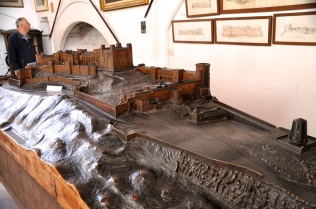 Before going inside to the staterooms, we’ll show a few exterior pictures.  That last

Into the staterooms we go!  The staterooms bore the brunt of the cannonball attacks and are a rebuild; in particular the (privately lived-in) interior is from the Victorian 1890’s.  That’s a little disappointing given the medieval exterior, but here goes.  We enter a medieval kitchen with 3 giant fireplaces.  It was originally built in the 1300’s, largely destroyed in 1464, then rebuilt in the 1700’s (note the cool bicycle).  After passing a few

small storage rooms we enter the impressive King’s Hall.  Take a look at that fantastic ceiling – it’s teak!  Wow!  Straight ahead is the Cross Hall.  This was the site of the (targeted) owner’s apartments that were destroyed in 1464.

From there we wander halls and and can only peek at the stairs that lead to the current owner’s private rooms. It’s quite a refined castle, really.  Cold and drafty it is not.

There is an armory with interesting armor and weapons, including a crossbow.

At  last we get to go into the keep, descending to a room called the Keep Hall.  The

ceilings are the typical barrel vaults used by the Normans.  In addition to the fireplace, the room has a well, the oldest of 3 on the grounds:  “There is on the west and highest point of this citadel a well, excavated with extraordinary labor, sweet to drink and very pure to the sight” – A History of the Kings of England, Simeon of Durham, AD 774.   The well is 6 feet in diameter and 130 feet deep, through solid stone.

Finally, take a look at this carved stone, discovered in the 1800’s and originally thought to be a piece of a standing cross, but more recently identified as the arm of an Anglo-Saxon 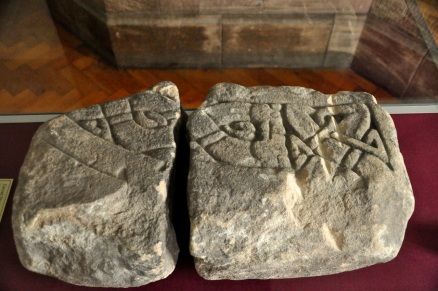 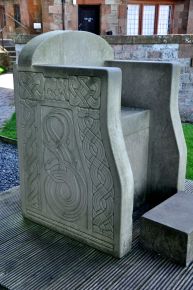 stone chair or throne from around 800 AD.  Since Bamburgh was a royal site, there is a chance it was part of a royal throne, a reconstruction of which is outside the keep.

I’ll finish with 2 more pictures of Bamburgh Castle.  The castle exterior is certainly 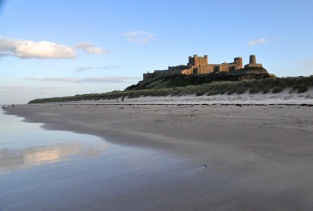 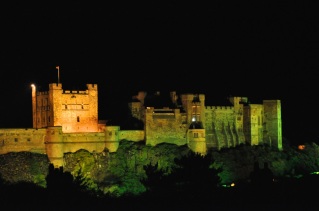