We’re  off to tiny Oban for several reasons:

If you remember from a previous post (Melrose Abbey, Scotland (and Greenknowe Tower), February 25, 2015), one of my goals on this tour of Scotland is to become knowledgeable of one of mankind’s more famous drinks, the single malt Scotch (Ginger gamely joins in, but is not a big fan).  Oban was on the whiskey map in that previous post (“Oban 14 yr old”); good enough reason to visit.  So off we go! 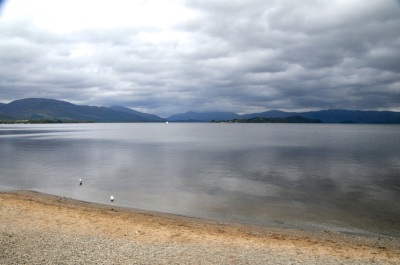 There are a number of different roads that go through the southern/central Highlands, heading northwest.  We choose the route that goes past Loch Lomond, the largest inland stretch of water in Great Britain and the centerpiece of Scotland’s Trossachs National Park.  You’ll recall that traditional Scottish song “Loch Lomond”:

By yon bonnie banks, and by yon bonnie braes,
Where the sun shines bright on Loch Lomond,
Me and my true love were ever wont to gae,
On the bonny, bonny banks of Loch Lomond.

Chorus
Ye’ll tak’ the high road and I’ll tak the low road,
And I’ll be in Scotland afore ye,
But me and my true love will never meet again,
On the bonny, bonny banks of Loch Lomond.

It’s a familiar old song, but I never knew it’s history or meaning.  There are several slightly different interpretations, but most are connected to the Jacobite Uprising of 1745 in support of Bonnie Prince Charlie [discussed in the last post (Stirling Castle, August 4, 2015)].  Two Jacobite soldiers, captured by the English, have different fates: one is condemned to death while the other, his friend, will be set free.  The song by the condemned man is based on the old Celtic myth that the soul of a Scot who dies outside his homeland will find it’s way home by the spiritual, or “low” road.  Doesn’t that make the song so much sadder?

It’s a long lake, 24 miles, and there are many opportunities to take a picture.  It’s a cloudy

day (of course; this is Scotland) and the lake itself seems sad.  Soon we climb into more 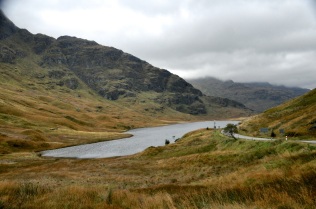 rugged and wildly beautiful territory.  And it just gets better, as shown below. 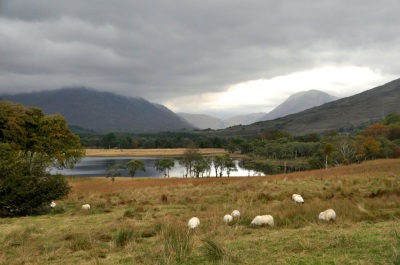 My favorite view of this part of the Highlands is the bucolic scene to the left, with looming mountains, a picturesque small lake, and busy, contented sheep.  Lucky sheep, with such a view!
Aren’t the Highlands beautiful?  Wait ’til you see more of them, in subsequent posts!
After all that stark beauty, the ocean town of Oban was disappointing.  It’s a small (and low key) resort with gravel beaches and a winding promenade lined by small hotels.  Here 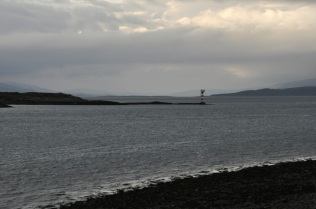 Scotland’s train system meets the ferry system to the Hebrides Islands; Oban’s center is a harbor, with huge boats.  Still, it’s pleasant enough, and it does have some great seafood restaurants!  Oh my gosh, if I’d been able to get a picture of one of the restaurant’s seafood platters, you’d be booking a plane ticket now.  Below are some views of the harbor.

Oban really has no important sights (other than a distillery!), but a short walk away it does have the ruins of a small castle (Dunollie) on a commanding spot overlooking the harbor.

It was the home of kings (Clan Chiefs, really) in the kingdom of Lorn for a thousand years, and the seat of Clan MacDougall from the 12th century (the clan held 7 other castles and a fleet of galleys).  Dunollie Castle was captured by Cromwell, who garrisoned troops there; during the first Jacobite wars, it was besieged; and it was finally abandoned for good in 1746.  Today it just adds historic atmosphere –

something that Scotland (and England!) are very good at. And, speaking of atmosphere, there is an area near the castle called “The Witches” because it is forested with twisted old trees, some as old as 400 years, that show the effects of the high winds here.

OK!  Time for the whiskey tour!  The Oban distillery is a

block off the harbor in the middle of town, which is very unusual; most distilleries are off in the country.  In this case, Oban itself grew up around the 200-year old distillery.  That’s a small problem for the distillery – it can’t easily expand!  The Oban Whiskey Distillery produces a West Highland malt scotch.  In the map of Scotland below, different colors denote regions of Scotland making distinctive flavors of Scotch – there

are about 5 of them.  Oban is near the middle of the various flavor profiles, with a touch of peat, a touch of salt, and a touch of honey in taste.  They make 4,000 gallons of Scotch a week (a lot of which goes to the US).  The process for making a single malt Scotch is pretty much the same throughout Scotland, and quite interesting!  Single malt Scotch is made from barley, water and yeast.  Sometimes peat smoke.  That’s it.  The diversity of flavors comes from the locally sourced ingredients, the skill of the master distiller, and subtleties in the production process.  All true, but the real revelation to me was that the real flavor of Scotch whiskey comes from America!  Fascinating!  Don’t tell a Scotsman that, but you’ll see.  Alas, most distilleries seem to think they have secrets, and photos are not allowed!  So I’ll just give an overview of the process.  Water is added to the barley to start germination (starch release), and then the barley is dried by heating in a kiln (in some distilleries, with smoking peat).  This is “malting”.  The malted grain is milled to a defined mix of powder-to-piece, hot water is added in a big stainless steel (or wood) vat, and the starch is converted to sugar (the wort), a process called “mashing”.  The wort is cooled, yeast is added, and fermentation occurs for 2-4 days (the time has a big effect on flavor), producing the “wash” – approximating a strong beer.

The wash is then distilled in two sequential copper stills that look like those on the left side of this picture – they look something like Hershey Kisses, only about 15 or 20 feet high.  The size and shape of the stills have a big effect on taste due to the liquid interacting with copper – the more the interaction, the lighter the Scotch (the liquid extracts copper).  The final distillation “cut” is about 68% alcohol, and goes to oak barrels to age – a minimum of 3 years to call it “Scotch”, but usually for a decade or more.  And this is where America comes in!  Those oak barrels remove harsher tastes and add flavors; and where do those oak barrels and flavors come from?  Why, 1-year-old used American bourbon barrels!  By (American) law our bourbon has to go into new oak barrels, so what to do with those used bourbon barrels?  The Scots buy them, knock them down, ship ’em to Scotland, rebuild the barrels, and add their Scotch to take on those yummy tastes!

Finally, our visit to a ceilidh.  This is the tail end of the tourist season, and we’re at the last show of the year, with just one other small group in attendance.  It’s probably a tailored-down show, but fun nonetheless!  After the band (2 people) plays Highland tunes, a singer sings Highland songs, and a young lady does very graceful, ballet-like

Highland dances, the audience gets to participate – both in song and in something like a line dance.  Some in the audience seem to know the steps; we do not.  The brief instruction was a little helpful, and the ensuing chaos was a lot of fun.  Although it seemed touristy, apparently people in Scotland grow up doing the ceilidh, and locals enjoy going.