Arcos is, like Ronda, another of those picturesque white-washed hill towns perched strategically on cliffs as a defense against the Catholic Reconquista that went on for 400 years, town by town slowly falling (the name is “… on the frontier”.)

We thought Arcos was a little disappointing.  It played a role in Moorish history by being hard to conquer, but it has a lot less to offer than Ronda in terms of natural beauty.  And it’s small.  We did stay in a Parador hotel; the Paradors are luxury accommodations in historical buildings – palaces, castles, convents, monasteries – that have been converted into hotels but maintained by the Spanish government. They are typically located in smaller medieval towns.  This one is relatively inexpensive.  The one in Grenada is a renovated convent within the Alhambra and is like $400 a night (we’ll pass).

These are from our hotel.

Views of another church from the terrace, and an appreciation of why Arco was easy to defend.

The picture of Ginger in front of the church – she is standing in an exorcist circle (red and white stones, 15th century).  Prior to baptism, the child was brought to the local exorcist for cleansing.

Pretty – and pretty narrow – medieval streets throughout town.  Actually, this is like most towns in the barrios of Andalucia. 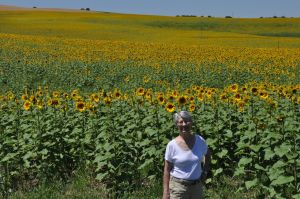 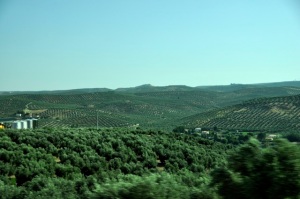 This part of Spain – Andalucia – appears to be very agricultural.    And prettily so.  The wheat fields go on forever across the undulating landscape, as do the olive trees.  The olive trees are amazing, going from horizon to horizon, often in neat rows. Olives are big business here; anytime you sit down for a beer or wine, out comes a dish of (green) olives.