This post is a continuation of the previous one, Amsterdam’s Rijksmuseum I.  Let’s start with another painting by the Bartholomeus van der Helst.  We saw him in the previous post; like Rembrandt, he was a leading portrait painter of the Dutch Golden Age.  In fact, although he and Rembrandt were contemporaries in Amsterdam, it was van der Helst who became the more popular portraitist in that city due to his flattering portrayals combined with Rembrandt’s drift towards more dark and introspective works.  This 1648 painting, Banquet at the Crossbowmen’s Guild in Celebration of the Treaty of Münster (marking an end to the war with Spain), is marvelous.  It captures the shadings of black, the reflections

on glass, the stiffness of lace, the look of metal, the feel of felt and feather – all those elements of technique that make the Dutch Masters so incredible.

Below are some paintings from Franz Hal, an early master of portraiture.  The first is Portrait of a Couple, Probably Isaac Abrahamsz Massa and Beatrix van der Laen, 1622.

The couple are celebrating their marriage (the garden of love is at their right).  The other two paintings are Portrait of Lucas de Clercq, 1635, and Portrait of a Woman, 1635.

A couple more portraits from the Dutch Masters, with their stunning renditions of black garments and white lace, are shown below – Portrait of Laurens Reael, by Cornelis van

Painters of this time tended to specialize, confining themselves to a single genre.  One such Dutch Master was Floris Claesz van Dijck, who invented the breakfast still life.  The paintings are nearly photographic.  The painting below is Still Life with Cheese, 1615.

You can almost touch that plate with the apple, and the nearly invisible wine glass in the background is exquisite.  Another such painter was Willem Claesz Heda, who specialized in near monochromatic still life.  The painting below is titled Still Life with a Gilt Cup, 1635. 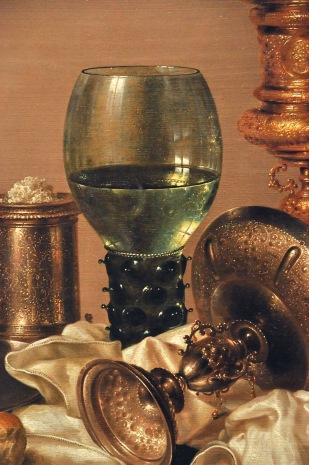 That lemon is soooo realistic!  And the detail on the fancy gilt cup is amazing – as is the beautifully rendered napkin.  Another master of still life was Pieter Claesz, an example of his painting, Still Life with a Turkey Pie, 1627, shown below.  I love the distorted 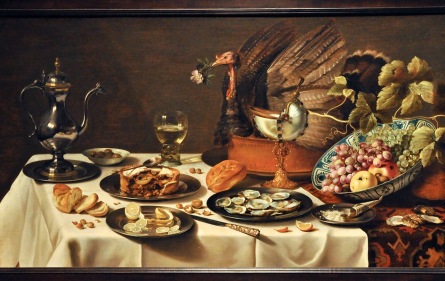 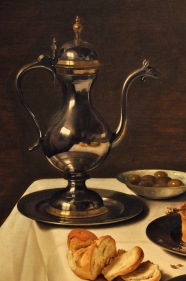 reflections in the metal pitcher!

Another area of specialization is the fruit and flower (and insect!) still life.  These painters beautifully (and colorfully) captured minute observations of each flower and insect. 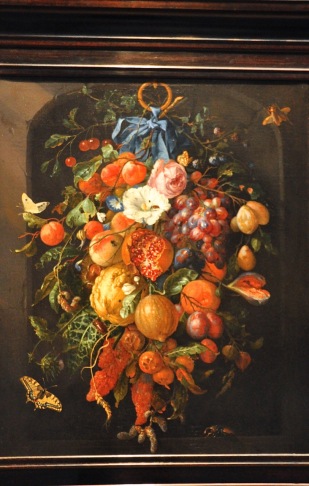 A final area of specialization that I’ll visit is marine painting.  Examples are the depiction of sea fights (ink on canvas) by Willem van de Velde I, and the marine paintings of his 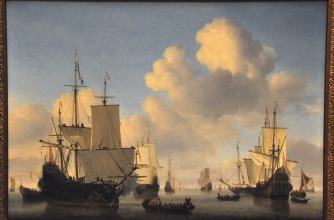 accuracy that they are regarded as the most precise guides available to the appearance of 17th-century ships.

One of the first Dutch landscape painters was Hendrick Avercamp, who specialized in painting the Netherlands in winter.  His paintings are narrative, with anecdotes.  This painting, Winter Landscape with Ice Skaters, 1608, is a busy scene showing people on the ice – most for pleasure, some working out of necessity – along with tongue-in-cheek

real-life details, such as a dog and crow feasting on a dead horse, a couple making love, bare buttocks visible in a barn, a peeing male ….  Life is not just a carefree skate!  In a similar vein, Avercamp’s Enjoying the Ice near a Town, 1620, shows the well-to-do

amusing themselves on the ice, while the needy – the beggar, the fisherman – toil to make a living.

There is more to the Rijksmuseum than paintings – for example, this lacquer chest attributed to the Koami workplace in Kyoto, Japan, about 1635.  Only the Dutch East India Company had access to Japan, and they commissioned such works for the wealthy.  The details on this chest are amazing; for instance, each kimono is exquisitely different, and

the flowers and foliage are fabulous throughout (and interesting!  Drops of silver on the foliage, e.g. in the 2nd picture above, represent dew).  Similarly, look at the fabulous

resolution and detail of the inlay of this table!  It’s spectacular.  Equally fabulous is this vase from the Sevres porcelain factory, 1908, influenced by Japanese art (yes, we have suddenly jumped to the early Art Deco period, but there it is).  This tall hand-painted vase features clematis (the vines after the flowers are gone) with ochre-colored thistles in the 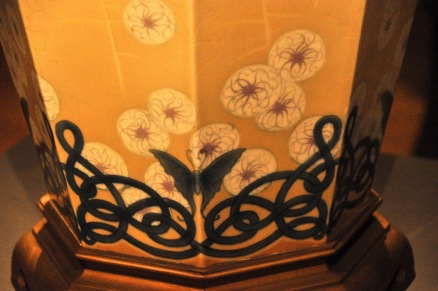 I’ll close this post with some tapestries from the (early) Dutch Golden Age.  We love tapestries from this age, often coming from Brussels, but typically the colors of these tapestries are sadly faded.  They’re left with mostly dulled green shades, requiring a lot of imagination to visualize their original splendor.  Not these Dutch tapestries!  They’re faded, to be sure, but a lot of color is still there, helping that visual leap to splendor.  The tapestry below is from the workshop of François Spiering and shows a part of a series on the life and times of the goddess Diana.  This one is titled Cephalus and Procris, from about 1593.  Cephalus has disguised himself to test the faithfulness of his wife Procris,

and the tapestry shows the story at different points in time (Procris runs to the goddess Diana, who intervenes; the two are saying farewell in the foreground).  Look at that color, and exquisite detail!  The last tapestry is from this same series, titled Meleager and Atalanta, also 1593.  Offended by the King of Calydon, Diana took revenge by sending a huge wild boar to ravage his kingdom.  The huntress Atalanta first wounded the beast,

and the king’s son Meleager then killed it.  Meleager, in love with Atalanta, presents the boar’s head to her as a trophy (next to last picture).  It’s really wonderful; even the border around the tapestry is a work of art (last picture).

That’s enough for now!  There’s one more post left on the Rijksmuseum.  We’ll leave the Dutch Golden Age and move on to everybody’s favorite genre, the Impressionists.  There was also a special exhibition on the later work of Matisse that’s quite fascinating.  Don’t miss it!