Below are pictures of Welsh countryside as we enter the region – pastoral splendor!  It’s

We decided to splurge and stay in a real castle; how cool is that!  The Roch Castle was built by a Norman knight in the 1100’s as an outer defense of “Little England”, an English-speaking and English-culture region within Wales near Pembrokeshire.  As shown below, it’s a real castle in all respects but remodeled to be very comfortable on the inside.  We loved it!

The views from the castle ramparts are impressive.  Long-term readers of this blog (should there still be some!) will know that I am enamored by how changes in sunlight and clouds affect the colors and moods in which we see the world.  In a small way that effect is shown below – pictures of the same general areas, taken from the castle ramparts, a half-hour apart.  Set 1 is here, before sunset:

Then, in the glow of sunset:

Small but beautiful changes!  Not bad views, with a glass of wine in hand.  In a  castle.

The castle’s breakfast menu is shown in the first picture below.  Yum!  Laverbread, by the way, is a Welsh national delicacy made from a particular seaweed, coated with oatmeal and fried; it’s healthy and really good.  That evening we had dinner at the castle’s

associated restaurant, a complimentary taxi ride away to the nearby town using Wales’ two-way one-lane roads.  Don’t drink and drive!  Our meals are shown above; the Welsh eat pretty well!

Porthgain was a prosperous industrial harbor in 1850, when it exported slate from its own quarries and several others.  It had a water-powered mill that sawed the quarried slate slabs before shipment.  In later years it turned to brickmaking, and later yet to crushed 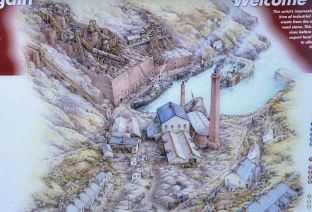 roadstone, until in the 1930’s it could no longer compete in the modern world.  Today the harbor is dominated by the ancient large brick hoppers that were used to store the crushed roadstone.  In that last picture above, the large opening there at the left is a tram tunnel.  When the quarry got too deep and it was difficult to extract the slate and waste, this underground tunnel was built to deliver it to the harbor.  Doing all that tunnel digging by hand – through rock – boggles my mind.

The harbor is still home to local fishermen.  We stop at The Shed, a small bistro on the harbor, where we have a simple but quite impressive late lunch.

We decide to walk along the harbor past the ancient hoppers; it’s getting late and it’s still overcast and gloomy, but the rain is at most a thin mist.  The wind, however, is strong and 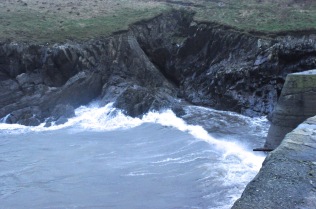 gusty, and that’s a problem.  A cliff-edge walk in strong winds, with a pounding sea below, is maybe not a great idea.  Indeed, a number of locals have warned us not to be on the Coastal Path in windy conditions.  Still, we’ve come all this way, and just past the hoppers there’s an access path going up the ridge to a gate marking the Coastal Path.  How can we not do that?  Against Ginger’s better judgement, we take a quick hike up the ridge so we can at least see this Coastal Path.  The track up is muddy and slick, and Ginger decides to stay put at the top; I want to explore a little further – I’ll be careful, and be back soon.  Ginger asks for the car keys, just in case ….

One striking observation is the number of abandoned stone houses along the path.  They are each pretty isolated, and obviously old.  Although Bronze and Iron Age settlements and 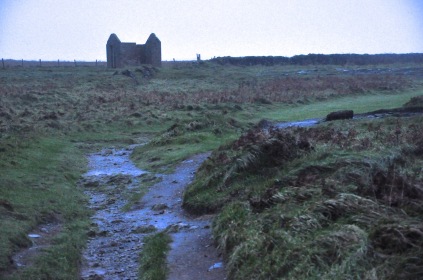 Norman castles can be found along the Coastal Path, I suspect that most of the abandoned houses I’m seeing are from the more recent slate mining period.  But doesn’t that building in the middle picture look a bit like a castle?  Alas, no time to stop and poke around.

The coastal scenery is twilight-gloomy but very impressive, as shown below.  Those white pillars on the headlands are called “The Beacons” and were built to guide ships into the

narrow entrance of the harbor.  That abandoned building/farm that we saw earlier in that previous set of pictures is also shown in the last picture above.  It looks interesting and I’m drawn to it, in spite of the fear of going on.  No, I’m not fearful of dying by being blown off the cliff; I’m afraid Ginger is gonna kill me for taking too long.

The abandoned building/farm is shown below.  It’s pretty big!  Nearby is a small 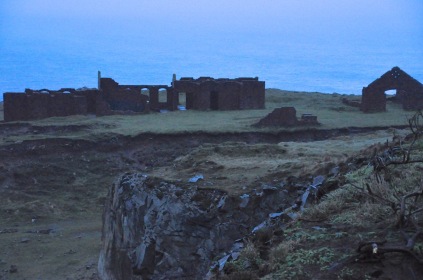 Well, it is time to trot back to the waiting Ginger.  Yep, in good weather this Coastal Path would be outstanding.  As I head back, I see a lighthouse that has come online (shown below).  Finally there’s the path down to Porthgain; hopefully Ginger is patiently waiting below, but she did take the car keys …. 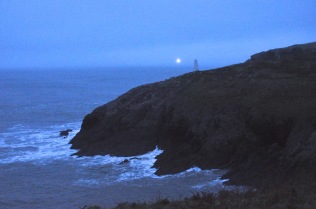