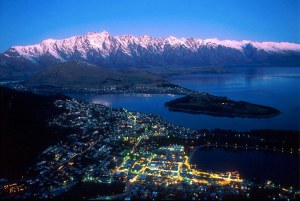 the country’s premier commercialized resort town.  It’s also beautiful, nestled at the base of mountains and looking across gorgeous Lake Wakatipu to the craggy Remarkables range (see image from the internet to the left).  You might enjoy a pilot’s video of the area as he lands a small plane at Queenstown airport.  The link below will open the video in a new window – it’s about 4 minutes long.  http://www.chonday.com/Videos/pilotnewzdalnd1.

Quite a location, but we thought the city itself was a flawed jewel, at least for old fogies like us: it was crowded, touristy, and filled with stores heavily marketing every adrenaline-fueled activity known to man.  It’s a place for young people with a lot of  money to spend on flying, falling, floating, speeding events – and the price for each was hundreds of dollars.  Ginger wasn’t really keen on any of it.   So we took a pass on the adrenalin rush, and went instead for the surrounding beauty:  the Routeburn track and a visit to historic Arrowtown.  In this case “we” is three of us; my sister Linda, from Albuquerque, joined us in Queenstown and will travel with us for awhile.

First, some pictures of the area coming into Queenstown.  It’s austerely beautiful.

Next a few pictures from the Queenstown shore.  The last two pictures show the same scene under different light – always amazing how different the colors are on different days.  The light is somehow special in New Zealand – a painter’s light, often with a golden glow.

While we’re discussing Queenstown and light, let me show you some views from our apartment as the sun starts to set.  It was pretty nice. 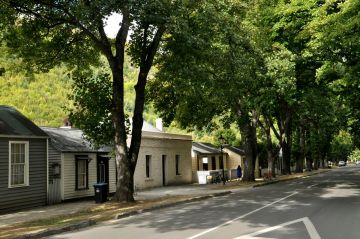 Arrowtown, only 10 miles from Queenstown, was born when gold was discovered in the Arrow River in 1862 – lots of gold.  One of the early prospectors was able to keep his lode secret while recovering 200 lbs. of the stuff.  The area became known as the richest for its size in the world, and at its height it was a town of 7000.  Today the population is 2400, surviving on the tourist trade and doing quite well.  It’s a nice-looking New Zealand town, with one of its highlights being the Avenue of Trees shown above.  Those trees were planted in 1867 along the line of tiny miners’ cottages that have been preserved.  More views of the town are shown below. 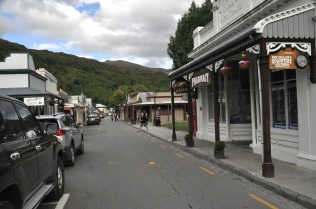 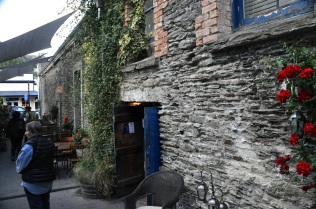 One of Arrowtown’s claims to fame is its Chinese history.  After a few years gold became harder to mine, miners left for newly discovered gold fields on the West Coast, and Arrowtown was left with businesses but few customers.  The solution was to import Chinese to the gold fields – as stated in the local newspaper, “An increase in population, even were it in the shape of chimpanzees, would be preferable to no population at all.”  By 1870 there were 5000 Chinese in Arrowtown, living in a segregated community, forced to work abandoned mining claims or the tailings of European miners, or working for half what a European earned.  Despite the racism, the Chinese were known for their “sober, upright and straightforward” conduct.  Arrowtown has the best preserved Chinese community in New Zealand. 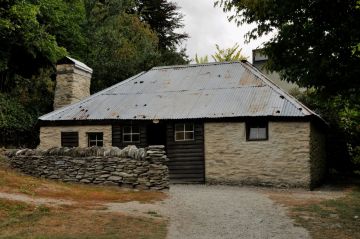 The best preserved building is Ah Lum’s store, built in 1883.  Ah Lum was literate in English and became a pillar of the Chinese community; his store sold both European and Chinese goods, operated as an opium den, and was a bank for the Chinese.  The loft also provided accommodation for travelers.  The compact floor plan, and an interior area, are shown below. 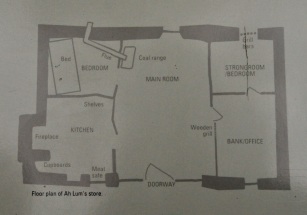 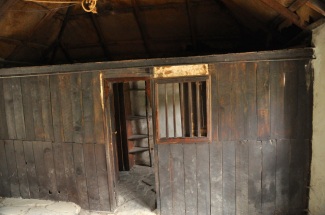 The (restored) Chinese miners’ huts are incredibly small, intended as temporary structures, with tin, sod, stone and timber the principal materials.  The huts became permanent as the miners aged and were unable to return home.  Pictures below. 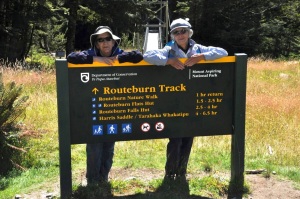 If you remember, we “did” the Routeburn Track in a previous post  (April 20, “Leaving Milford Sound – the Routeburn Track to Key Summit” [clicking on the title will take you there in a new window]).  “Did” meaning we climbed part-way up one end of the trail.  Now we will go part-way up the other end of the trail – unfortunately leaving unseen the really, really pretty part in the middle.  Alas, such is the sad fate of those unwilling to carry heavy backpacks for days.  Still, the trip promises to be pretty.  The Routeburn is one of NZ’s Great Walks, and one of its finest.

Actually, just getting to the trailhead is pretty spectacular!  It’s at the other end of the long Lake Wakatipu, and the lake’s color changes along its length, and undergoes amazing 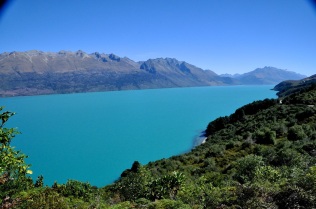 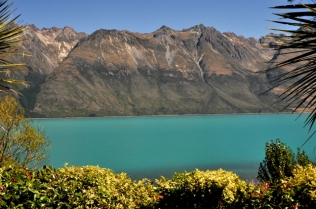 changes from day to day (that NZ light!).  The head of the lake is even more beautiful, as shown below.  In fact, it’s beautiful enough to have caught the attention of movie

producers, and the area appears in films like The Chronicles of Narnia, X-Men Origins, Lord of the Rings and The Hobbit.

The Routeburn trail at this end goes steadily uphill following the beautiful Route Burn river, which is very clear with a somewhat turquoise cast. 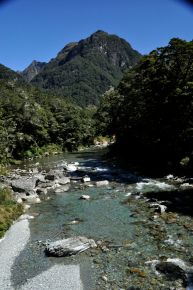 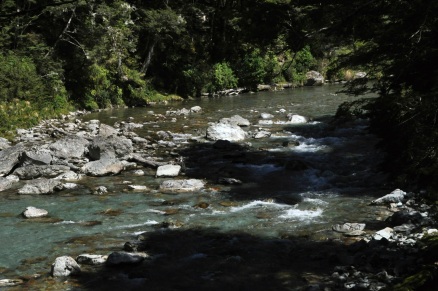 I love being serenaded by a musical river, so this is a treat!  The trail itself is a regular highway, but a little rocky.  However. it’s sides are very green, covered by an enormous variety of ground covers and moss.  Very large mossy rocks are common, along with some rougher rocks that, typical of NZ, have veins of different materials, making them interesting.

The water coming gallumphing down over rocks is beautiful.

We’ve been walking for a couple hours now, and the ladies need a restroom break.  We’re not the only ones on the trail, so this is a bit tricky, but we find some house-sized boulders close to the trail that will provide the needed cover.  Okay!  Biology attended to!  Off we go, 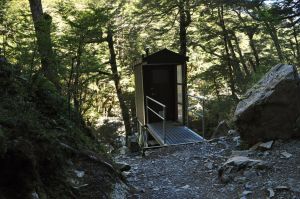 a whole 25 steps around the boulders, and lo and behold what should we see before our eyes?  Yep, the luxury of a very nice outdoor toilet, the distance from the trailhead almost perfectly calibrated for the needs of a female walker.  Almost.  Maybe 25 steps too far, actually.  How funny was that?

After a bit more we come to a pretty part of the river and the ladies decide they have had enough hiking.  I decide to hike up to the first hut, which should have a nice view.  The trail continues to be pretty, with a forest of ferns under the trees, and a nice beech forest. 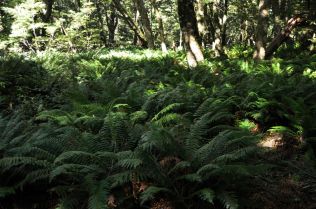 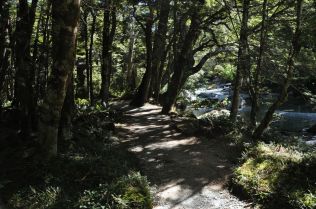 The trail opens out to a beautiful meadow, and then I’m there.  I didn’t take a picture of it, 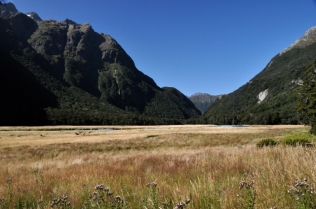 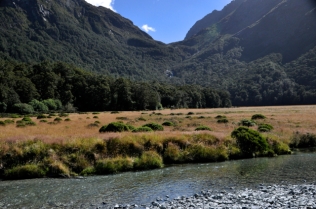 but the hut itself was pretty spiffy.  I’m used to rustic lean-to structures.  This was a four star fancy building, doors and wood bunks and all!  The surrounding meadow is gorgeous, with clear stream, impressive mountains and a waterfall.

As I head back, the Route Burn River is illuminated by beautiful, slanting late afternoon light.  An added bonus, I see several diminutive Rifleman birds. 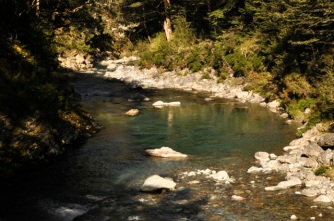 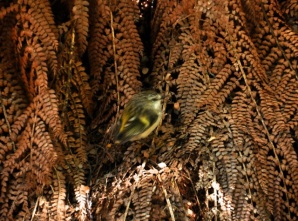 That’s it!  Pretty but not spectacular.  Alas, the truly gorgeous views are in the middle section that we did not hike, but I am content.

Next stop, the glaciers!