Hmmm.  I debated whether to give you a change of pace from Modernista homes along the Passeig de Gracia – there is soooooooo much more to show off in Barcelona! – but decided that these interiors are a natural follow-up and sufficiently interesting that you won’t get bored, so here we go!

We’ll start with one of the finest Modernista interiors in town, that of Casa Lleo Morera by Domenech/Montaner, built in 1905.  What?  A whole blog devoted to just one building’s interior?  Well, you’ll see; it’s definitely interesting.  I’ll call it “Great Mainstream Modernista”.  The pictures below should jog your memory of this house and its ornate

Entry is into a vestibule, guarded by – yep – more attack parrots, shown at the upper edges

of the door (for a better view, right-click and “view image”).  You will note from this picture that the vestibule interior looks pretty ornate!  Yes, but it’s ornate with a purpose.  The Morera family wanted the building interior to reference their family name, which means mulberry tree, and that reference is everywhere – exuberantly.  From the entry, marble stairs lead up to an original elevator (the first in Barcelona) and then continue up to an entrance hall.  I didn’t take a picture of those stairs, so I cribbed the first picture below from the Casa Morera website.  Those flowers on the stair risers are mulberry tree flowers, and the mosaics and tiles

along the walls are the same.  The fancy ceiling mosaics show mulberry and other flowers.  It’s pretty fancy – a bit much, really – but as one continues up the stairs to the entrance hall, the decoration gets simpler.

The entrance hall – also the waiting room for Dr. Morera’s patients – to me seems a bit strange.  It’s a small room broken up by 6 doors, with the doors being heavily bordered by protruding stone sculpture.  The undulating ceiling doesn’t help.  Fear not, there is beauty

yet to be seen!  A hint of what’s to come is shown in the nice mulberry designs in the door woodwork.

Two of the entrance hall doors lead to (interconnected) drawing rooms where the family would receive visitors, each room with a view overlooking the prestigious Passeig de Gracia.  The first drawing room is absolutely gorgeous, the more so when you can see it all at once (sorry about that!).  The floral themes are everywhere – on walls, woodwork, stained glass, ceilings – it’s delightful, like being inside a bouquet.  The carved and inlaid

wood ceiling is spectacular, its carved roses reflecting the theme in the stained glass, while the inlaid mulberry flowers reflect the theme in the wallpaper (and floor).  Oh, but there’s more to see in this room!  Enjoy more flowers with the fireplace, wood carvings and floor

mosaics!  The wood carvings are exquisite.

Well, it’s hard to beat that gorgeous room, but the adjoining drawing room also has its charms – particularly the beautiful wood inlay.  The use of different kinds of wood in

subtly different shades at times gives the feeling that the design was painted rather than being wood inlay.

We’re back in the entrance hall, looking at the stone carvings over doorways.  To me they’re too much for a small indoor space, but at least some of them involve a story from a 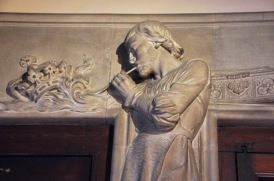 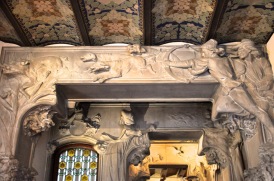 lullaby, “The wet nurse and the king’s son”, where the Virgin Mary works a miracle by bringing the king’s infant son back to life after the nurse left the child too close to the fireplace (that’s a lullaby??).  The lullaby apparently had some meaning for the Morera family, whose first son died soon after childbirth.  That last picture above shows a hall (with more stone reliefs) leading to the Morera’s living quarters – bedrooms, dining room and smoking room.  Some of the stone reliefs are shown below, including Barcelona’s patron saint St. George (protector of the home) defeating a dragon.  The mosaic floor and

The bedrooms are plain by comparison, but still with profuse flower motifs.  The first two pictures below show Dr. Morera’s bedroom, the next two his wife’s.

The dining room is a continuation of the hall and separates the two bedrooms.  It’s a fabulous, very interesting room, and it was very personal for the Moreras.  The room is surrounded by 8 wall mosaics showing the Morera family enjoying life in the countryside over the 4 seasons (I’m showing you just 4 mosaics).  Interestingly, the mosaics include porcelain hands and faces, I guess to more accurately depict the Moreras.  In addition to

the mosaics, the surrounding wood carving and inlay is gorgeous as usual.  It’s a magnificent room.

The next (and last) room in the house is the smoking room, which is floor-to-ceiling stained glass!  Originally there was a sliding wood door between it and the dining room;

now it’s one large (and spectacular) space that nicely complements the rural themes of the dining room.  Such a large expanse of stained glass is simply dazzling, and its semicircular construction works to immerse you in the scene.  Pretty fabulous!

This was the last room of the house that we’re allowed into, but there is also a patio, accessed via a door in the stained glass wall.  Here we have an entire mulberry tree

in sgraffito, along with other mulberry references.  Down below at street level (seen through the grate) there’s a real courtyard that we don’t have access to.  Turning around, we see the beauty of the smoking room windows from the outside, but – surprise! – there

are 3 more floors of Casa Lleo Morera!  All with their own semicircular stained glass walls!

We exit the way we entered, the stairs circling around the elevator shaft that also cleverly 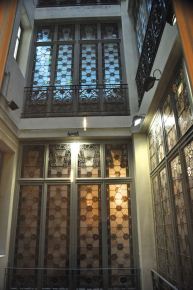 Well!  I hope you thought a “classsical” Modernista interior was interesting.  The next post will show the interior of the other major building on the Passeig de Gracia’s “Block of Discord”, Gaudí’s Casa Batlló.  This other vision of Modernista is very different from what you’ve seen; rather than “classical”, I would call it “futuristic”.  You’re going to love Gaudí!