This is about Sevilla. However, I think this entire Andalucian region needs some introduction. So this is going to be long, and talk about history with my novice understanding, so skip to the next section if you don’t want context.

Sevilla was fascinating, especially the Alcazar. Unlike the U.S., there is an enormous strong link between history and the architecture one sees. Especially in Andalucia, where the Muslim and Christian cultures fought so hard during the (400 year long) “Reconquista”. Let this non-historian give you some non-studied history, not because I have any unique insight, but simply because this history/architecture link hits you between the eyes, and can’t be ignored. First came the Phoenicians, for which not much remains, mostly stone walls, and that visible only from excavations – usually inside a building and below ground. We’re talking 6th century BC. Digging foundations for a new building here usually means a delay for an archeological investigation, and the middle of a hotel’s dining room can have a fenced-off section of Phoenician walls. Then came the pagan/Christian Romans, and their visible stone foundations are often a part of the “newer” buildings – not to mention the occasional amphitheater or remaining vertical columns of a temple – or their architectural influences. Then came the Visigoths in the late 300’s, and they were Christian and did more destruction than building, apparently. It would appear to this pagan that the primary usefulness of Visigoths in this region of Spain is that of a foil for the Catholic church to argue that Moorish structures are a temporary aberration in time and less important with less rights than the continuous development of Christianity. History here seems to be physical and real with issues somewhat similar to water rights in the American Southwest. A Catholic church that has Moorish parts runs into discussions when alterations are desired. 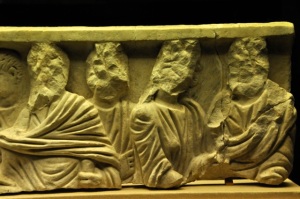 Christian churches and knocking the faces off sculptures of humans since the Koran doesn’t like that. And the Koran says to wash up before entering a city or church, so water was piped to plentiful public and private baths, as well as patios and fountains and gardens. And the spaces, decorated without depicting animals or people, are very geometric and intricate, seldom repeating, and are everywhere, providing a jaw-dropping feast for the eyes and a tranquility for the soul.

The Moors came to this region of Spain in the 700’s or earlier, where much of the architecture we see was begun. Moorish kings got really wealthy with trade between Africa and Europe (and their own silk business) and built fabulous palaces (and needed fortresses). A lot of this really beautiful stuff was built between the 1200’s and 1400’s. So we’re talking about use and re-use for 500 years or longer, without much sprawl (being close to the fortress had some advantages for survival). If you’re doing any historical restoration, it’s hard to know at what time point you want to go back to. Anyway, as Europe trudged through the Dark Ages, Moorish magnificence and intellectual thought bloomed. And it’s still here to see!

And then came the Reconquista, and Christian Spain North got united (with Austria) and began reclaiming the peninsula. It was slow going for 400 years! As Muslim city after city fell, the victorious Christians, having lost many lives, wanted to make a statement to remaining residents, and typically leveled the mosques and built YOU’RE CHRISTIAN NOW! churches that are pretty in-your-face. Except where the Moorish mosques were so incredibly beautiful that they couldn’t in their hearts tear it down. So some of it is preserved. In Cordoba they built this humoungous Catholic church smack in the middle of the mosque, preserving a bunch of the mosque, but we’ll get to that in another posting. What one sees today is a striking juxtaposition of this beautiful Moorish poetry in architecture, with typically bombastic Catholic architecture that took a hundred years to build (thus incorporating all the successive architecture in vogue, Gothic to Renaissance to finishing touches in Baroque), gilded in gold, big and ostentatious.

Today what one sees is remnants of the Moorish world starting from 900 or so, the older stuff typically walls, Moorish baths, and water-delivery systems (see Ronda), with that same or nearby space occupied by a subsequently flourishing Muslim world until the late 1400’s (and amazing parts of that world of the 1200-1400’s still preserved). Let me show you some of them in subsequent posts!