Kia Ora (that’s Maori for hello or welcome).  Waitangi is just north of us in Paihia and is historically the most important place in NZ due to the signing of the Waitangi Treaty there in 1840.  This treaty bestowed British citizenship on the Maori and subjugated them to British

law while supposedly protecting the Maori’s land and interests.  As I mentioned in an earlier post, this document is central to current day discussions over land issues.  Kiwis see this as the equivalent of the US Constitution.  Maori see this as a very different document than the one they signed in the Maori language; in the English version, Maori land and interests were anything but protected.  The Maori chief, Hone Heke, who was the major proponent for signing, was also the chief who, 5 years late,r precipitated the Northern Wars.  Heke expressed discontent over a period of a year by chopping down the British flagstaff flying over the nearby town (Kororareka) on 4 separate occasions.  The last time was too much, war broke out, and Heke and other chiefs took the town; in clashes it was burned to the ground (to be resurrected as Russell).  I mentioned before that the Maori were a warrior society, living in or near fortified hilltop pas.  Male children were trained to be warriors starting at age 5.  Maori were good at war, with constant practice (raids on other tribes).  They were a Stone Age culture; weapons were wood spears and sharp-edged jade clubs.  With European arrival, they also acquired muskets; these were quickly seen as a huge advantage in their wars, and an arms race was on.  Many Maori artifacts in museums are the result of trades for muskets with Europeans who treated the artifacts as art objects rather than tools.  We’re talking giving up a Maori tribe’s treasures, even war canoes!  Missionaries came under huge pressure because they were reluctant to engage in musket trade.  One of the Maori chiefs, Hongi Hika, went to London where he had a meeting with the King (!), who gave him a suit of armor, which on his return via Australia he traded for something like 400 muskets.  So when war broke out with the Europeans, the result was predictable but did not come easily.  Usually Maori were outnumbered at least 2 -1, but still managed to win half the battles!   It was not unusual for the British to lose a third of their assault force, with the Maori warriors  slipping away under cover of darkness.  Some of the major battles the Maori lost were due to other Maori tribes joining with the British forces (to settle previous scores). 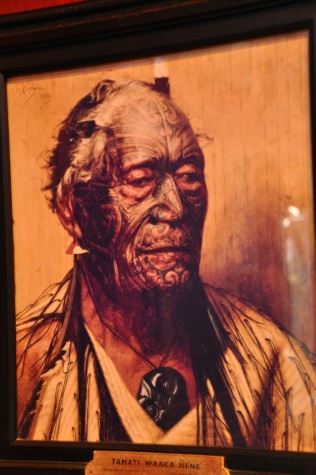 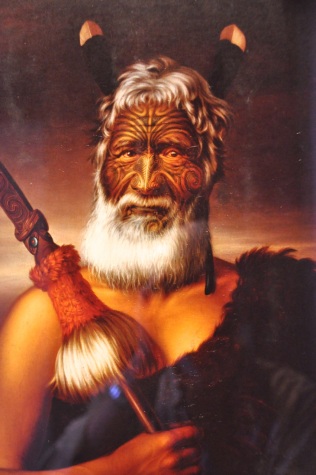 These guys were on opposite sides, and I only show the pictures because I find the facial tattoos to be fascinating.  The Northern Wars lasted a year, the final fight showing Maori ingenuity.  Presaging WWI, in response to overwhelming British firepower, they built gun-fighting trenches and tunnels and withstood 10 days of cannon bombardment and attacks before finally being breached.

Let me show you some of the area around Waitangi before going to its cultural center.  The area below is one of the oldest European settlements with buildings still standing (eg, the whaling taverns and brothels in Kororareka were burned down).  An early missionary establishment next to the pa of Hongi Hika is shown in these pictures.

That’s the earliest wooden house in NZ, the missionary house (Kemp house) built in 1822.  The missionaries brought new technology and agricultural methods to the Maori, and hoped their religion would also be adopted.  The Stone Store is right next door and is the oldest stone house in NZ, built in 1836 to facilitate trade with the Maori; it’s a (tourist) store today, containing pretty much the same contents as would have been sold then – burlap bags, hand-made nails and so forth.  The interior of these houses is surprisingly modern to be there in the middle of nowhere, as shown in the images below:

And then it hit me – we think our country is young!  This place is a baby!  Walking through the missionary house I was struck by how much it reminded me of the time I lived in an old house just off Market St in downtown Charlestown SC (around 1955), in a house that was probably built before this one (although our furniture wasn’t that good, the kitchen was a little better …).  Connecticut has a stone house that is 200 years older than their stone house – a difference in years that exceeds Kiwi history in NZ!

OK, shifting gears back to the burnt town of Kororareka, rebuilt as Russell.  It’s a quaint little town across the bay, about 2 blocks by 2 blocks, with a single house (missionary) spared in the burning.  Pictures below: 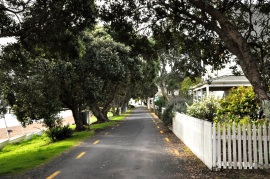 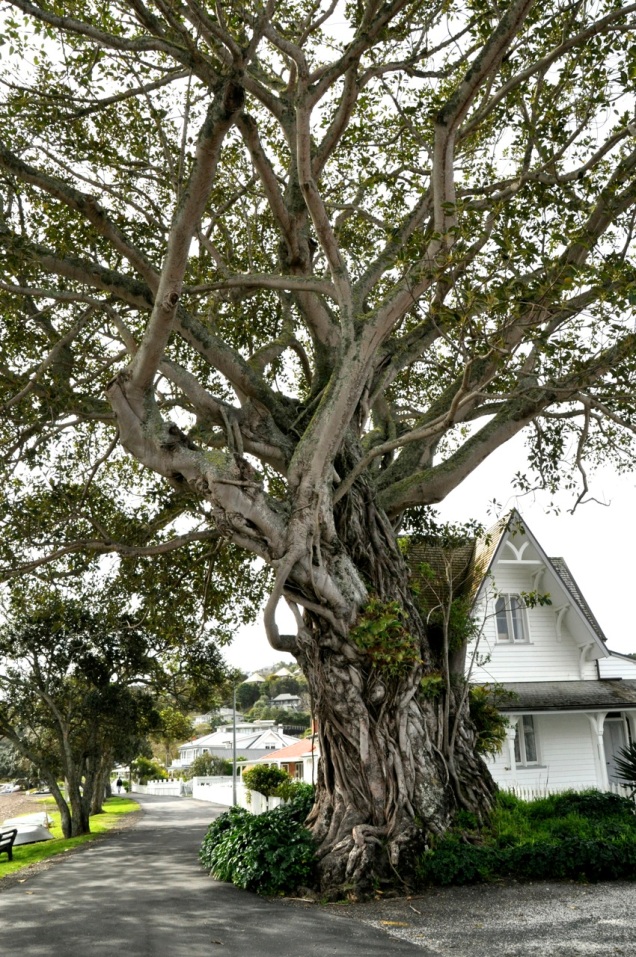 One of the buildings there is the Duke of Marlborough Hotel, the oldest hotel in NZ, with liquor license #0001.  It’s pretty nice; we had lunch there on the veranda. 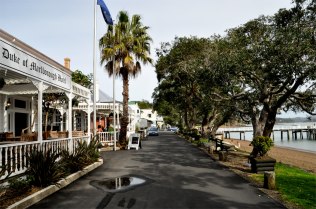 Finally, a view of the Waitangi treaty grounds.  They have a Maori meeting house, the signing house, and a war canoe.

We took in a performance of Maori culture at the meeting house; we were met by Maori warriors emerging from the meeting house fully armed & doing choreographed movements, chants, vocalizing, all the while demonstrating their prowess with their traditional weapons; this was meant to be intimidating and a challenge, and was it ever! 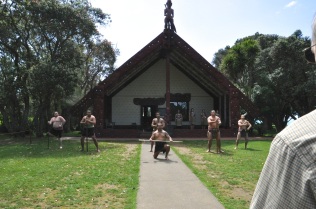 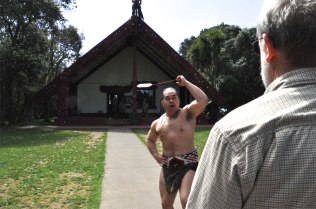 Especially for me, having been chosen the “chief” of our of little group and being the object of their feints.  After doing their challenge, one of the warriors laid a “gift” – a palm-like branch – in front of me, to pick up if we came with peaceful intent (otherwise they probably eviscerate me on the spot).  We were then welcomed into the meeting house with song and dance.  Inside, a ritual song & speech of welcome followed, and I had to respond with my own speech, followed by the hongi, the simultaneous touching of foreheads and noses together & the symbolic exchange of breath with their chief.  Much song & dance with explanation followed, along with demonstrations of weapons use and games with sticks that improved limberness, hand/eye coordination etc.

One song started as a solo, finished as a duet, and even though it was in Maori, its beauty and emotion moved Ginger to tears.  A final group photo. 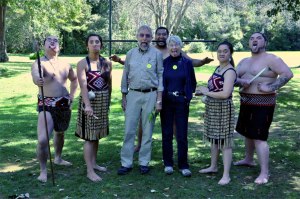 Well, I know, this has been a long post, but let me add a final “art” photo – an unfurling frond from a tree fern.