We’re off to see some Kauri, the world’s 2nd largest trees.  With some regret we leave that gorgeous apartment in the Bay of Islands, home for 10 whole days.  Quite a luxury, that length of time in one spot, but it was some good R&R and allowed me to get this blog functional, finally.

I’ve shown you a few pictures of the gorgeous Northland in earlier posts – green green green, impossible shades of green, rolling hills to mountains or ocean.  It’s really spectacular, and yet we know it is not the prettiest part of NZ.  Save the best for last, they say.  Let me show you the journey to the Waipoua Forest before I tell you about the Kauri.  Ladies and gentlemen, the land of sheep and cows.

I can’t leave you without a picture of NZ’s most numerous resident, can I?  They’re

everywhere, dotting the landscape as beige blobs on a green background.  Cows too, in this neck of the woods, but they’re less photogenic.  Apparently many residents outside the cities use cows or sheep to cut the grass.  No need for a lawnmower.  This was the case for the B&B we’re headed to, but a part of me thinks of the ditty about the little ol’ lady who swallowed a spider.  I’m betting the lawnmower is less work.

Of course there is more to the Northland than gorgeous green hills.  One is never

far from water!  Here are a couple shots from Hokianga Harbor.  Looking out to the Tasman Sea, the incoming waves are ferocious, true for the entire west coast of NZ.  The smaller images look across the harbor to (big) sand dunes.

OK, on to the kauri.  Today they only survive in NZ.  The Northland and regions slightly lower were once covered by these magnificent pine trees.  They can live to be 2000 years old, reach 150 feet, and be 60 feet in diameter.  The Maori used smaller kauri for their war canoes that could hold 100 or 150 fighting men (and a village didn’t need too many of them!).  Then the Europeans sailed in.  The trees are straight as an arrow, and the Europeans saw the younger trees as perfect for tall ship masts.  Later, the straight-grained, durable, blemish-free, easy-to-work and beautiful wood dominated the NZ economy, supporting many cities.  Getting those monstrous logs down to sawmills was quite a challenge, and Northland still has remnants of small dams (some 60 feet tall) that were built and then demolished to send these trees crashing over waterfalls and down mountains.  By the early 1900’s, the trees were almost all gone (and with them, the economies of most of Northland’s cities). 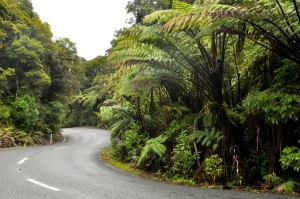 75% of all surviving mature kauri trees exist in just two forests, together covering only 60 square miles.  The Waipoua is one of those and has the oldest kauri.  The biggest boy is about 2000 years old and has a name, Tane Mahuta (Maori for “God of the Forest”).  I’ll show him to you a bit later.

The forest is fascinating, with moss everywhere and epihytes 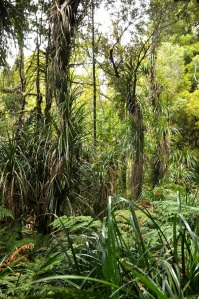 everywhere else (epiphytes grow on trees but get nutrients from air and rain).  I’ve seen epiphytes before, but not where they totally obscure the bark of a tree, all the way up!  They are varied and beautiful.  Something that resembles Staghorn fern, or maybe it is Staghorn fern, is frequently seen in the trees.

The walk through the forest to the big Kauri is magical!  It appears to us to be a tropical forest.  This is definitely not Kansas!  Today it is of course raining in a drenching kind of way (hmm; are we being taught why they call this a sub-tropical rainforest?), but we are undaunted (expecting the rain, we carry umbrellas).  A couple pictures of the hike below: 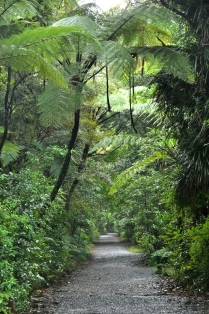 The kauris are magnificent.  They have a whitish bark, the younger ones look like growing 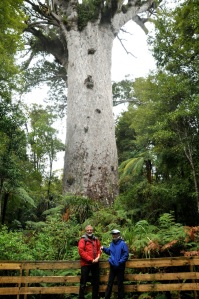 telephone poles, and branches do not occur until you have craned your neck ‘way back.  The big guy (picture to side) is, of course, Tane Mahuta.  Others are also quite striking, as shown below.  I confess, I think the California Redwoods are more spectacular.  For me the redwoods have a cathedral-like quality to them, and I feel a quiet reverence in their presence.  They are also more numerous and taller, and pretty much all by themselves; you are surrounded by the pillars of that cathedral.  The kauri, on the other hand, are here and there and surrounded by a riot of almost-jungle.  Nevertheless, the kauri are so very old and so very massive, yet still so very beautiful, and the thought that they were almost eradicated from this world in order to make a buck is sobering. Respect your elders – isn’t that a Maori prinicple?  Pictures below. 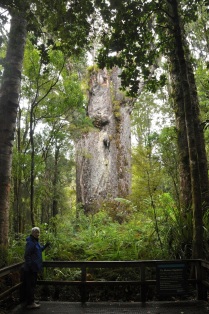 One comment on “The Northlands – Bay of Islands to Waipoua Forest”