Rotorua is a big tourist attraction, similar to Yellowstone Nat’l Park. It’s a geothermal area with geysers and smoking holes, sulfur and bubbling mud, hot springs and spas.  It’s also a Maori center; they own some of the thermal sites and take advantage of the influx of tourists to promote traditional cultural performances including hangi, a Maori feast where the food is cooked by burying it underground over hot rocks. We’ve done the cultural thing before (Bay of Islands post) but wanted the hangi, so we’ll look at another iwi”s (tribe’s) traditions. There are several performances/hangi available from different groups; we choose the one that houses the Maori Arts and Crafts Institute for teaching and preserving the Maori carving and weaving arts.

Yes, I’ve shown you Maori culture before, and so some of this post will be repetitive; my apologies, but it is an interesting culture.  In spite of the frequently barbarous practices of these Stone-age, fierce, warring tribes (eating the vanquished was real), they created some exquisite works of art.  I’m just going to share the art.

I’ve shown you this type of carving before. These are from an outdoor atrium of Te Puia, produced by the carving school, and they’re pretty impressive.

Our tour includes some geothermal wonders (next post!), and we get to their arts school pretty late; only one student is still working away, but the place is interesting even without any explanation.  Beautiful stuff!

The weaving is also fascinating, but here everyone has left the premises.  Weaving was/is done using the NZ flax plant.  It’s a big plant, kind of like our Spanish bayonet.  The (long!) leaf is cut and used for weaving, or the flesh carefully scraped away (with shell!) to obtain the internal band of strong material and then soaked and beaten to get fiber – apparently a process that is an art in itself.  That and feathers make up the clothes.  From the look of things, this is NOT easy.

Before quickly covering the ceremony and hangi, I’ll show a replica of an early Maori village; pretty simple wood huts similar to our Pacific Northwest Indians.  The carved, elevated storage building kept the food away from rodents.  The last picture is the village entry; a village was no bigger than the fence protecting it.  Such was the life.

The meeting house looks pretty much like others we have seen.  Before contact with Europeans, the Maori had no written language; oral tradition, facial tattoos, and wall carvings recorded their ancestry and history.  The style of carvings and wall weavings varies between tribes, so what we see in this marae are different than what we’ve seen before, but the nuances are lost on us  Those in the know would recognize the tribal differences.

Finally, the ceremony and hangi.  The “welcoming” and other traditional Maori ceremonies to us was  similar to the one in we saw at Waitangi.  Apparently tribal differences are pretty small in this area, perhaps because it was an important part of communicating intent and respect – get it wrong and risk war.  Because this is a big tourist center with competing productions, we were expecting a very polished and professional performance.  Instead, we ended up thinking the more intimate one in Waitangi was better.  Pictures below.

One of the different parts of this ceremony, however, was the chance to be taught some of the traditional dances.  We, of course, were terrific at this.  (Not! ed.) 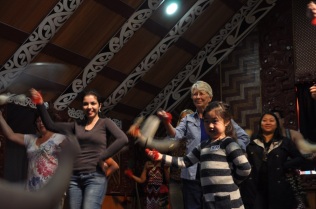 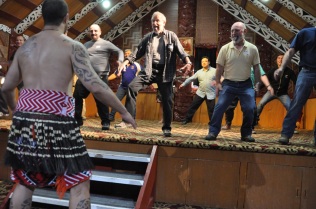 Finally, the hangi.  It was indeed a feast, with the traditional food of several kinds of potatoes, chicken, pork and lamb, but no longer is this a dirt hole-in-the-ground affair!  Now they use firebrick pits and steel covers.  Pictures below.

The dinner was very good, supplemented by soup, salads and desserts, but a bit disappointing.  We had done a Hawaiian luau many many years ago where pork was cooked in the ground after wrapping with banana leaves, and the taste was unique and wonderful.   The hangi had a lot of good food, but alas with ordinary taste, and at a not-ordinary price.  But Hey!  Done a hangi?  Check.

Next post will feature the real attraction of Rotorua, the geothermal activity where hell and the devil appear to be too close for comfort.