Weta Cave is a small shop occupying a corner of Weta Workshop, the company that makes weapons, armor, face (or foot) masks for dwarfs or trolls or Hobbits, as well as scaled city models for the movie industry – in particular, for directors with big budgets like James Cameron or Peter Jackson (Peter helped expand the company).  Think King Kong, Avatar, Lord of the Rings, The Hobbit, Narnia, District 9.  They will make, say, a metal helmet in all its glory for the close-ups, and a thousand copies in plastic for the armies, and make them all look a little used, dinged and smudged.  Their attention to detail is impressive indeed, as are the imaginative thoughts behind, say, the look of weapons in the future or believable elvish design.  Not to mention monster creation.  They can in fact create anything, from 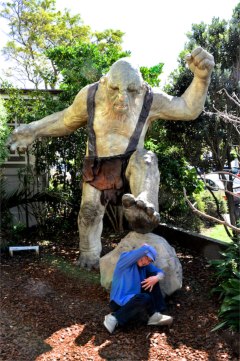 fine jewelry, costuming or creature suits to large-scale tank or other (working) vehicles.  Actually, making these items is just a small part of what they do; in addition to employing a blacksmith and swordsmith and sculptor and painter and mold maker, they in particular employ programmers and computer artists to directly partner with the film director to bring his vision to life, including conceptual design and inventing the technology needed to pull it off.  They’ve expanded into many areas, including creating their own animated children’s tv programs.

They are sufficiently successful that Weta Cave is on the tourist agenda, probably largely due to the Peter Jackson movies and the big interest in Hobbits and Rings.  Weta Cave is free admission – for a reason: all those very realistic plastic weapons and helmets used

in the movies?  Well, those are for sale  … along with very detailed miniature figures downsized from larger models.  Would you like to own an exact, detailed, shiny replica of Sting?  A pitted, corroded Orc sword like the one used in the movie?

I can take pictures in Weta Cave, but pictures are not allowed in the new pay-a-fee tour of  the “behind the scenes” Weta Workshop, since there is new-to-the-world secret stuff being created there.  We jump at the chance to see the Workshop in action.   As it turns out, it is a very limited tour!  We was had!  It’s one relatively small room divided in the middle, and we walk around the periphery … mind you, the Workshop we’re supposedly touring is 65,000 square feet ….  This one room is crammed with stuff, and the (45 min) tour moves too fast to see it all very well, but there are some killer displays of monsters and weapons and such from previous movies, and a discussion of how to paint things to look old and used, or to look like bronze or silver.  We get to see how weapons are cut out by viewing through a glass wall the (computer controlled) robotic milling machine slowly going through its paces and staffed by one person, but that’s pretty old technology, really.  I ask about 3-D printing, and the answer is that it doesn’t have good enough resolution but they are studying it.  We see a few life-size statues of creatures that no one else has seen outside the tour, pretty fantastic one-off’s done for the fun of it – and we talk to the artist making them.  So our tour of the Workshop has encountered one room, one milling machine, one painter (our guide), and the sculptor.  It has been interesting, but it’s a far cry from a real tour of this very creative cutting-edge Company.

OK, enough griping (did I really expect to see someone hunched over a computer designing some movie mogul’s future new monster?  A walk-through of workshops and sets?  An other-worldly city being put together?  Yep!  Sigh.  So goes Hope.).

Let me show you what they have let me take pictures of in the Cave/sales shop.  There are 3 trolls outside, 2 of them shown above.  There is impressive detail incorporated in these guys, which Weta is famous for; for instance, the hair on the troll’s face (and these monsters live outside in the weather!).   The Cave inside is dominated by Lord of the Rings/Hobbit exhibits, which is OK by me.  I’ll start by showing some of the weapons.

The helmets are very cool.  I particularly like the “King of the Dead” helmet, battle-scarred and very authentically old looking.

LOTR – King of the Dead

There are two original armor costumes on display that were made expressly for the Lord of the Rings sagas (at some expense!) that never made it into the film.  Again, the detail of apparent age and the allowances for limb movement are impressive. 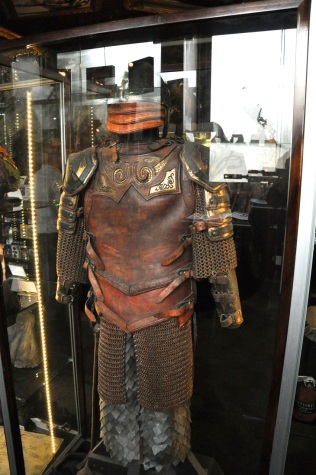 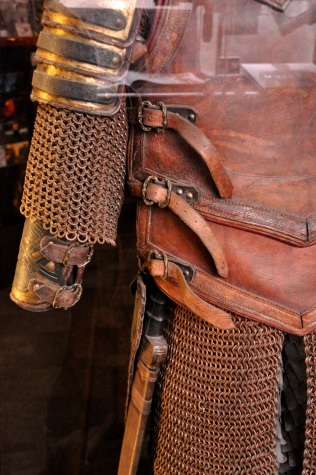 There are a lot of miniature Lord of the Rings/Hobbit statues for sale, all with the Weta fetish for detail.  I take pictures of just a few.

We must not forget Hobbit feet. 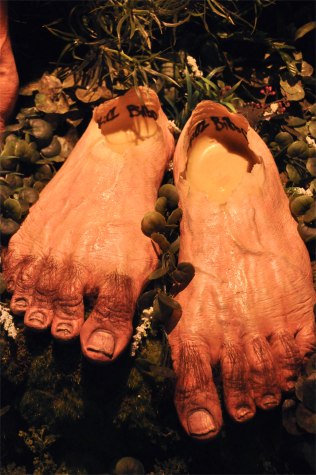 There are also a few life-size statues that are quite impressive, such as Gollum. 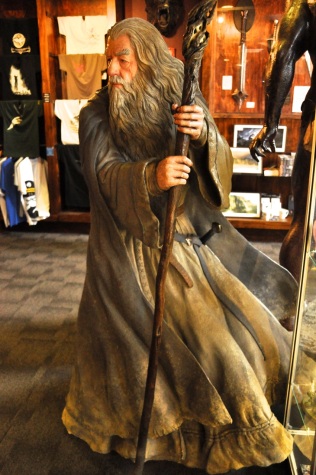 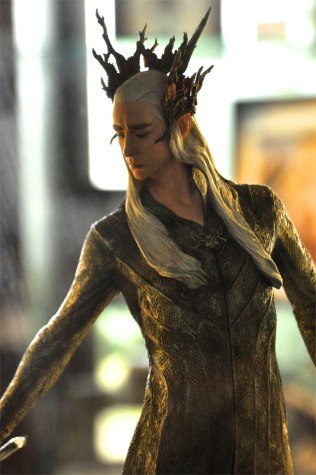 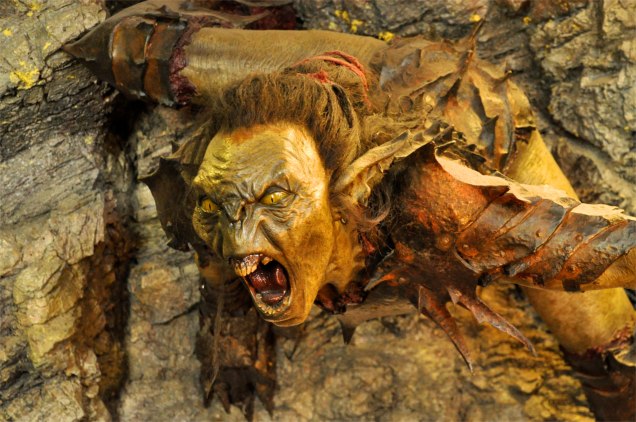 Lutz, leader of the orcs;  he is about 8 feet tall and very impressive indeed! 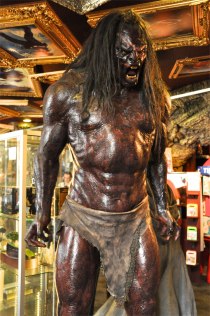 This last cute statue is not in the Weta Cave but in a movie theater nearby, the art deco Roxy  that has connections to Weta.  Notice the small green plants growing on his dirty clothes and feet. 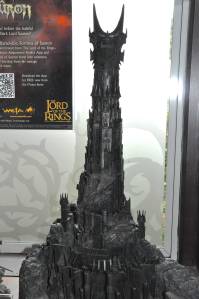 The final Lord of the Rings/Hobbit display is a scale model of the fortress of Sauron.

There are also weapons and creatures from District 9, shown below. 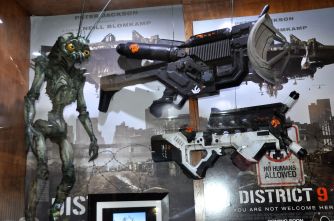 There are other displays, such as from the animated film TinTin, and some I don’t recognize that are quite intriguing and very well done, as shown below.

That’s it from the Weta Cave.  Next post will be on the city of Wellington.