We were pretty excited about visiting Napier.  Not only is it the premier city on Hawke’s Bay and close to one of NZ’s premier wine-producing regions, but it is “the world’s best-preserved collection of small-scale Art Deco architecture”.  When a 1931 earthquake leveled the city (and raised it 6 feet, and created 100 square miles of new land from the ocean), Napier rebuilt in the style of the times, Art Deco.  From my travel guide book, Napier has “a stylistic uniformity rarely seen, ranking it alongside Miami Beach as one of the world’s largest collections of Art Deco buildings.”  We love Art Deco, and couldn’t wait – and boy were we disappointed!!  It’s a relatively small town (54,000), and the qualifier in the 2nd sentence of this paragraph was “small-scale Art Deco.”  Yep.  No building is taller than 2 stories, we’re talking about a couple of city blocks, no metal anywhere, and the buildings look pretty small-town normal, with only some rather

unexciting painted flourishes in the Art Deco style; and maybe a kind-of-Art-Deco sconce here and there; that’s it.  After living in Art-Deco-rich Cincinnati, we know Art Deco, and this is not it.  Phooey!  I took no pictures in my disappointment; to the right is an example of a Napier “Art Deco” building that I took from the internet.

Adding insult to injury, our apartment was a disaster.  One of the lessons of traveling is that the internet lies.  Descriptions of places to stay use pictures that can be enormously misleading.  Reviews can be helpful when they exist, but some sites must allow “cherry-picked” reviews.  Our Napier apartment had glowing reviews.  Not possible!  One thing we

learned is that Napier is very hilly.  Turn your back to the bay, and this is what you see.  The cliff in the picture to the left is a bit misleading; most of the (several!) hills are very steep and pointy and only approximate a cliff face.  For example, the picture below is the view from our apartment – across a gulf to the opposing hill, too steep to build on

(houses on top).  The streets navigating these vertical neighborhoods are very narrow, very twisty, and very maze-like.  Our apartment was 2 tiny rooms in the back of a house, the house near the top of a hill, the road to the house being above the house roof.  Our rooms were in the back of the house (further down the hill), so the very vertical uneven stone steps went forever down to our dwelling.  Our dwelling had a very tiny bedroom with a horrible bed, a living room/kitchen that was no larger, and a bathroom from the kitchen/living room that was a high step up to an elevated alcove.  Not only could you sit on the throne, you could lord it over the place.  I think the word is “kluge”.  We paid good money for this place (up-front).  Somehow we managed to cook a bunch of meals in cramped quarters without killing each other.  Particularly aggravating was the parking arrangement; I had asked about parking (it was not mentioned on the internet) and was told it was on-street parking, always available, perfectly safe, and very convenient.  What was not said was that the street was very narrow, the parking spot located just after a tight curve, and the street got narrower as one went down the hill (don’t go there, we were told).  It was impossible to turn the car around!  There were a few houses with short driveways on the “wide” part of the street, but they had metal posts in the middle of their driveway that they could raise to keep people out.  Clearly we weren’t the first tenants!  So turning around was a half-hour back-and-forth wiggle utilizing portions of driveways, sweating bullets not to scrape the car.   Just backing the car up the hill and around the curve was even harder.  Finally, the internet description said the apartment had a washing machine, but lied; the apartment was far too small to include one.  As it turned out, when I inquired, the apartment’s washing machine was the landlord’s washing machine, so that deception worked out OK – the landlord did our laundry for us.  A requirement for doing long-term travel, dear reader, is to have a good sense of humor.  Or lots of money for fancy digs.

Making up for our Napier disappointments were some fabulous sunsets and Hawke’s Bay wines.  First a sunset.  Not too shabby, eh?

The wines of Hawke’s Bay are impressive!  There are 70+ wineries here in one of NZ’s largest (and much exalted) wine regions.  With a climate similar to Bordeaux, these mostly

boutique wineries (those producing just a few thousand cases or less) produce fine Chardonnay and lots of Merlot (that they often blend with their hard-to-fully-ripen Cabernet Sauvignon).   Of interest to me is their new emphasis on Syrah, which can be wonderfully peppery in these soils.  I loved it!  The Syrahs reminded me of the California Zinfandel wines of old – big fruit up front, pepper on the finish.

breezes – and to have crappy gravel/limestone soil (the best wines here come from an area called Gimblett Gravels, where the soil is mostly a white color).  The need for mountains, however, is a nice plus; not only do the taste buds get to enjoy the wine, but the eyes get to feast on the mesmerizing and timeless mountains.

The wineries here are usually anything but big production: the vines are weeded by hand, the grape bunches are hand-picked, then hand-picked over, then gently pressed.  Many wineries are organic, most are “self-sustaining”, meaning limited/no use of pesticides or herbicides, encouraging beneficial insects, etc.  The business is labor-intensive, often family-owned and operated,

and the wines are usually rather expensive – $30 – $50.  They are also very, very good.  The high-end Chardonnay at Church Road was amazing, as was their Sauvignon Blanc.  Probably one of the best wines we’ve had here in NZ is the Declaration (high end) Syrah from CJ Pask.

And then came the BIG surprise!  On the way to Wellington there is a small wine region that I never heard of, a region that doesn’t seem to have a name but is close to the small town of Martinborough.  Hey, it’s wine, so of course we stopped.  Work, work, work.  This Martinborough region is very compact, something like a dozen small wineries and most of them one can walk to.  It’s the North Island’s coolest, driest, and most wind-prone grape region, but produces outstanding Pinot Noir, Cabernet Sauvignon, Chardonnay, and Riesling.  We loved them.

The wineries deal with the wind by using a lot of very tall windbreaks – this is very common in NZ – as shown.  Normally the windbreaks are perfectly pruned, sides and top, and since they are like 20-30 feet tall, I have no idea how they do it!

It’s a pretty region as well.

Let me show you some of the wineries.  This is Vynfields. 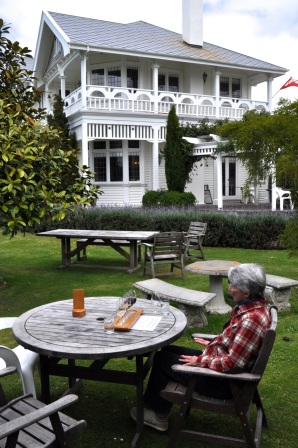 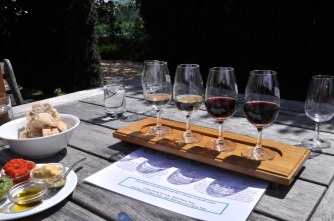 Here’s one of our favorites, Martinborough Vineyard.

Finally, a lunch at Poppies vineyard. 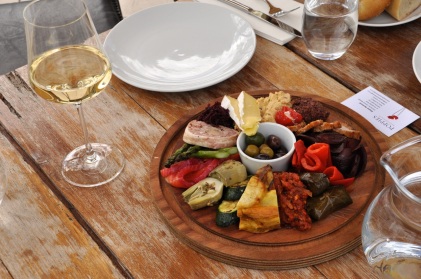 Our favorite wines from this region were Margrain, Martinborough Vineyard, Murdock James and Coney Wines.

As you may have noticed, this post is out of sequence – we did this region on our way to Wellington, whereas the last post was already about Wellington (& Weta).  I initially ignored this part of our trip because it wasn’t too exciting, but I decided it really should be there.  Next post continues with Wellington, a fascinating city not to be ignored.