Before starting out to the South Island’s East Coast, we back-track to Nelson from our outing at Nelson Lakes in order to rent a house.  Why rent a house, you ask?  Several reasons, really.  One, Ginger is getting tired of living out of a suitcase – we’ve been doing this since May, mind you.  Two, it was always our plan to stay for a number of months in one spot to get the real flavor of NZ.  And finally, we’re spending a significant amount of  money (twice what we would spend in the US!) for lodging in generally small and unimpressive motel rooms.  Renting a furnished house would cut our daily lodging costs more than half, although rentals are for a minimum of 6 months and do not include utilities; still, we think we’ll win the cost battle.  The Nelson area is drop-dead gorgeous, with sun, wineries, beaches, arts, and nearby National Parks.  So here we are.  We looked at several places in Nelson itself, our first choice, but ended up in a fantastic

house in nearby Ruby Bay.  Not bad, eh?  It’s on a hill – wait ’til you see the views of the bay!  So having rented a house, we immediately leave it to explore the top half of the South Island.  I promise Ginger that after the next couple weeks of exploring, we’ll come back to crash – saving the lower half of the South Island for February (the tail end of the busy summer vacations for Kiwis).  I’ll show off our new place in a later post when we come back.

The road down the East Coast is beautiful.  The ocean coast is on one side, big mountains

peaking over the hills on the other.  We’re headed toward Kaikoura, a tourist attraction noted primarily for its location – the sea bed drops swiftly away to the very deep underwater Kaikoura canyon, which attracts sea mammals in large numbers.  Consequently this is a great place to get on a 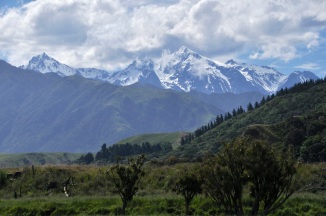 boat to do whale-watching, swim with the dolphins, or swim with the seals – all cool, but none of it inexpensive.  Ginger is not a strong swimmer and has no interest in swimming with fast animals that weigh more than she does, so we’re here just to observe the nearby seal colonies on land.  The first stop is just north of Kaikoura, Ohau Point, home to the South Island’s largest seal colony.  It’s a pretty and rocky coastline, which makes it a great place 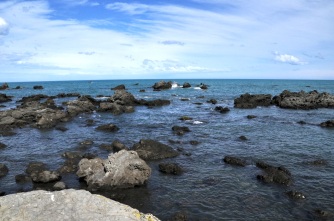 for seals to hop out of the water and work on their tans (right picture, 5 of them).  However, there are certain human traits that these seals possess, such as jealousy; apparently some rocks are better than others, and are coveted.  Therefore discussions 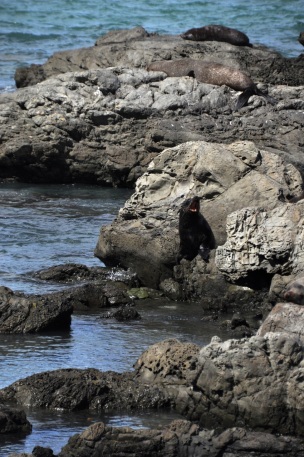 ensue, such as the solo on the left picture above, “Hey, you, get offa my rock”, followed by the duet “I’m gonna knock that seal right off of my rock (and send him on his way)”.  It

seems that the high ground has the advantage, and the mouthy challenger thinks better of things.  Finding his place on a lower rung, he can only look covetously at the upper crust.

The seals are fun to watch.  For animals without feet, they move around very well and pretty fast, using their hind flipper to push off; kind of a high-speed undulation.  They’re also pretty cute, like the guy on the right.  There seem to be two types here, dark black and brown; I don’t know the difference.  One is certainly a

fur seal, of which NZ has a lot.  I’ve captured the interesting interactions of these guys, but the primary activity of the seals is the relatively static and unchanging “sittin on the rock of the bay”, working on that tan.  Not a bad life, I’d say.

I would be remiss if I left you with the impression that all seals are beach bums.  Some can be seen swimming around and honing their skills in a variety of activities, such as the 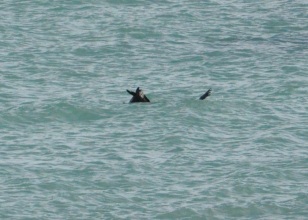 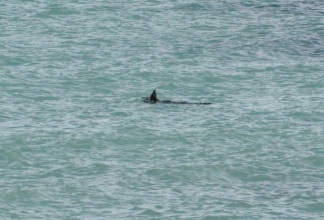 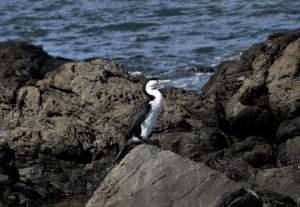 There are other animals of course; birds like the gulls and pied shag, that add color and motion to the relatively static snoozing seal colony.

Turning around we see a very impressive waterfall coming off a mountain that we hadn’t noticed coming in.  We take the Oahu

Stream Walk to it, and not only are we rewarded by the waterfall coming down, but we have company.  An adolescent seal is also enjoying the ambiance, just a few feet away.  He seems unconcerned with our presence, and scratches and preens and rolls around, saying

Finally we reach Kaikoura, and we’re delighted to find that the place is absolutely gorgeous.  In the late

afternoon, the view of the bay is amazing.  By morning’s light, it’s still amazing (below).  If an artist painted the color of this water, you would think he was smoking something.  The water is an impossible turquoise, with purple-ish mountains in the background.  The beach is a

pleasant stroll even if it is not sandy.  Some are on the beach playing with the gulls, others

are just chilling, enjoying the scenery and looking picturesque themselves.

Kaikoura has several seal colonies at various indented arms of its peninsula, and off we go to the nearest one.  That area is also quite pretty, with interesting rocks off shore (left

picture above).  Access to the colony is over a very flat (and long) shelf of rock that will be under water shortly as the tide comes in (right picture above), so we don’t have too long before we have to wade out.  We watch what must be a lady seal stretched fetchingly on a rock, preening and scratching and getting things just right.  Sure enough, shortly along

comes another seal, and they seem to have good communication together; no

confrontation, just nose-to-nose “Hi Babe”.  I can just imagine her saying “Honey, could you go get me a yummy octopus?”  Anyway, in fact off he goes, seemingly on a mission.  He climbs out, bounces over the rocks (and you can see how his rear flipper propels him along), and disappears into the deep water, apparently after something.

Other interactions are much more a negotiation over who gets the best rock.  The

encounter shown above is certainly not the “Hi Babe” greeting, right from the onset.  The discussion is animated, the telling arguments made, and resolution followed.  How things were decided I don’t have a clue.  There was no physical contact, or overt threatening, just some careful circling and one seal says “OK, you win”.  No short straw was drawn, no 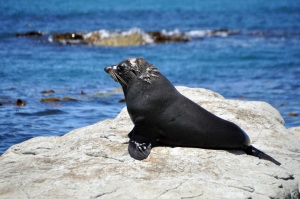 “rock, scissors, paper” decider.  It was clear, however, that the winner was “The Dude”.

We walk a little further around the peninsula.  Normally the seals are on isolated rocks separated from the mainland by a few yards.  We encounter a seal – a large one – that is snoozing on our side of the rocks; I’ll call him “Brutus”.  Travel books always mention that one should not get within about 50 feet of a seal, since they can get irritated, can move much faster than you think, weigh more than you, and they can bite.  Well, these guys look like they’re more dead than alive, lying there motionless, so I approach Brutus,

moving quietly and cautiously.  Apparently not quietly enough.  Brutus raises up, gathers his flippers underneath him, and looks me directly in the eye, quietly, calmly, and ominously.  “Come a little closer, idiot”, he seems to be saying.  I beat a hasty retreat, and on turning around I see the last picture; Brutus has fallen over, lying on his back and laughing like crazy.  Should be a five-yard penalty for taunting, if you ask me.

As we leave the rock shelf (we have to traverse narrow sea streams by hopping on submerged rocks) we look into the tide pools in the creases of the rock shelf.  There’s seaweed and clams and sand dollars and such, interesting, but not even close to the beauty

of the tide pools in our Acadia National Park in Maine, which has more colorful anemones and sea cucumbers and the like.  Take that, New Zealand!

All this running from seals has made me hungry, so we stop at “The Original World

Kaikoura is on one side of a peninsula, and we haven’t seen the other side, so we drive to a high lookout.  It is clouding up; a lot (weather on the NZ island is forever changing).  The

bay off in the distance is mostly in cloud, you can see the bustling city of Kaikoura down below, and the other side of the peninsula is seen to be at least as gloriously beautiful as the Kaikoura side, even in the fog (last picture).  New Zealand is one gorgeous country.

We’ve seen enough seal cavorting, so the next day we explore more coast – which is 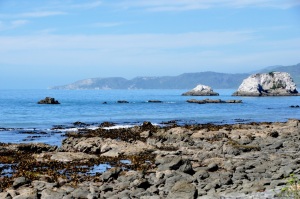 beautiful as always – and we watch the shags for awhile.  They preen a lot, which is not terribly interesting, but the entertainment occurs after they take to the air.  I love watching their landing.  It is either marked by indecision as to what would be the best spot, or it is just the sheer joy of “skippin’ over the ocean”, like a shag. 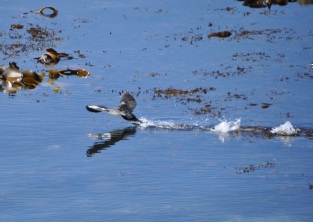 2 comments on “Kaikoura and Seals”