This morning we’re doing that rare thing, for us – taking a commercial tour.  We want to get up close and personal with a glacier, so we’ve booked a bus-hike-boat trip on Tasman Lake where we hope to see some icebergs that have calved from the Tasman Glacier, and hopefully get a close look at the glacier itself.
The weather in this national park is notoriously fickle.  Often a pall of low-lying clouds and rain hangs over the valley, but today it’s supposed to be clear.  From our bedroom balcony the day is starting out cloudy, but as seen below the views are still gorgeous (What a

wonderful wake-up view!).  Fingers crossed for clear skies, we hop on the bus and head toward the glacier.

A short bus ride later we arrive at the trail head (Blue Lakes Trail) and take an easy 20 minute hike across the valley floor.  The sky is clearing, but the land is desolate as far as the eye can see.  As Ginger noted in the previous post, the plain is the moraine from the retreating glacier, the debris is about a mile deep(!), and the fill is very loose.  So in spite of high rainfall, the water just drains through, effectively creating desert conditions on the surface.  It might as well be a moonscape, just gray rock, gravel and dust. 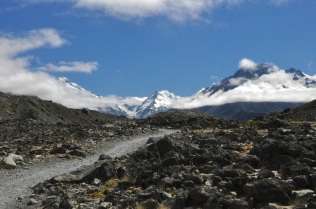 We top a moraine wall and there it is – Tasman Lake, an ominous gray color that we weren’t expecting.  The guide tells us the color is from rock flour, ground up rock particles that haven’t settled out yet.  We’ve seen rivers of gray glacial run-off, but never a whole lake of it!  It definitely adds to the forbidding nature of the landscape.  An interesting side note – the river that flows out of Lake Tasman empties into Lake Pukaki (see previous post); on the way, the water sheds the larger rock particles, leaving smaller ones that scatter light to give Lake Pukaki its other-wordly blue color.  Pretty amazing to give the very long and large Pukaki Lake that color, seemingly throughout.

Tasman lake, virtually opaque and with a temperature just above freezing, is devoid of any life and looks it with its cadaverous grayness, but the surrounding mountains and playful clouds are beautiful.  The last two images below show the back side of Mt Cook and its hanging glaciers.

We’re heading off to the glacier front in a boat just like this one, and we’ve managed to snag the front seat!  There are icebergs on the lake today, but the wind has blown them all back to the glacier end of the lake.  As part of the safety talk, we are instructed to put our hands in the water for about 30 seconds; it very quickly becomes painful, and we can’t wait to pull our hands out.  Take-away lesson:  do not fall in!

As we motor out, we pass a small waterfall coming out of the clouds.  Pretty, but the main attraction is dead ahead.  Impressive!  The glacier fills the valley floor from side to side; it is crowned with a layer of rock debris, but we can’t begin to estimate its height – the mountains around it are too large to give a sense of scale.  We can’t get too close because 1) a calving chunk could send waves that might dump us into that frigid water (the glacier moves forward at a speedy 9 inches a day), and 2) a piece of the underwater shelf that extends up to 200 feet from the glacier could break off, pop to the surface, and flip the boat.  Definitely undesirable but highly unlikely – but them’s the rules.  Still, we get reasonably near, as shown below.

It’s time to look at some icebergs up close.  First we haul out some little ones.

Our guide fishes one out and passes it around.  We spot a bigger one, and she lets Ron fish this one out, with Ginger hanging on to his belt to keep him in the boat.  The ice floating in the lake is about 300 years old – it has taken that long to move down the glacier escalator – and the ice exists as large, inch-sized crystals, which you can begin to see in the last image above.  The crystals were originally formed under high pressure and low temperature, but once free of the glacier and at lower pressure and higher temperature, the crystals grow and air pockets form, causing the ice to appear whiter.  Some examples of iceberg crystals are shown below. 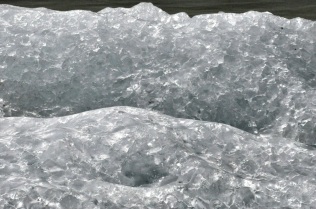 We were tugging on the iceberg in the picture below when it started to roll, causing the guide to beat a hasty retreat, but the iceberg righted itself (darn!).  It did give us a look at some of the underside, which was perhaps closer to original crystal size. 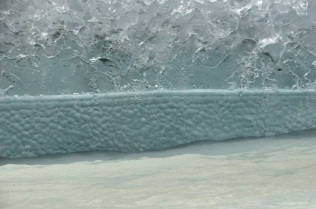 The air bubbles in the ice were also interesting.

Finally, below are pictures of icebergs with their blue hue.

Well, we didn’t see glacier-front calving or shelf flipping, but communing with the icebergs was interesting.  As we hike out to our waiting bus, we notice a nice waterfall on a side mountain that we had missed.  Dime a dozen, eh?

It’s early afternoon, so we decide to do at least part of a hike that we haven’t done (we’ve done most!).  The hike goes down the Hooker Valley to Hooker Lake and, at it’s end, the Hooker Glacier.  More of the same, really, so we won’t go too far.  First, however, another look at the majestic Mt. Cook!  And on the right, the Huddleston Glacier of Mt. Sefton.  Awesome!

The Hooker Valley trail goes up before it goes down; in the first picture we’re looking down on Mueller Lake and the first of several swing bridges that we’ll have to cross.  Pictures from the hike follow.

As we’re hiking out, Ginger comments that the bush on Mt. Wakefield looks a lot like a chess knight.  Yes, it does!

Tomorrow we leave this gorgeous place, but I take a few last shots of the mountains at night, and later, of Lake Pukaki as we depart.  This has definitely been one of the high points of our New Zealand sojourn.