Dunedin is the largest city in the southern half of the South Island, with a population of 120,000 (20% of which are students).  Called the “Edinburgh of the South”, it was founded by Scottish settlers around 1850, who named it after home – DunEDIN(BURGH).  Ten years later gold was discovered nearby, and this port city quickly became NZ’s most important, spurring a building boom that resulted in a legacy of harmonious Gothic Revival architecture fashioned from volcanic bluestone and creamy limestone.  This is a city post – Dunedin’s university, churches, architecture, and art museum.

THE UNIVERSITY OF OTAGO

Dunedin is home to NZ’s first university (1869).  We happen to be here during the University’s Orientation Week, a big mistake!  Classes are not yet in session, and students, newly liberated from parental control, have a lot of time for beer drinking and rowdy behavior. We have unwittingly booked a motel in a student area, our walls are thin, and loud top-of-your-voice street-side “conversations” go on until 3 or 4 in the morning.  Groan!

The University looks very much like an English university to us, although it’s on a considerably smaller scale.  In the pictures below, the darker stone is bluestone.

The details are fun – the carvings, the attractive windows, even downspouts are special.

Every day we walk past this church that is not in our tour books – the Knox Church, it’s called, just a small Presbyterian church – but it is quite beautiful, reflecting the architecture of that time.

The most impressive church in Dunedin is St. Paul’s Cathedral, an Anglican church constructed in the early 1900’s entirely of Oamaru limestone (see post of Jan 20, Oamaru and Penguins).  It’s located on The Octagon, the central plaza of the city, laid out in 1846 and home to a number of well-preserved buildings. 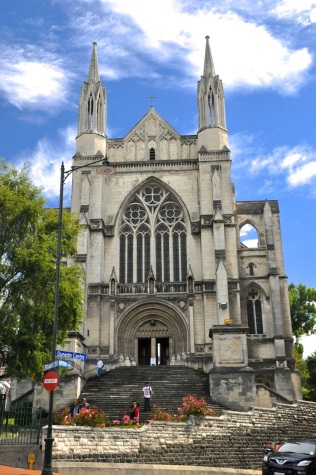 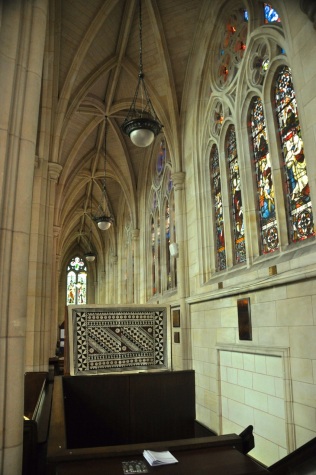 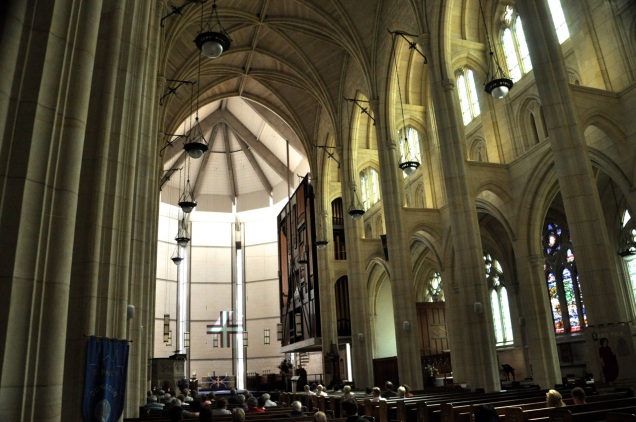 Positively European, eh?  I’m a sucker for stained glass, and this church has a lot of it, all from the early 1900’s.

The final church is the First Church of Otago, touted as the most impressive of NZ’s earlier 19th century churches.  Praise is given to its wooden gabled ceiling and rose window, but we get there late and I am shooed out before I can even take a lo0k – just that quick picture from the door before I’m spotted.  I try to sweet-talk my way in, but it is not to be.  Still, the church is very impressive to look at, even from the outside.

First, let’s look at a grand building there in the Octagon near St. Paul’s Cathedral: the Municipal Chambers, built in the Italian Renaissance style in 1880, also from Oamaru limestone.  The lamp bases aren’t bad either!

Also on the Octagon is the Regent Theatre, home to the Royal NZ Ballet and other shows.  Built in 1874, its interior is a combination of 19th century fashion and 1920’s art deco – a stunning combination, I think; classical and classy!

Another turn-of-the-20th-century building is the Dunedin Railway Station, again built of bluestone and Oamaru limestone.  I think it’s fabulous.  Ginger is not so sure. 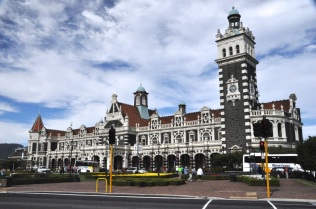 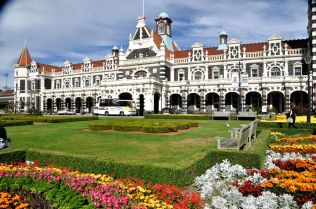 C’mon, isn’t this the most resplendent train station you’ve ever seen?  The interior is also quite amazing, with a foyer of tile and a porcelain mosaic floor.

Some of the residential homes downtown are reminiscent of New Orleans buildings of the same period – maybe it’s all that wrought iron (but definitely not the turret). 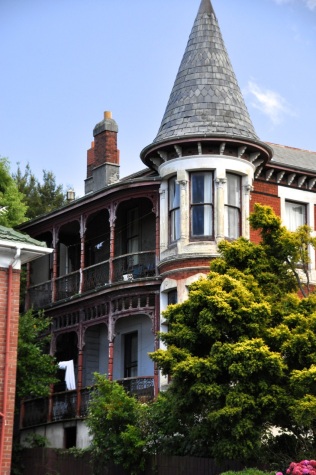 Below are samples of downtown business buildings.

Finally, I wanted to share our experience visiting a cafe downtown.  We saw people shooting up, with big syringes, right there at tables out front, in broad daylight!  So, of course, we had to try it too.  Or at least Ginger had to, that junky in need of a (sugar) high.  You order, select from a variety of fillings, take a seat, and soon appears a warm, sugar-coated doughnut (shell) and a large syringe filled with jelly, lemon, chocolate…, whatever your “fix”.  Just to keep it low calorie, it comes with a side of whipped cream, too.  Messy, yummy, the ultimate do-it-yourself rush.  It is an interesting take on the jelly doughnut. 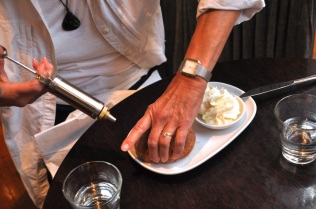 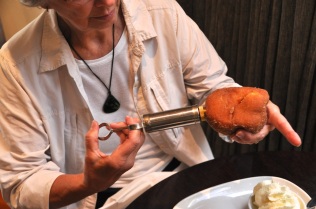 It’s the oldest gallery  in NZ, converted from 6 Victorian buildings into a very modern, gleaming museum, right on The Octagon.  The foyer has a work entitled “Cones” by NZ sculptor 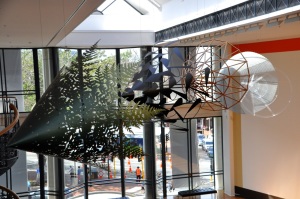 Neil Dawson (his work also appears in our posts from Christchurch and Wellington, but unacknowledged).  Also note the cool spiral staircase barely visible on the left, from Victorian times. The museum has a traveling interactive exhibit of works by Seung Yul Oh that was fun; certainly Ginger got into it!  The pictures below show some of the art from this exhibition. 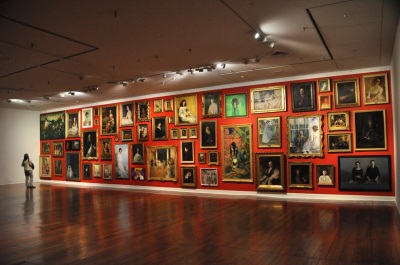 The core museum starts with an interesting introduction, “Wonderwall”, an entire wall of some great art!  This is the “salon style” of art display from the 1600’s.  The large room is otherwise empty, except for a full-size replica of the amazing “The Wrestlers” from 3rd century BC Greece.  The austere room and 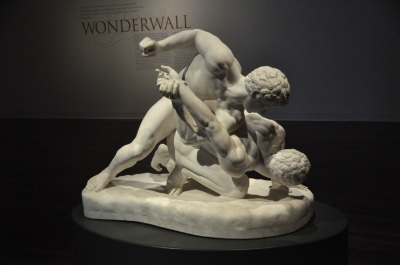 fabulous art is striking, and intriguing.  One of the ideas behind this type of presentation is to invite comparisons.  I note that many of these paintings show people looking out at me, looking in at them.  Ooooookay.  A little different.  In looking at art, I’m used to mentally putting myself in the picture.  Here I seem to be the picture, the gallery looking at me!  Turnabout!  Here are some pictures I like, up close.

The picture below is a fascinating “out there” piece of art created by Anne Ferran, an Australian artist, during a two-month artist-in-residence program at the museum.  From 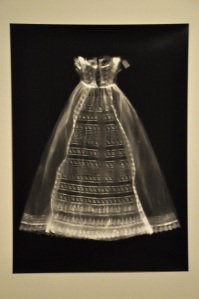 across the room, it looked like a ghostly 3-D construction or a hologram.  Up close, it’s a ghostly picture of an infant’s christening gown.  It’s called a “photogram”; I suspect it’s done with x-rays using x-ray film.

OK,  on to some other art that impressed me.  Another “out there” fascinating collection by an American, Robert Rauschenberg, worked with unusual juxtapositions/allusions in color lithography, examples below. 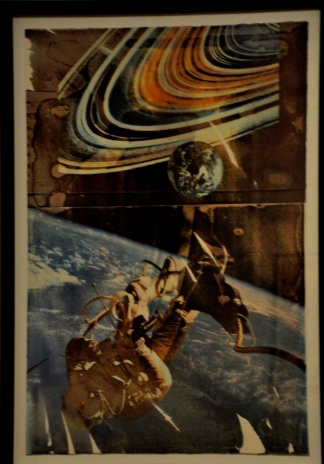 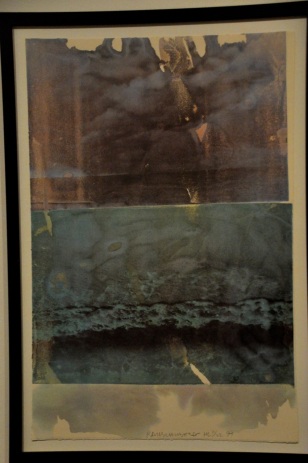 I was blown away by the works of Frances Hodgkins.  Working in watercolor at the end of Impressionism/ beginning of Modernism, she captured the optical effects of light on water, along with movement and stillness, that I find incredibly beautiful.  Examples below.

Finally, let me show you some amazing linocuts (a woodblock-like process, but using linoleum) from the 1930’s.  Each color required one block , necessitating simple, abstract designs.  Yet this very simple, static process produced such a sense of speed and movement!  Printing was done by hand – a piece of paper was placed on the inked tile and rubbed – thus producing very affordable art for this industrial age.  The prints are grouped by artist.

That’s probably enough for one post!  The next and last post on Dunedin will showcase the fabulous Chinese Scholar’s Garden and the fascinating Polynesian exhibit at the Otago Museum.