Welcome to the UK!  Following our New Zealand adventures, we’re starting off our UK exploration in Leeds, England.  Why Leeds, you ask?   Ah, yeah.  Good question!  The adventurous life can have interesting twists.  We signed up to do a house-sitting there, but the house turned out to be a filthy, unlivable disaster!  We barely dodged that bullet.  I won’t bore you with the story, it all worked out, but lesson learned: get lots of pictures before committing!

So here we are in Leeds, which is apparently NOT a city that attracts a lot of tourists  – we were continually asked “Why are you here?” by locals.  Yes, Leeds is overshadowed by nearby York (we’ll get to York in a future post!), but we found the Victorian architecture wonderful; the Royal Armory (moved from London) surprisingly captivating; and a visit to the nearby manor Harewood (still home to an Earl and Countess) fascinating, with its insight into the jaw-dropping (and shocking!) display of aristocratic wealth from the late 1700’s to the present.  It’s too much to cover in one post, so I’ll start just with the city itself.

Let’s begin by looking at some buildings!  These pictures will give you a very small taste of the marvelous Victorian architecture here.

That last picture is of Whitelocks, the oldest bar in Leeds (licensed in 1715, rebuilt in the 1880’s and extended into the row of Georgian working men’s cottages).  Surely I can’t describe an English city without showing you an English pub, right?  It’s delightful, with stained glass windows and a copper-topped bar.  The beer isn’t bad , either!

Back to our buildings:  the exterior detail (on both new and old buildings) is impressive (see below).  Lots of flourishes!

The Corn Exchange is an amazing building, built in the 1860’s as a clearing house for the sale of grains in England and Scotland.  It had 170 trading stands and continued strongly into the 1950’s.  Of note is the amazing design of the roof that allowed uniform (northern) light for the careful inspection of the grains.  Today it contains specialty retail stores.

Although lacking in historical impact, Leeds leads in shopping – apparently second only to London.  The shops are indeed impressive, both Victorian and modern.  The Victorian arcades are especially captivating, as shown below.

The modern arcade is impressive as well. 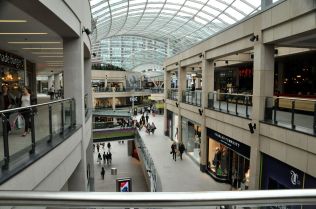 In the Victoria Gate Arcade there were two huge window displays of antique sewing machines that we found very interesting.  Fancy decoration! 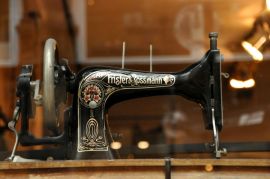 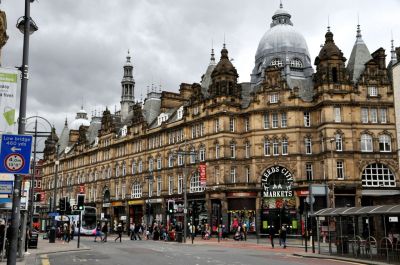 The city market is located in a very impressive building with an equally impressive interior; the food displays are a riot of color, combined with jostling but polite people and barkers hawking their wares.  I was particularly caught by the seafood on display.  The images below are just a peek.

The Leeds Art Gallery was a disappointment, the art collection being surprisingly small.  I was impressed with an artist I had never heard of, Christopher Nevinson, a “Futurist” painting during World War I; examples below. 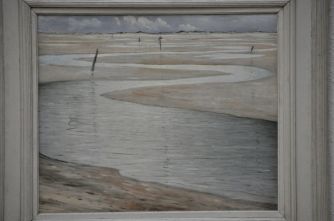 Another gem was this engraving, but alas, I missed the artist.

The real art in the art gallery was its coffee shop, an incredible room of tile and decoration,  shown below.  Around the room, high up, were busts of famous authors of the UK (Burns, Scott, etc.) and others more ancient (Homer, Dante).

Finally, a visit to Leeds Minster (Cathedral).  As English churches go, the Leeds Minster is tiny and relatively new (a church has been here since before the 11th century, but several previous versions were destroyed by fire; this one was built in the 1840’s).  Still, it is a very attractive church, with some preserved items from its past.  The baptismal shown here is from the 1400’s (used until 1883).  Earlier yet is the Leeds cross, dating to the 900’s.  It was found built into the previous medieval church structure when the new church was begun.  The cross would originally have stood outside the church, together with other crosses, likely as grave markers.  The carvings juxtapose Christian and pagan 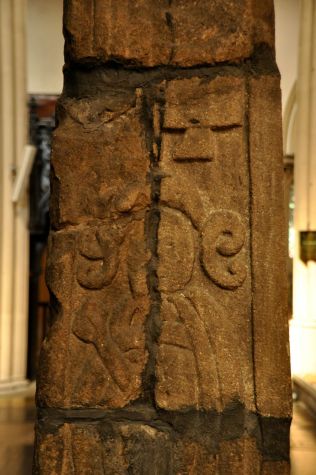 Pictures of the church:

Pictures of the stained glass:

That’s it for the city of Leeds itself.  OK, it’s not a tourist destination, but for us that was part of its attraction; it’s a normal UK city, attractively going about its daily life, yet for us newcomers to the UK, impressive in its old roots.