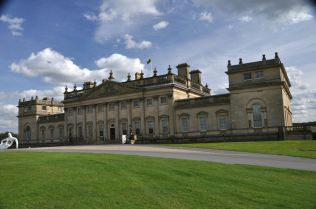 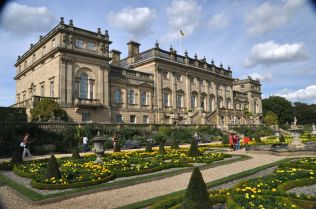 Georgian architecture.  The Earl Edwin Lascelles wanted nothing but the best and employed the finest craftsmen of the time: architect John Carr, interior designer Robert Adam, furniture maker Thomas Chippendale, and visionary landscape gardener Lancelot ‘Capability’ Brown.  That backyard, shown below?  No, not that simple patio garden in the foreground, silly, we mean

the trees and lakes going off into the distance in all directions – that’s all Brown’s landscaping and tree planting, making it look manicured but natural, just so.  With regard to expenses: “Let us do everything properly and well ….”  The place defines filthy rich, with Renaissance masterpieces, exquisite family portraits by artists like Reynolds and Gainsborough, an enormous collection of Sèvres china – a lot of it previously owned by Kings Louis XV and XVI (and some ordered by Louis XVI but not delivered due to a decapitation problem), etc etc.

Today Harewood is one of England’s “Treasure Houses”, a consortium of 9 of the foremost stately homes in England still in private ownership that market and promote themselves as tourist venues.  The Lascelles – Earl and Countess of Harewood – still live there, but since the place is beyond huge, we’re sure they don’t miss the area accessible to the public – although even that area becomes available to them after hours and in the winter.  So let’s take a peek at the life of the English aristocratic rich ….

We’re starting with the OMG ceilings, each room different, each designed by Robert Adam, with a rug designed to complement it.  Of course the wallpaper and rugs have been restored now to reflect what it would have been; the fireplaces are original and the ceilings have their original plaster work (though it has been repainted).  It’s impossible to really get an entire room in a photo and still see the incredible detail, as illustrated in the picture to the left, so we’ll just show some of the ceilings.  We think you’ll agree, they’re pretty incredible.  Of course you need to add the full-room floor rug with a pattern that’s riffing off the ceiling design to get the full effect.

Apparently if one has a lot of money, there’s nothing to do but collect expensive things, and then show them off (flaunt?); so there are a lot of collections on display, such as ladies fans (from the days before air-conditioning).  There were lots of fans (!), so we’ll just show a few that impressed us.

We’ll start our tour of Harewood with Edwin Lascelles’ bedroom.  The bed is from

Chippendale.  Ah, to avoid repeating “from Chippendale”, let us note that every piece of furniture in the house was designed and made by Chippendale!  The Chinese wallpaper, from the 1760’s, is spectacular.  It’s the original; out of favor in the early 1800’s, it was cut from the walls and stored away – for 200 years, and nearly perfectly preserved.  Hand-painted on fabric made from mulberry bark, it’s a continuous landscape of traditional Chinese rural life.

Next is Lord Harewell’s Sitting Room.  Every room has a unique fireplace, and above that, usually a large mirror slightly tilted so that it reflects the fabulous ceiling.  This room has some line drawings of unclad females, but also has some pretty fabulous paintings – like J.M.W. Turner (1789) – who painted the Harewood mansion (!), Thomas Girtin (1801 – you probably don’t know him [we didn’t]; he outshone his friend Turner and played a key role in establishing watercolor as a reputable art form, but he died young), and two paintings by John Singer Sargent (1905, 1913).

The State Bedroom was reserved for visiting royalty or heads of state, such as the Grand Duke Nicholas of Russia (1816) and the future Queen Victoria (1835) – ie., it was

used infrequently.  The bed and furniture are Chippendale, of course – and they’re spectacular.

Next is the Main Library, a Victorian room with imposing mahogany bookcases with brass inlay and marble chair rail.

Then the Yellow Drawing Room – not too shabby.  The porcelain throughout the house is astounding. 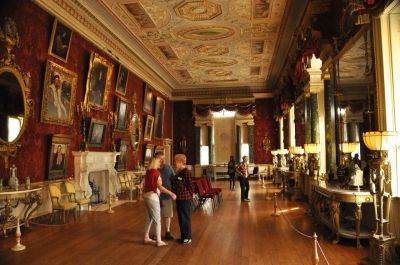 The Cinnamon Drawing Room is enormously long and houses a lot of collected treasure.  Edwin Lascelles – and his son after him – had an eye for beautiful objects and a bank account to support expensive tastes.  Maybe you noticed the Chinese pottery in nearly every room shown so far – like the Ming vases in the Main Library above.  How about these next gems?  The first vase below (French, 1740-1760), has a Chinese celadon glaze, a dolphin body, a ram’s head below the spout, and serpent handles.

The other celadon-glazed vase is also French (1774-1795) and is thought to have come from the Palace of Versailles.  And the paintings?  We’re talking private collection here –

how about having on your wall a Bellini, or Filippino Lippi, or Titian, or El Greco, or Jusepe de Ribera?  Finally – for this room – the china.  How boring, you say?  Well, a short history lesson is needed!  When Louis XV moved the government and court to the Palace at Versailles, it became the center of society, art and fashion.  The King (and his mistresses Madames de Pompadour and du Barry) commissioned the greatest artists and craftsmen of the day; in particular, their patronage of Sèvres porcelain was key to that factory’s success.  After the fall of the Bastille, the new government confiscated and sold the art, and France’s finest made its way to the wealthiest families in Europe.  In England in the early 1800’s, French style and culture was the fashion, and Sèvres porcelain was one of the more prized

possessions.  Here at Harewood, there is an entire hall of this porcelain in display cases, so many different place settings that one gets tired looking at it.  That’s in addition to a room where some of the best is displayed, and where looking is much less tiresome!  Here are some examples – and some from the table of Louis XVI and Marie Antoinette, delivered a year before their executions.  They are spectacular.

Just because I thought it was gorgeous, here are pictures of a cabinet from that room. 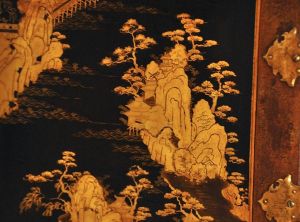 OK, we’re nearing the end of the display of conspicuous consumption.  Just a few more rooms to look at.  This is the State Dining Room.  It still has the original furniture, but everything else, including the stone fireplace, was remodeled in the 1840s.  Of course the dinnerware is still (yet more) Sèvres porcelain.  The portraits on the wall are the various Earls and Countesses of Harewood.  The fireplace (below), is pretty spectacular, with its head of Bacchus (god of food and wine).  The

Chippendale furniture is remarkable; the (urn-topped) pedestal conceals racks to keep plates warm; the urn itself is lead-lined, to be filled with ice to keep beverages cold.  That oval “cellaret” beneath the (superb) side-table?  That’s a lead-lined wine cooler for use during the meal. 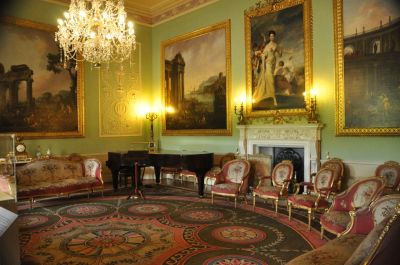 Finally, the Music Room.  It’s pretty much unchanged since 1771.  The Chippendale inlay on the furniture (shown below) is amazing.  The vase, Sèvres of course, is from 1770.

I guess I have mixed reactions to this incredible extravagance on display.  Look simply at that Chippendale inlay above.  Every piece of furniture in the house is like that.  Really?  Every piece?  When is enough enough?  Is “Because I can” a sufficient justification for doing?  Primarily I am repulsed by the need to own 1,000 pieces of Sèvres porcelain dinnerware and the total output of the Chippendale factory for several years.  On the other hand, would these beautiful items be here for us to see if not for the extravagance of the rich?  Haven’t the arts almost always relied on rich supporters?  I remain ambivalently repulsed.

Then again, out of curiosity I queried the internet on how the Earl Edwin Lascelles made this incredible fortune that his heirs continue to enjoy to this day.  Funny, the Visitor Guides and brochures don’t say a word about that.  The Earl made his fortune in 3 areas: in “Customs positions” (I don’t know about the Earl, but historically being in charge of who pays how much in customs down there at the docks was a very rewarding profession); in money lending; and in the slave trade.  Yeah.  That unearthed info makes me see the lavish display of wealth (and aristocratic power) in an even less sympathetic light.  Methinks scruples and wealth frequently have an inverse relationship; the pillars of capitalism do not rest on a moral foundation.  I confess I have great admiration for Bill Gates, however he has decorated his house – he seems to be trying to do good.  For most of the 1% – couldn’t you get by on maybe just 500 pieces of Sèvres porcelain?

I offer a small apology regarding these ruminations over wealth.  Wealth does divide us.  I must say I’m content with my middle-class life.  Yet somewhere in my head there is a notion, right or wrong, that great wealth also comes with greater responsibilities; there is a greater chance for impact.  When the incredible wealth of a place like Harewood slaps you in the face with its extravagance, it’s hard not to see it as, sadly, simple narcissism and lost opportunity.

Next post – the incredible city of York (and no philosophical meanderings).

2 comments on “Harewood mansion, near Leeds”