For our last outing we take a boat from Doolin to one of the Aran islands, Inisheer.  Hey, I didn’t realize the Cliffs of Moher were visible from the Doolin harbor!  Cool.

Inisheer is the smallest but closest of the Aran Islands.  Inishmore, the bigger, more touristy Aran island, has the blockbuster sights, such as a 2,000-year-0ld Iron Age stone fort perched on the edge of a cliff, but it’s a lot further away.  Inisheer has its own interesting sights.  All of these islands are harsh, steep, rugged, rocky and windswept by severe gales –

like the Blasket Islands, only these are still inhabited.  The gritty population lives off a mean sea and a land with less than 6 inches of topsoil.  Little of the land can be farmed.  The soil that exists was mostly created by the islanders themselves, the results of centuries of layering gathered seaweed (the brown stuff in the picture) with limestone sand and animal dung.

What we see as we approach Inisheer is the incredible number of stone fences that apparently needed to be built to clear the land.  It’s a staggering amount of stone!  As we dock we are greeted by a lone dolphin, happy to see us!

Inisheer island looks a lot like the karst landscape of The Burren, with criss-crossed grikes everywhere, often with flowers sprouting from the cracks.  Clearing this stuff must have been incredibly hard.

The many stone walls on the Aran Islands are often built in a unique style, I think due to the small plots that they enclose.  In this “Aran ‘gap’ style”, the walls periodically 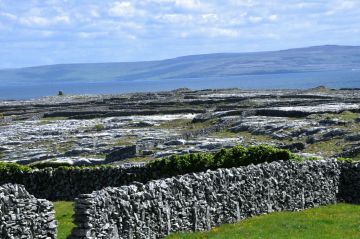 include tall upright stones, the spaces between them filled with smaller stones.  This construction allows a farmer who wants to move livestock to dismantle a short section of wall as a temporary gate, and then easily rebuild it.  It also allows the winter gale winds to blow through the gaps in the wall, rather than blow the wall over.

One of the sights on Inisheer is the An Plassy, a freighter that wrecked offshore in 1960 (the crew was rescued with the help of the islanders) and was then washed ashore in a

There is “old stuff”  in Inisheer as well, the oldest being the ruins of St. Caomhan’s, a church that was nearly buried by drifting sand dunes.  From the grass-stabilized top of the sand dune (now a cemetery), you can see that only the very tip of the roof would have been visible before excavation.  Little is known of St. Caomhan, the patron saint of Inisheer, 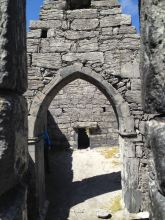 who lived in the 500’s.  The church was built in the 900’s, and a century later the nave was widened.  The crude construction is pretty cool.  The alter, at the other end of the church, 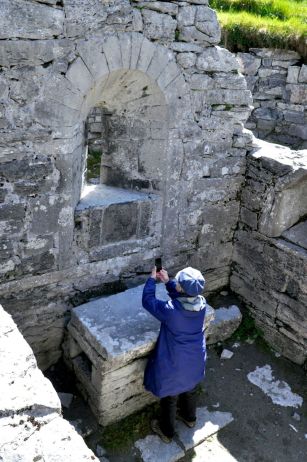 has a carved stone above it.  Nearby is the reputed gravesite of St. Caomhan.  Local folklore claims that if you spend the night sleeping on the tomb, your particular illness will be cured (my guess is that sleeping there would be sufficiently uncomfortable that afterwards other parts hurt worse).

A final point of interest is O’Brien’s Castle, the ruins of which dominate the hilltop and are visible from most of the island.  This small castle was built as a tower house refuge around 1400 by the O’Brien clan whom we’ve met before (“Southwest Ireland Tour II – Mizen Head and Killarney National Park“, July 8, 2015).  The castle sits inside the low

wall of a much older Iron Age ring fort.  The (hated) Cromwell’s army attacked the castle

This hilltop is an excellent vantage point to view the island and see the incredible number of stone walls that surround the small plots of land; it was obviously easier to build walls 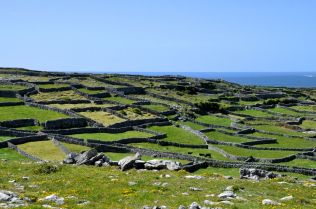 with the stones than carry those suckers down to the beach.

On the way back to Doolin we get an up-close view of the Cliffs of Moher from the sea. 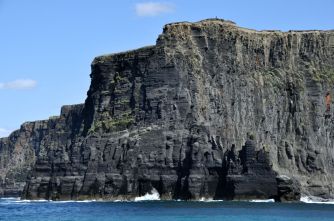 Even better, we get a good look at some nesting sea birds — kittiwakes, razorbillls, guillemots and puffins.  Puffins!  How cool is that!  First, take a look at one of the nesting

sites on this chunk of rock.  It’s a high-rise bird condo!  Each type of bird seems to roost with its own kind (birds of a feather!) but they also have very close neighbors of other 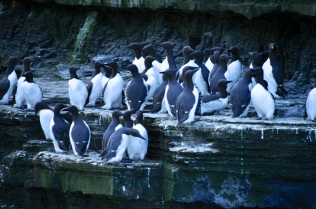 species, as shown in the right figure where kittiwake gulls (on nests) are the upstairs neighbors of the guillemots.  Note that all these birds are nesting!  The guillemots only come to land to breed, and, unlike the kittiwake, make no nest; their single egg is incubated on the bare rock ledge.  Also note the two darker birds in that right picture above; those are razorbills, a species related to guillemots but with a very different beak.   They also only come ashore to breed.  The bird condo houses some species of birds that 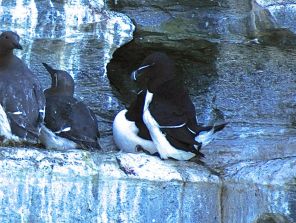 I can’t identify – the picture above, on the right, shows two unidentified black birds defending their nest.

The highlight, though, was getting to see puffins!  They were a minority of the bird population, and hard to photograph, but there were quite a few of them in the water, 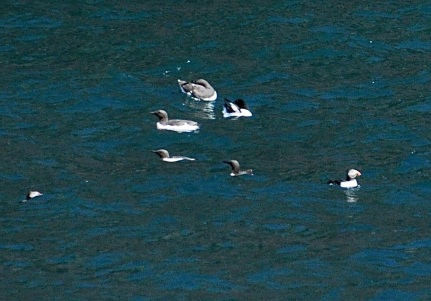 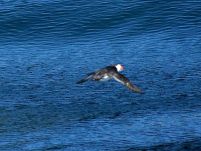 hunting for dinner with the other birds.  Beautiful!  Ah – that last picture, from the internet, is just to show you how spectacular they really are.

And so the Ireland/music tour winds down.  I’d like to share one last set of pictures with you, of Irish crosses mostly from Skibbereen and Inishmore.   The Irish cross is beautiful, full of Celtic artwork.

Our last professional music event featured a young and gorgeous lady named Tara Howley.  She blew us away with her awesome multiple talents on the concertina, fiddle 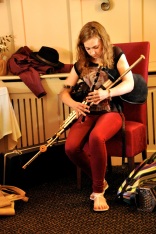 and Irish pipes (!!); she also sang ballads with the voice of an angel.

Our very last music event was definitely not professional; after Tara finished playing, the group gathered and each of us had a chance to perform if we so wished.  Of particular note was the penny whistle concert; Jackie Manning of Small Potatoes had taught a bunch of us to play this simple instrument – which is not so simple!!  If any finger does not completely cover its hole on the penny whistle, the instrument squeaks loudly.  So you can imagine how our plucky ladies sounded, with very little time to practice.  Also of note was Len’s 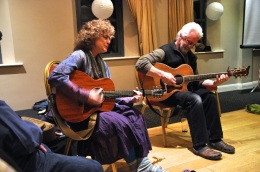 songwriting skill.  Len, along with several others in our group, had suffered through a debilitating stomach bug early in the tour.  His song, “There was a salad in (name of restaurant)”, sung to the tune of “House of the Rising Sun”, was a show stopper.  And of course the Small Potatoes performed, also a great treat!

Thus ends the great South West Ireland Tour with the Small Potatoes.  We saw many 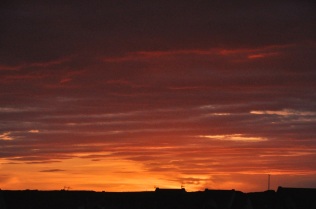 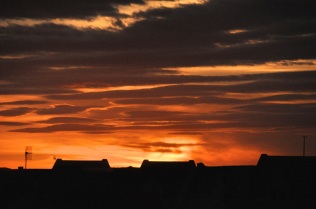 sights, heard great traditional Irish music, drank good beer (Murphy’s was best!) and Irish whiskey (the more expensive it is, the better it really does taste!), had a good time, and met 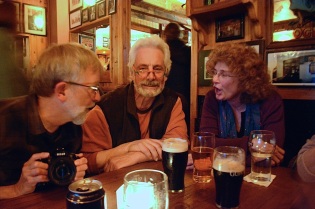 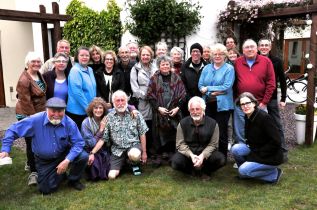 some wonderful people who were soooooooo knowledgeable about music.  The picture on the right shows us all, on the last day before leaving.

As noted in the first post of our Ireland tour, we’re out of sync with our travels.  We interrupted our posts about our travels in bonny Scotland to write and share this section on Ireland with our new-found tour friends.  The next post will cover our last two days in Ireland.  We visited Bunratty Castle and Limerick with two good friends from Ohio who went on the Ireland tour with us.  After that we’ll pick up where we left off in beautiful Scotland.