We’ll finish with Glasgow by showcasing the really old.  The Glasgow Cathedral and nearby Provand’s Lordship are among the very few surviving buildings from Glasgow’s medieval period.  The Cathedral is the oldest building; Provand’s Lordship is the oldest house.  And the Antonine Wall?  Never heard of it?  We hadn’t either; it was the real northernmost wall (at least for awhile) that separated Roman Britain from those pesky Scots.

The Glasgow Cathedral is a superb example of Scottish Gothic architecture, and the most complete medieval cathedral on the Scottish mainland.  The first picture below shows the Cathedral as it looked in 1820 (from a watercolor, “The Saving of the Cathedral”); the following picture shows how it looks today (the front towers seen in the watercolor were 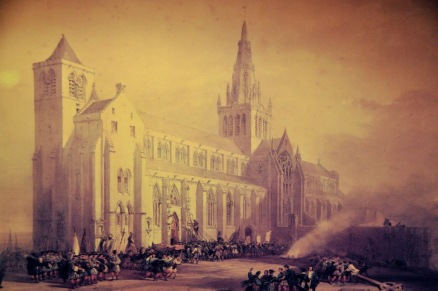 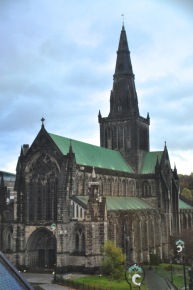 demolished in 1840 as part of a grand restoration scheme that was never completed).

The history of the Cathedral begins with the construction of a small wooden church around 550 AD when St. Mungo started a religious community.  That structure was replaced by a stone church which was subsequently badly damaged by fire in 1136.  The walls of the nave in today’s church, up to the windows, are from the rebuilding that took place in the early 1200’s; the rest of the Cathedral was built in the mid 1200’s.  The Cathedral survived the Protestant Reformation relatively unscathed (as depicted in the first picture) not because the reforming mobs of 1560 were less zealous in Glasgow but because the organized trades of the city took up arms to protect it, the defenders outnumbering the attackers.  The title “cathedral” is now historic, dating from the period before the Scottish Reformation.

The cathedral interior is impressive, with a roof made mostly of wood.

Below are more views of the interior.

The many ceiling bosses of carved wood are all different, beautifully done, and colorful (and difficult to get in focus), as shown below.

There are lots of interesting carvings in nooks and crannies throughout the cathedral (see below).

beautiful in a very different way than the soaring upper Cathedral.  The stone bosses are also pretty cool, each one different.

Finally, there’s the beautiful Blackadder Aisle, built around 1500 on the site of  St Mungo’s original church and designed to be part of a transept that was never completed (it’s hard to tell from the introductory pictures, but the cathedral has no true transepts).  The beautiful, 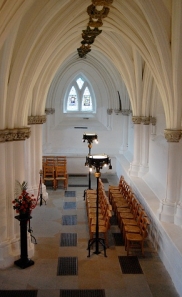 This house, the oldest in Glasgow, was built by (and near) the Glasgow Cathedral in 1471.  It likely reflects “the lifestyles of the rich and famous” for that time.  It was originally the home of one of the 32 canons who managed a part of the Cathedral’s vast diocese – in this case the land at Provan (the other 31 canons were similarly housed).  By the 1600’s it had become a private home; by the 1700’s, and for the next 200 years, it was used as an inn, with rooms on the upper floors and a wide range of shops on the ground floor.  A small extension housed the city’s hangman.  It’s a pretty cool place, all stone with massive, rough-hewn, low-hanging beams and fireplaces everywhere.  The entrance opens into the

kitchen – where it’s very obvious that cooking was not a big production!  And of course a 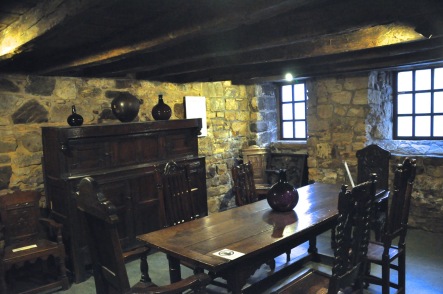 dining room.  The rooms upstairs are old-time, rustic gorgeous.  The room shown below belonged to a canon from 1501 – 1513; he was both a priest and a lawyer.  The room would have served as a living room, bedroom and office. 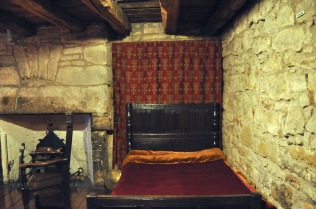 Other rooms are shown below. 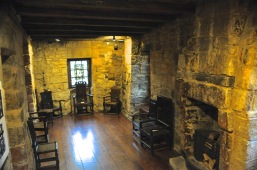 Provand’s Lordship houses one of Scotland’s best collections of furniture from the 1600’s. The chairs below are examples.

Provand’s Lordship also had medieval stained glass windows (now obtained from elsewhere).  The windows below were from England in the 1600’s and commemorate marriages between notable families. 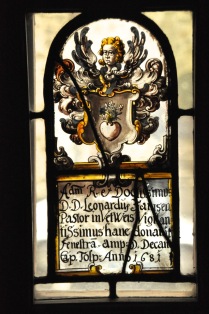 The window below shows 3 saints: St. Nicholas, St. Paul and St. Peter.  It was made in the Netherlands in the 1500’s; the trefoil and 2 quarterfoil panels at the top are from England, made in the 1300’s.

What?  Never heard of it?  Interesting how history does that to us.  Yet you’ve heard of Hadrian’s Wall, right?  That northern-most demarcation of Rome keeping those pesky Scots at bay?  Actually, that northern-most border was the Antonine Wall.

We discovered the little-publicized Antonine Wall when we visited a museum at the University of Glasgow; it’s a gorgeous university, as shown below.

Just for review, as noted in our Hadrian’s Wall post (Hadrian’s Wall), that wall was built in 122 AD; it was 73 miles long, went from coast to coast, and was built 15 – 20 feet tall from quarried stone (in the middle of nowhere), with 80 stone forts along its length.  Probably as a result of continued attacks from

the unconquered north, in AD 142 Hadrian’s successor Emperor Antoninus Pius ordered a new wall built about 70 miles further north of the existing wall.  Again these clever Romans somehow knew where the shortest distance would be, and the wall was built from the river Clyde just above present-day Glasgow to the Firth of Forth just west of present-day Edinburgh.  The wall was 39 miles long, about 13 feet high, and 16 feet wide; it took 12 years to complete.  It was built of turf and earth on a stone foundation.  Like Hadrian’s Wall it had a deep ditch on the north side and a military road on the south.  A wooden palisade is thought to have been on top.  It was protected by 17 forts with about 10

“fortlets”, very likely on (Roman) mile spacings.  In spite of the effort it took to build the wall, it was abandoned only 8 years after completion (162 AD), the garrisons being relocated back to Hadrian’s Wall.  Following a series of attacks in 197 AD, the emperor Septimius Severus arrived in Scotland in 208 to secure the frontier.  He ordered repairs and re-established legions at Antonine’s Wall (after which the wall also became known as the Severan Wall).  Only a few years later the wall was  abandoned for the second time and never fortified again.

Apparently the ruins are not much to see; the turf and wood wall have largely weathered away.  Still, the various legions that built the wall commemorated their finished construction and their victorious struggles with the natives (called the Caledonians) in decorative local limestone slabs, called “Distance Slabs”.  The slabs were set into stone frames along the length of the wall.  Dedicated to the Emperor Antoninus Pius, they identify the legion, the length of the wall they built, and with symbolic imagery they depict the might of the Roman army and the native population in defeat.  In the largest known slab (shown below), the inscription reads: “For the Emperor Caesar Titus Aelius Hadrianus Antoninus Augustus Pius, Father of his Country, the Second Augustan Legion built this over a distance of 4652 paces.”

Other examples are shown below.

A number of stone statuary items from the bath houses and fort buildings attest to the Romans’ love of art even at their furthest outposts. 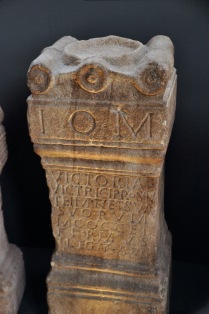 Other artifacts like coins and leather shoes were of course also plentiful.

That’s enough on Glasgow!  Next post is a change of pace, on England’s Lake District.