To start, let me review Gaudí’s unique architectural designs that we mentioned in the last post (Barcelona X).  Gaudí incorporated many geometrical forms in his designs, particularly hyperbolas (more accurately, their 3-D rotation that forms hyperboloids, illustrated in pictures below).  Hyperboloids like that shown in the last picture below

essentially form the Sagrada’s ceiling.  In addition, for Gaudí, religion and nature – God’s creations – were intertwined, and he used a number of nature’s designs in his own architectural solutions.  For instance, in nature, the cellular elements in the trunks of trees are often joined together and oriented not linearly but spiraling upward, giving the trunk and branches greater strength.  Gaudí uniquely took this approach, allowing his very tall columns to be more slender and producing a more harmonious effect.  Besides his columns branching tree-like to support their load, the column surfaces are the result of intersections of oppositely turning geometric forms.  The simplest example is that of a

square base twisting clockwise and a similar one twisting counter-clockwise, evolving into an octagon as the column rises, then a sixteen-sided form, and eventually to a circle. Depending on the position of the column in the basilica and the weight load, the columns start with different geometrical cross sections; the taller the column, the more points in the polygon at the base.  The tree-like columns, as well as having a structural function, reflect Gaudí’s idea that the inside of the temple should be like a heaven-reaching forest that invites prayer.

With that preparation, let me introduce you to the interior.  To the left is the floor plan of the Sagrada Família with the Nativity entrance on the right side.  Following my visit to the Sagrada interior, I was very much surprised by this floor plan.  Usually medieval cathedrals are cross-shaped with long and narrow naves and transepts.  The Sagrada also incorporates a cross shape, but it looks positively short and squat, with truncated nave.  The dwarf cathedral!  However, inside the Sagrada, Gaudí’s “forest of columns” absolutely hides that wide and short nave; the columns define a long and narrow space very much like the Medieval cathedral.  Besides, as you’ll see, with everything else that’s happening, the nave’s length is the last thing that’ll capture your attention!

Well, one last observation before we go inside.  When I look at the Sagrada Família, what I mostly see is this huge towering stone structure, and secondarily a bunch of small decorating windows, as shown in the first two pictures below.  However, a  closer 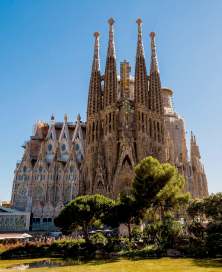 inspection suggests there are in fact a fair number of those small windows – and many more windows to which we previously paid no attention, such as those we saw in the previous Barcelona X post lurking behind the statues of Christ crowning Mary in the Nativity facade, or those hiding in plain sight behind the singing angels, shown below. 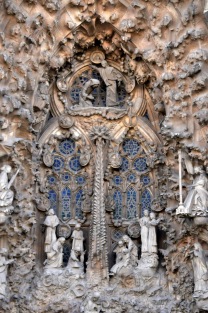 So the Sagrada Família has more windows than you might think!  And you’ll see that in the interior.

Entering from the Nativity entrance, across the transept is the Passion facade entrance. 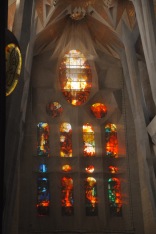 Isn’t that first picture awesome?  We’ll come back to those gorgeous branching columns; for now we’ll look overhead at the ceiling vaults over the transept, shown below.

That is a ceiling!  There are no straight lines, just smooth curves and jagged incised arms of intersecting hyperboloids.  The complex structure is somehow magically supported by the branching columns.  The pictures below continue the scan across the transept, looking 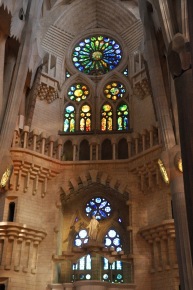 Turning to the left we face the choir, which soars upward, the leaning columns adding

perspective to the heavenly stretch.  Isn’t that first picture impressive??!

And now the nave.  Oh yeah.  If you remember from the floor plan, there is a central column-lined aisle bounded on each side by another column-lined aisle.  The central aisle is higher.  Below are two  pictures from the internet, the first taken from the rear of the nave looking toward the choir.  The wide-angle lens used in that first picture skews the 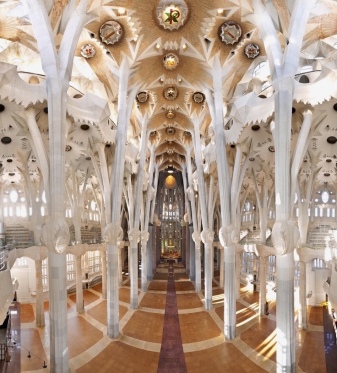 perspective on the right and left sides, but this picture does illustrate Gaudí’s “forest of columns”.  It’s a gorgeous interior!  The 2nd picture shows the incredible ceiling over the nave.  It’s stunning!  The hyperboloids on the left and right sides presumably represent the leafy canopy of the column “trees”.  Some see those hyperboloids as representing stylized sunflowers, a flower Gaudí loved and incorporated in a number of his architectural projects (in a subsequent post we’ll show you a Gaudí house that is sunflowers from one end to the other!).  Whatever those hyperboloids represent, the ceiling is just awesomely beautiful!

As exciting as those pictures of the nave are, they don’t capture it’s magic.  Did you notice the colors in the ceiling in that last picture above?  The ceilings in those side aisles are lower than that of the main aisle, and that color comes from light reflected upwards after passing through the lower stained glass windows.  Just a reflection?  What does that portend for direct viewing?  Let me show you the view you get looking down the first nave side aisle when entering from the Nativity entrance, first 2 pictures below.  The color that 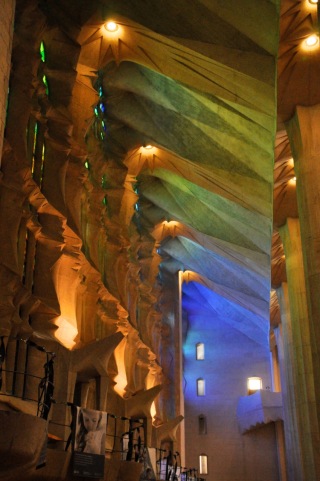 is streaming in is stunning!  It’s natural lighting delivered by the nave’s lower stained glass windows, as illustrated by that last picture above.  Not to be outdone, the other (Passion) side aisle continues the color spectrum, green to red, as shown below.  It’s

breath-taking.  Wandering down the aisles is like being in a jewel box or a light show, as shown below.

The nave aisle windows causing this light show are shown in more detail below, first for the red side.  There are two levels of windows, as shown in the first picture.

Those last two windows you saw from the outside (at night) in the previous post, Barcelona X.  The nave windows on the blue side are shown below.

The windows with their patterns and colors are stunningly beautiful.  Gaudí planned for the graduated spectral tones of light inside the Sagrada Família to create an atmosphere conducive for introspection.  For me, it wasn’t introspection that I experienced but awe – and a child-like wonder at being transported to a fairy world.

Below is another look at the beautiful hyperboloid ceiling in the nave aisle, with its tree-like columns and flower/leaf canopy.  In keeping with Gaudí’s design of columns as trees, the bulge that supports the branching columns alludes to stubs from cut limbs.

The ceiling in the central aisle of the nave is higher and has a very different hyperboloid design.  It’s also much brighter.  How so?  Unlike the lower stained glass windows, the

upper windows use uncolored glass, as shown above, providing more light to the higher-ceiling “heavens”.  Below are views of this upper ceiling; the hyperboloids are gorgeous. 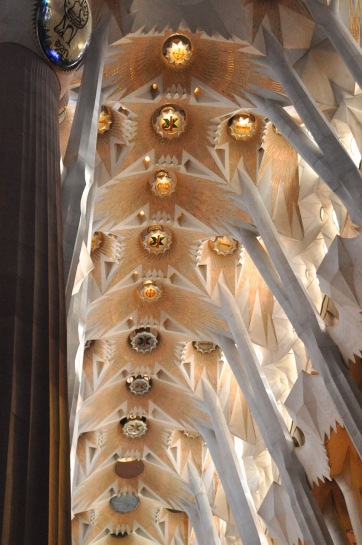 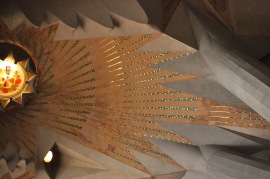 Notice the presence of small lights in the ceiling, looking like light bulbs.  They’re not.  To both lessen the load of the ceiling and bring yet more light into the building, Gaudí designed skylights in the roof (again based on hyperboloids).  He also added linear elements of gold and green glass and tiles to reflect the daylight inside.  It all adds up to spectacular.

There are many more amazing elements of beauty in this basilica, such as the spiral 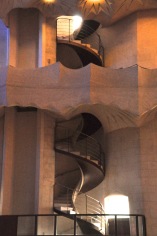 staircases in the corners. Everywhere there are arresting perspectives and visual delights, as shown below.

I hope you are as impressed by the Sagrada Família – and by Gaudí – as we are.  Gaudí’s

position in the history of architecture is that of a creative genius who, inspired by nature, developed a style of his own.  His methods continue to be considered revolutionary, a century after he devised them (!).  The Sagrada Família was and still is a constructional challenge: it is one of the largest testing grounds for construction methods in the world.  Describing Sagrada Família, art critic Rainer Zerbst said “it is probably impossible to find a church building anything like it in the entire history of art”.  Yep.

In earlier posts I hyped the heck out of this cathedral.  If you’re not blown away by the Sagrada Família and its interior, I can only attribute it to the inability of still pictures to capture it’s awesome, innovative, courageous beauty.  Perhaps it would help to look at a short video of the interior, such as the one here: https://www.youtube.com/watch?v=-17MPSCnnDU.  Still – we have to ask – is that the interior that one would wish for in a religious service?  Would you not be distracted by that interior?  Does it really promote introspection, as Gaudí wished?  We touched on the emotional relevance of religious interiors in a previous blog, when we visited Córdoba’s Mezquita with its unique juxtaposition of mosque and Roman Catholic church (Córdoba).  We think the Sagrada Família is a wondrous monument to the Christian religion, and a true milestone of human achievement with its daring vision and execution.  We’re just not sure about its ultimate role as a place of worship.

We leave Spain now, although we’ll return later for Spain’s Basque region.  Our next post will be from Amsterdam – and its great museums.