We’re off to see the stormy west coast again, but catch a sunset this time.  The NZ west coast is truly wild along its entire length; the term is “tempestuous shores”.  There are lots of signs saying to swim at only certain spots, and to be careful that waves don’t come over the boulder and wash you off.  Yeah, sure, until you stand on a boulder admiring the view and suddenly the 20th or so wave comes in and sends you scurrying for your life! 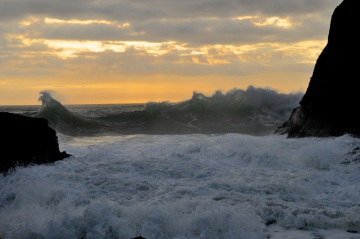 The warnings are not idle. If you look at this picture, you’ll see a wave right-center coming at you that’s just about to crest.  However, click on this image to make it bigger, and if you look to the left of that cresting wave, you’ll see a smaller one about to crest at an angle 90 degrees from the first!  The water swirls and crashes and tries to suck the sand away.  And yet the beaches often have surfers hard at work (in their wet suits), making you wish you could do that too.

I’ve booked us into a lodge almost on the beach – a 2 minute walk.  The web site looks great, and my NZ guidebook says “suite with big deck, French doors and quality furnishings and bedding.  $220/night. ” Well, the price was accurate.  The furniture is 1950’s, the kitchen pots and pans are older, the bathroom is away downstairs along with the shower that has a trickle of hot water, and there’s not much heat down there.   Message to self: stiffen upper lip.

However, the Piha beach is gorgeous, and I am going to bombard you with photos from this place.  First, a LAST look at Northland scenery.  In your mind you should join these two images to get a better feel for the view.

Now a look at where we are.  We’re at the top of a hill (visitor center; we arrived 5 minutes 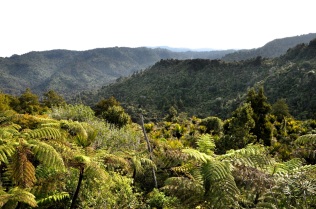 too late, but I’ve stopped and so need to take a picture).  Looking east (left picture), Auckland is in the distance (the beach we’re heading to is a popular weekend getaway).  Then turn 180 in the direction of the beach, and you see primeval forest.

I can’t help but take advantage of some tourist attractions, so here are the pictures.  Isn’t the picture on the left a pretty one?  The Maori carving on the right shows tattoos in some of the most unlikely places …. 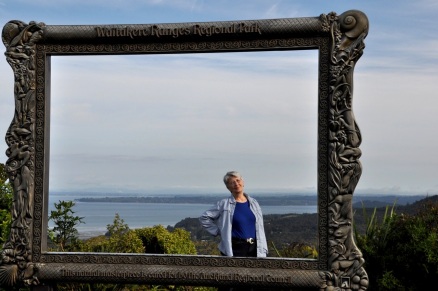 It’s pretty.  I’m showing you this beach over several days from several heights.  Although Piha is a town, there are no stores and there are no gas stations (there is one restaurant of sorts).  The road to Piha does not subsequently link with any of the other towns along the shore.  It’s there and back.  If you want to buy anything, you go back up the twisty narrow road and then quite a ways further to civilization, at least an hour away.  But who wants to go back to civilization with these views?  The beach is a black sand beach, which is kinda

cool, but I wonder about it’s allure under a hot sun.  In my experience even white sand can get pretty ouchy.  Still, it’s gorgeous.

Of course, being on the west side, there are sunsets over the ocean.  We didn’t get a great sunset, but a couple weren’t too bad.  Let me show you one of these.  You do know to click on one of the images for the show, correct?

Finally, a quick retrospective of the other (lesser) sunset, as the light fades.  Please click.

Well, it was more red than that, but I won’t complain.

in this beautiful country, and what the Kiwi seem to think they should be doing rather than “getting ahead” or “making more”.  We call them “laid back”. They seem to think enough is all they need.  We’d probably be opening up a gas station on the corner … hey, with a mini-mart, a two-fer.  Big sign.  Make a killing, no competition ….  Be open 8 – 8.  Retire at 70 and … get a place on a beach like this ….  Are we missing something here?