If you aren’t very interested in our fine-feathered dinosaurs, you might want to skip this post, which is mostly just a big dump of NZ bird pictures.

New Zealand was basically a bird sanctuary during most of its existence.  Other than a couple types of bat, it had no mammals of any kind, and therefore no predators of birds.  Birds thus evolved in strange ways, such as several flightless types like the moa, an ostrich-sized bird now extinct.  When mankind arrived, bringing big appetites as well as dogs and rats, the birds took it on the chin (I love metaphors!); particularly the flightless big birds.  Well, other birds have since arrived (including the house sparrow, darn it), but there is a huge effort here in NZ to protect the native birds from predators (which are still very limited in type: feral cats, mice, rats, stoats, wild pigs, possums, ferrets).  And except for privately owned dogs and cats, there is quite a strong eradication program for those mammals.  Dogs are popular here, but interestingly, in many places they are simply not allowed to run free.  Many parks/forests have fences and metal gates to keep dogs out.  If you take a dog into the forest, he has to be on a leash.  So I guess you’d have to say that birds still rule, here.

We took a guided tour to Tiritiri Matangi, a predator-free island.  The island had been farmed for a century before being abandoned, and was essentially devoid of trees.  In a textbook example of citizens working with the government, the island was planted with a quarter-million native trees (read – trees producing food for birds), mostly by volunteers, with explicit instructions on how to do it to get a “real” random forest.  Today it is solid forest indeed, and the songs of birds everywhere is impressive.  Below are some shots from the island.  As you can see from the first picture, we’re still close to Auckland. 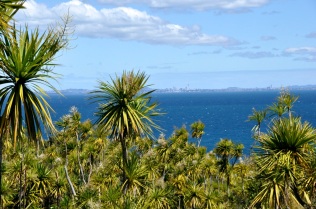 I hoped to see a Takahe, a turkey-sized flightless bird named from fossil bones and 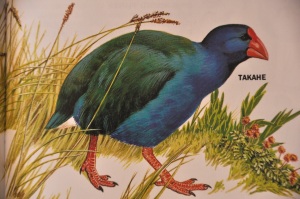 thought to be extinct until discovered in 1948.  Today there are 150 of them still living, 7 on this island.  From their pictures, they look spectacular.  And on arrival, our guide hears one calling in the forest near the wharf, unusual for them.  Whooppeee!  And there are signs around saying “Please do not feed the Takahe”, another good sign.  Unfortunately it’s a pretty large group of visitors today, the ferry being cancelled the day before due to rough seas and today a (Grayhound-sized) bus of Kiwis from Whangarei arriving in the nick of time (groan).  There are plenty of guides, and our group with guide is only about 10 people, but the groups are everywhere walking around the paths making noise.  Not such a good sign.  We do see a Kokako, a pigeon-sized bird that is rare.  Alas, no Takahe show up for us.

Below are the bird pictures from our month in NZ.  Some I have included more than once, if I thought they offered something extra.  The Tui, for instance, are pretty fantastic.  These birds are everywhere in the woods, a large and aggressive bird almost the size of a magpie.  They are quite pretty, with two white balls at their throats, a shawl-like patch of feathers on their shoulder, and black going to blue/green iridescent feathers everywhere else.  What is really cool is their call(s).  They have two voice boxes (really!), and their call is something you’ve never heard before.  It reminds me of glass breaking in the most melodic way imaginable; it’s quite beautiful.  Ginger says my descriptor is all wrong, it is instead unbird-like otherworldly beautiful (and sometimes ending with a caw-like high-frequency gate creak that breaks the spell).  OK, there you have it.  Now you know what they sound like.  They are also incredible mimics, and seem to be able to duplicate the calls of other birds well enough to confuse the guides.  Below the bird pictures.

That’s if for the birds!