We’re off to see a waterfall.  It’s a nice day, not raining for a change.  The trail, like others before, is pretty amazing.  As for instance, the overhead shot here of fern tree “umbrellas”.

I note to Ginger that it feels like we have been shanghied into a Star Trek episode and here we are, beamed down on this wild planet, and there are probably dinosaurs around the corner.  She says, no, it’s more like “Honey I Shrunk the Kids”.  Well, I don’t remember seeing that movie, but I get her point.

Below are pictures of the trail.  Not bad. 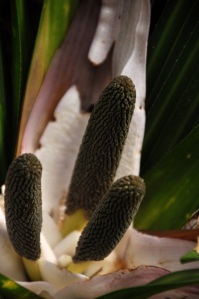 The flowers are interesting as well, such as this one.  Whooo boy, those are stamens!  Making a statement!

I’ll end with the waterfall.  Not spectacular, but definitely pretty.  Kauri were logged here years ago, there are some old pictures.  The loggers built a dam near the top of this waterfall to float the kauri trunks and then flush them down this river – over this waterfall! – to the shore.  Turns out the logs were so dinged up from the fall that they had to find another way.   Duh!