This post was written before the terrorist attack on La Rambla in August that left 13 dead and 100 wounded.  Here’s wishing those wounded a speedy recovery, and an end to the scourge of ISIS.

La Rambla (or Las Ramblas) is Barcelona’s most famous street, and its tourist mecca.  “Rambla” means “stream” in Arabic, and La Rambla was originally a drainage ditch outside the city walls.  Around the year 1400 the city walls were expanded, which then included La Rambla.  The stream was diverted to the outside, and the old course of La Rambla gradually turned into a street.  Celebrating its 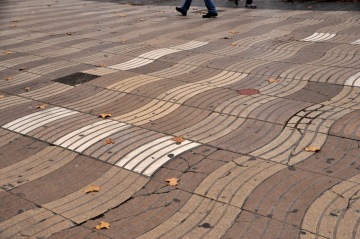 humble origins, La Rambla’s sidewalk undulates like water in a stream – cute, but not so easy to walk on!

Like the Passeig de Gracia in an earlier post (Barcelona I, the Eixample), La Rambla is a tree-lined, wide central pedestrian walkway bordered by one-way service streets.  However, whereas the Passeig is fashionable, La Rambla is instead colorful and gritty, going from the elegant main Barcelona plaza (the Placa de Catalunya that divides the old city from the newer Eixample) down to the rougher areas at the port with its history of lively nightlife, cabarets, prostitution and pickpockets.  Tourism has had its impact with a proliferation of pavement cafes, street performers and kiosks selling newspapers and souvenirs, but it remains a lively and interesting street.  So we’ll stroll down it, starting from Placa de Catalunya; we’ll also take a few diversions up short side streets.  First some looks at the walkway itself!

Looks like fun, yes?  A few steps down the Rambla we come to our first side trip, a left turn and a block into the Old City (which goes by “Bari Gothic” here in Barcelona).  I haven’t mentioned that Barcelona was founded as Barcino around 15 BC when Roman soldiers built a fort here to protect the harbor.   Where we’re standing became the forum and Barcelona’s center until Rome fell 500 years later.  It had an imposing

temple dedicated to Emperor Augustus (Temple d’August), and even in the 1100’s the area was called “the Miraculum”, suggesting it was still intact.  However, in the Middle Ages it was demolished, although parts were incorporated into new construction.  A building project in the late 1800’s uncovered four of the temple’s columns, shown below (viewed

after going down some stairs; the Roman street level was 10 feet below today’s level).

One of the major attractions of La Rambla is La Boqueria Market.  This produce market has a lot of “mosts” – the oldest, the most famous, the most central, the most crowded, the most touristy, and probably the most interesting.  We thought it was amazing.  The market has been at this general location since farmers first sold their produce to inhabitants of the walled city.  It now occupies the site of a former monastery that burned in the early 1800’s, now built as a cool glass-and-steel enclosed structure, with multiple vendors for every imaginable food type (and many you’ve never seen before).  The fish stalls look like a marine biology lab.  Some pictures of the market cornucopia are shown below.

In the late 900’s there was a small Romanesque church outside the city walls by this name; this existing church was built in the Catalan Gothic style within the walls of the Bari Gothic in the 1300’s.  The Catalan Gothic style is interestingly different from your usual Gothic cathedral.  That octagonal bell tower is impressive; it’s 150 feet tall, with 10-foot-thick walls at the base.

Half-way down, La Rambla widens into a small square; below are pictures of typical

buildings and their ornamentation.  The Chinese dragon decorates a former umbrella shop; the wall decorations are impressive!

On a side street a block away is one of the oldest hotels in Barcelona, the Hotel España, which opened in 1859 and was refurbished by Montaner in 1902.  You may remember Montaner from an earlier post (Barcelona II – Casa Lleo Morera).   The hotel has some

interesting features, like the alabaster fireplace and fancy staircases such as the one shown above, but the dining rooms are the real attractions.  The main dining room has gorgeous

tiles, mosaics, wood carvings and paintings in the Modernista style.  The interior dining room has amazing marine life (in sgraffito) swimming around the walls.   The coat hooks

are also fascinating.  The ceiling is pure Modernista.

A short distance away in the Bari Gothic is the Placa Reial (Royal Plaza), an elegant square ringed by yellow Neoclassical

buildings and numerous palm trees.  As with La Boqueria Market, big open spaces like this were once monasteries that were dissolved in the 1800’s.  Today the square is a popular meeting place in the summer, a host for many festivals and markets (like the arts and crafts market we stumbled on, shown here), and home to a large number of restaurants, taverns, bars and some of the city’s most famous nightclubs.  Getting to this square from La Rambla is via attractive passages, including the Bacardi Passatge, the first covered gallery of the city, built in 1865.

Across La Rambla and down half a block is another of Gaudí’s buildings, the Palau Güell, a mansion that Gaudí built early in his career (1886).  This palace was built not in the trendy Eixample but in an area known at the time for prostitution and brothels (it’s near the harbor – and sailors).  Although not an ideal location for the Güell family (with 7 children), Señor Güell’s father lived nearby.  Palau Güell is the first of Gaudí’s Modernista buildings, and it’s much darker and more Neo-Gothic than his later work (see earlier post, Barcelona III – Casa Batlló).  Gaudí design is always fascinating; this is his darkest work, so let’s have a look!

Shown below is the outside of the building, with its impressive parabolic-arch doorways

and elaborate wrought-iron work.  The double doorways allowed horse-drawn carriages to enter the home through one door and exit through the other.  The horses could be taken down a ramp to stables in the basement (where the servants resided), while the guests

went up several stairs to the receiving room (the antechamber) on the main floor.

The antechamber leads to “the hall of lost steps” and beyond that, the visitor’s room (where visitors waited prior to entering the Central Hall).  Starting with the visitor’s room, note the interesting marble columns that are a feature throughout this floor, and the

intricate ceiling.  The room in between, the “hall of the lost steps” (I have no idea where the name came from), has an arcade of marble columns, a gorgeous ceiling, and a fancy

entrance to the Central Hall, a room that was dedicated to entertaining and concerts.  This Central Hall is at the center of the main floor and is 50 feet high, topped by a parabolic dome that provided light via a central opening and a series of small holes; at night,

lanterns were hung outside the dome to give the appearance of a starlit sky.  Pretty fancy!  The height of the room allowed concerts to be held with the orchestra one floor above, singers a floor above that, and the organ pipes at the top (the original surround sound?).  Other rooms on this floor were for family purposes.  The “Hall of Intimates” (now empty) was used for gatherings with close friends and a place where the Güell daughters practiced 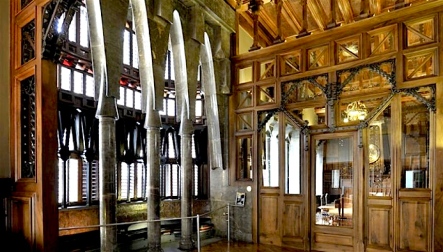 the piano and gave concerts.  Visible at the rear of the photos above is the family dining

room, with its beautiful carvings, furniture and ceiling.  The dining table and chairs are family originals.

Note Gaudí’s use of geometry in this building – for instance, the cones in the middle of the marble columns, or the parabolic dome and doors and windows and mirrors.  As you’ll see in a later post, geometry became a major factor in Gaudí’s design of his masterpiece, the Sagrada Familia.

The second floor contained the private rooms of the family – and as you might imagine,

they were nicely decorated.  You’ll meet the furniture maker Joan Busquets i Jane in a subsequent post.

Finally, a trip to the roof reveals Gaudí’s fantastical chimneys, precursers to the ones we

We are almost at the end of La Rambla!  Off to the side is the Maritime Museum, once the city’s giant medieval shipyard.  One interesting display there is a replica of the pioneering 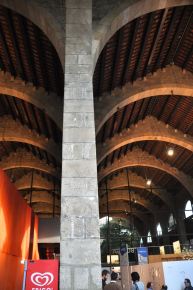 submarine Ictinao I built in 1859.  Nearby on the other side of the street is a section of the original medieval wall that encircled Barcelona in 1378.  The Portal de Santa Madrona is 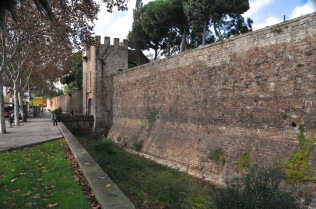 the only remaining gate of the wall.

La Rambla ends at a monument to Christopher Columbus at the waterfront.  And it’s a nice waterfront!!  Barcelona is one of Europe’s top 10 ports, with busy industrial harbors and cruise terminals, but its beach at the bottom is clean, people-friendly, and fun – and it has

great seafood restaurants, right there on the beach.  This food and the view.  Oh yeah. 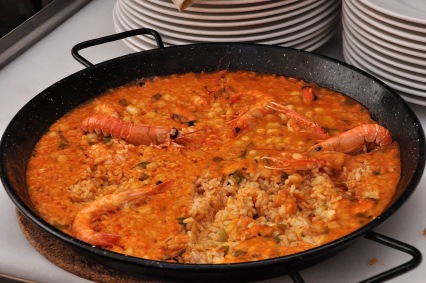 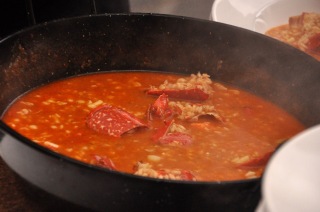 I’ll end this loooong post with the observation that not all of Barcelona architecture is Modernista – far from it!  This building, at the edge of the waterfront, is a utilities

company, Gas Natural Fenosa; and, as they say, its pretty rad!

And that gets me to exactly 100 photos; but who’s counting?

Next post: Well, we haven’t really walked the Bari Gothic yet, Barcelona’s “Old Town”, but it’s time for a change; let’s revisit Gaudí, but this time not a building.  We’ll tour his park overlooking the city, the Park Güell.