There are lots of museums in this beautiful city, and we’ve touched on a few already – the Maritime Museum (Barcelona V: La Rambla) and the Museu D’Historia de Barcelona (Barcelona VII: The Old City, called the “Barri Gòtic” or Gothic Quarter).  In this post we’ll visit the small but wonderful Museu D’Modernisme de Català, and then briefly visit Barcelona’s main art museum, Museu Nacional D’Art de Catalunya.  Somehow we still managed to miss a bunch of museums here, like the Picasso Museum, the museum (Fundació) of Joan Miro, and the Chocolate Museum (we missed a chocolate museum!!?.  Must be an excuse to come back). 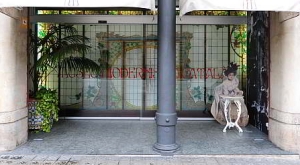 This small museum is dedicated exclusively to Catalan Art Nouveau (or Modernista) from the late 1800’s and early 1900’s.  It’s located in the Eixample neighborhood (Barcelona I, the Eixample) and is fittingly in a Modernista building, a former textile factory built in 1902.  A lot of the decorative art in this museum is simply the furniture from the trendy houses of the newly rich during this period.  Furniture, you sneer?  Oh, wait and see, you skeptic! 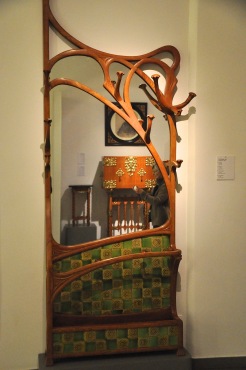 These furniture makers took art and function to a new level.  As an example, the picture on the left shows an umbrella stand (!).  It’s different, functional and beautiful.

The rich in Barcelona were very rich, and the artists were very, very good.  In addition to the Modernista style of curved lines and emphasis on Nature, much of the furniture I’ll show you employs marquetry (wood inlay).  Using up to 40 different types of wood, the furniture decoration can look like a painting; don’t be fooled, it’s inlay.  There’s a lot of gorgeous furniture here, by many artists, but I’m going to show you just pieces from the cabinetmaker Joan Busquets i Jané, who also did that umbrella stand.  There’s a lot of his work here, all of it stunning.

Below is a writing desk that Busquets made around 1896.  That base may look a bit stodgy, but that hinged desktop!  It’s amazing!  The marquetry of the lady weaving a tapestry is 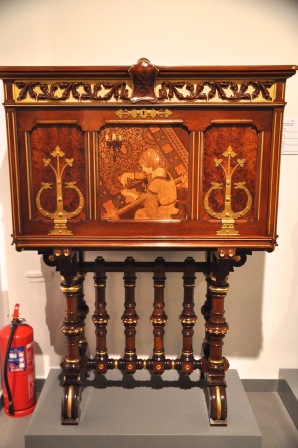 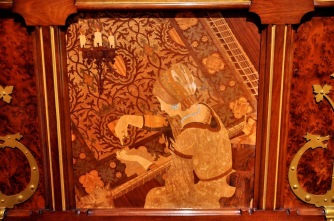 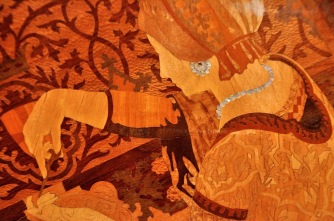 spectacular; her dress is fabulous, the entire design exquisite.

The pictures below show a 3-panel screen.  It’s really nice, but I’m showing it now because 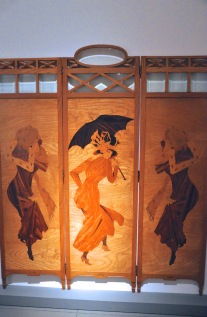 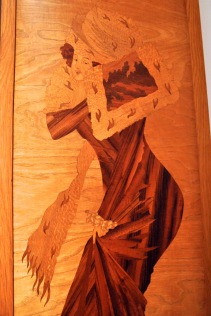 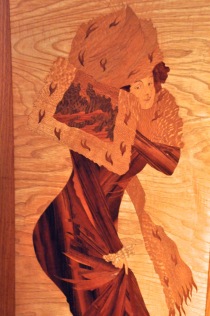 the one below, a 4-panel screen, is incredible.  Its marquetry is spectacular, but I don’t want you to think that Busquets was defined by this technique.  He was very inventive, and 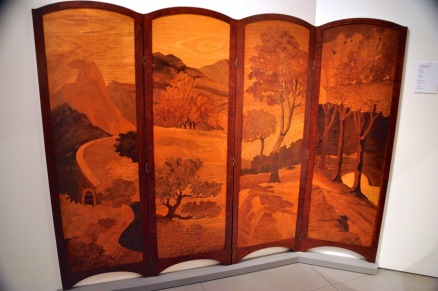 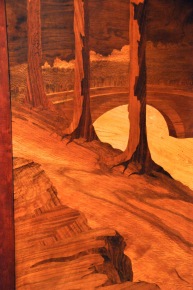 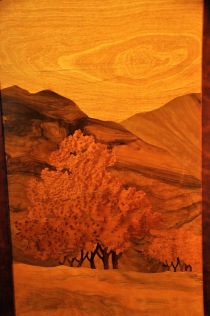 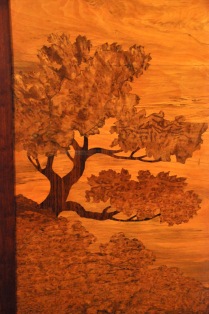 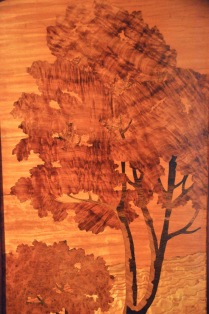 marquetry was just one of his tools.  Below is an oak piece labeled “office furniture”, with interesting carving.

The coffer-writing desk shown below is spectacular and has a lot going on (maybe too much?), but individual details are wonderful.  That last picture above of the stylized cat

I find quite interesting. Busquets experimented a lot within the world of decorative arts, and his work is considered by many as the precursor for Art Deco, the style that followed Modernism.  That cat is very much Art Deco!

I hope you’re not tired of Busquets, because there is much more!  Below are two display

cases with beautiful decorations.  I personally think the piece shown below is awkward, but I love its rose motif inlay, including what I think is a clear depiction of black spot

(a fungal disease of roses) on one of the leaves.  If true, isn’t that cute??

The item below is called “Hall furniture”. 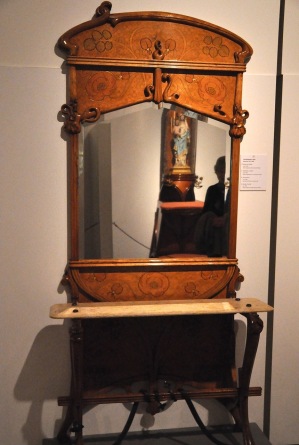 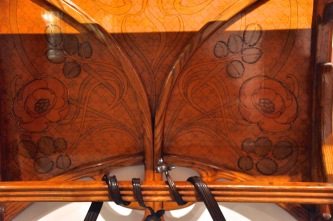 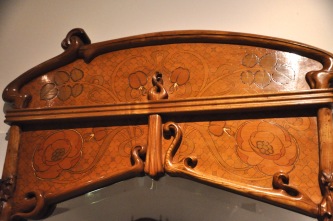 Humor me with just a few more items from Busquets, an oak dining room table, a 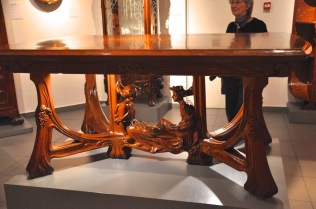 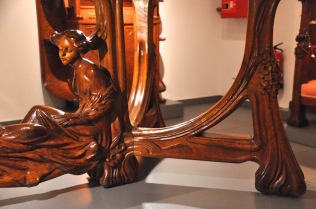 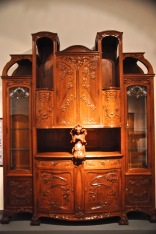 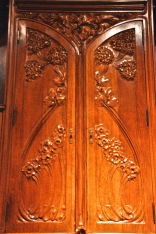 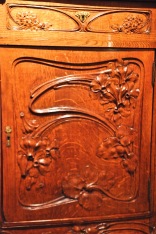 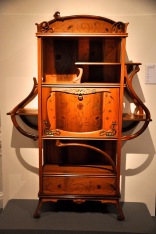 buffet, and one last display cabinet.  Of course there’s a lot more of the decorative arts from other artists in this museum!  A few are shown below.

Some of the furniture in this museum was designed by Gaudí for his famous buildings.  Gaudí designed not only the buildings but also the smallest details in the buildings, including furniture.  The picture on the left is a hat rack of oak and wrought iron from 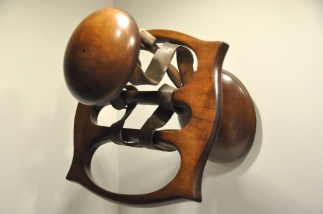 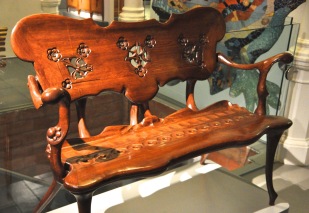 Gaudí’s Casa Calvet, the first residential building he built in L’Eixample (alas, we did not visit it – not sure you can).  On the right is a “boardroom bench” from Casa Calvet.  The chairs below are from Casa Batlló (Barcelona III: Casa Batlló), along with a photograph of

some of the original furniture in that amazing house.  Interestingly, the secretary shown below was a collaboration between Gaudí and Busquets.  It didn’t say what house the

secretary was from, but the design would have fit in nicely with Casa Batlló.

This museum also has some beautiful paintings, stained glass and sculpture.  Some of the stained glass is shown below.  The first two pictures, depicting a garden, are of a window

from Casa Trinxet, a L’Eixample Modernista building by Josep Puig i Cadafalchin (demolished in 1965 despite public outcry).  The first picture on the 2nd row is just an overview to show that these windows are not small!!  The last picture is cloisonné rather than stained glass.

The paintings aren’t bad either.  The pictures below are from the Spanish painter Gaspar Camps.  What?  You never heard of him?  We hadn’t either; he was born just a decade after 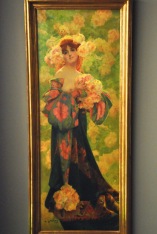 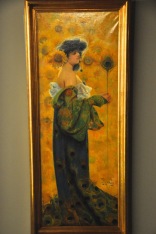 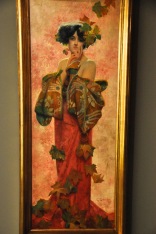 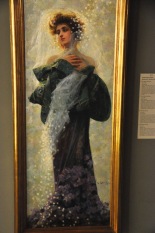 the Czech Art Nouveau painter Alphonse Mucha, whom we love (and the subject of a post once we write about our Czech visit), and Camps was clearly influenced by Mucha – to such an extent that he was called the Mucha Catalan.  If you like Mucha, you might want to check him out.

Another painter you know by now is Ramon Casas i Carbó, one of the backers of Els Quatre Gats (Barcelona VII: The Old City, called the “Barri Gòtic” or Gothic Quarter), and a big man in the intellectual and cultural scene of Barcelona at this time.  The first two pictures below are very nice charcoal/pastel drawings by Casas.  For the other two

pictures, obviously influenced by the Impressionists, I liked the water in the first and the very Toulouse-Lautrec-ish-ness of the last.

The sculpture was also impressive, as shown below.

Well!  This is developing into a long post!  I spent a lot of time showing you the small Museu D’Modernisme, so I’ll compensate by spending less time at this big one, housed in the grand Palau Nacional (built for the 1929 World 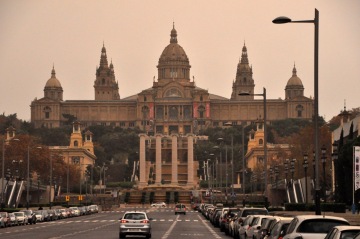 Expo).  In truth, part of the reason we spent less time here was an incident involving Barcelona’s high-crime gypsy population.  I’ll tell the story in hopes that readers who travel might be better prepared.  Walking up the subway stairs that lead to the street in front of the Palau Nacional, 3 Romanians tried to steal my camera which (I thought) was hidden in an outer compartment of my backpack.  The theft was well-planned.  With the 3 walking more-or-less abreast right behind me, the middle guy unzipped the compartment holding my camera (without me noticing).  His plan was to yank out the camera and run down the stairs toward the subway, where the passageway splits into different tunnels.  I would instantly notice the change in weight, if nothing else, turn to catch the guy, and bump into the remaining two “innocent” guys right behind me.  What saved me was Ginger lagging behind on the steps, seeing the middle guy unzipping my bag, and screaming for the police.  I whirled and grabbed the middle guy, the other two running up the steps.  I asked Ginger if this was the guy (I didn’t know exactly what was going on, and he wasn’t protesting), but suddenly he whirled out of my grasp and ran down the (marble) steps.  So I tried to tackle him on the steps, from above, but either because my backpack shifted or he turned his shoulders, I was thrown off onto said steps, dislocating my shoulder.  The (plainclothes) police were there almost instantly and caught the other two Romanians (beautiful Barcelona does have a big petty crime problem that they’re addressing).  So the camera was fine, but we spent some time in a hospital and in a courtroom dealing with this issue.  The point: I think we would not have been a target had the camera been in an interior compartment of the backpack.

Back to the museum; in addition to a lot of art, much of it Catalan, it also has magnificent views of Barcelona from its terrace, as shown below.  Often called “the Prado of

Romanesque art”, it holds Europe’s best collection of Romanesque frescoes, mostly saved from remote Catalan village churches.  There’s also a lot of painted wooden alter fronts and ornate statuary.  Alas, those topics, mostly from the 1000’s to 1400’s, are not our favorite.  To be sure, there are paintings from José de Ribera, Diego Velázquez, El Greco, Fra Angelico, Salvador Dalí, and Pablo Picaso, but we made a bee-line to see more of the Modernisme decorative arts.  Interestingly, they weren’t better than what we had seen – but, of course, they’re still beautiful.  Below are some pretty spectacular pictures of

cloisonné stained glass.  And below, more furniture (and a vase).

I’ll finish this post with some night pictures from this museum and the “Magic Fountain”.  The area in front of the Palau Nacional was the fairgrounds of the 1929 World Expo, with 3 squares on different levels, waterfalls in  the center, and the Magic Fountain in the first square (all designed by the modernisme architect Josep Puig i Cadafalch).  The Magic 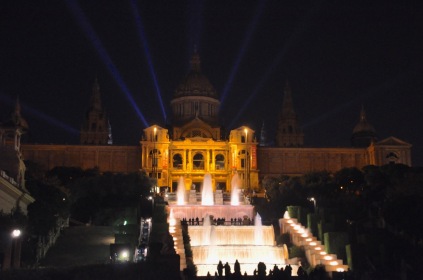 Fountain takes its name from the impression it created in ’29, and it is absolutely mesmerizing even today.  The fountain has a large number of different water jets, a huge number of different combinations, and impressive lighting options.  It’s a water ballet.   I’ll give you a taste with a whole bunch of pictures.

OK!  The next post is not to be missed.  We’ve been saving it for last.  The building of the Sagrada Familia (translation: Holy Family) Roman Catholic church was started in 1882 and taken over by Gaudí 1883.  Today this magnificent Gothic/Art Noveau/Modern incredible basilica is nearing completion (well, within a decade anyway).  Designed 130 years ago, it’s still futuristic.  As one art critic said, “It is probably impossible to find a church building anything like it in the entire history of art”.  And that’s an understatement.  It is breathtaking.  Below are some teasers, pictures from the internet.