The South Island is where NZ’s superlatives lie: it boasts the tallest mountains, largest river, deepest lakes, and wildest and most remote areas (some still unexplored, at least by modern man).  It also has regions that are the country’s driest, wettest, hottest, coldest, and windiest.  We’re going to the tall mountain region, the Aoraki/Mt. Cook National Park.  Aoraki is Maori for “cloud piercer”, and Aoraki is increasingly used instead of Mt. Cook, which is NZ’s tallest mountain at over 12,000 ft.

The drive into this central part of the South Island is definitely scenic.  The plants in the

right picture are tussock.  They’re protected, and quite beautiful, covering huge plains and growing up the sides of mountains.  There are a variety of types, including this red tussock.  Apparently they grow slowly; some plants are centuries old (!).  The plants blow in the wind like waves in the sea.  Mesmerizing.

On the way we pass Lake Tekapo, and are stunned by the amazing blue color of the lake.

It’s an other-worldly blue!  We stop to stare, and we are not alone.  People in RV’s have pulled up, taken out lawn chairs, and are just sitting and wordlessly staring.  A marvelous, incredible color; we are amazed and perplexed by how it could be.

Traveling further, we come to Lake Pukaki and the turn-off to Mt. Cook, and are blown away.  Lake Tekapo was just the warm-up!  The color of Lake Pukaki is other-worldly on steroids!  Surely it is Photoshopped!  Can’t be real!  I rub my eyes, it’s still there.

And to add to the spectacle, the mountains loom gloriously.  It’s a long lake, and the views 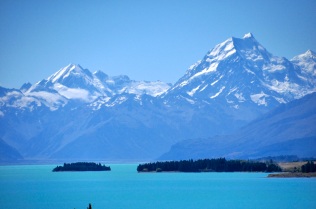 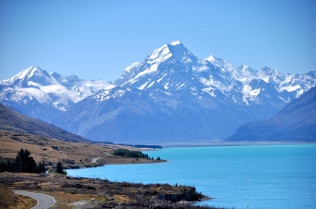 are just incredible as we travel toward Mt. Cook for nearly an hour.  For example, this picture to the left.

We’re thinking it can’t get any more spectacular, and then we go around a corner to see a craggy mountainside with a glacier glomming to it and waterfalls/rivers tumbling down.  Wow.  We begin to see why Edmund Hillary trained for Everest here.

We have splurged and are staying in the major (and historic) lodge, the Hermitage – as it turns out, a very good move.  The pictures below show the view from our bedroom balcony.  Awesome!  For perspective, there is a car on the road in the right picture.  Those rocks are big! 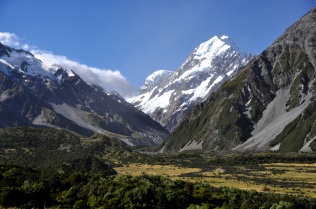 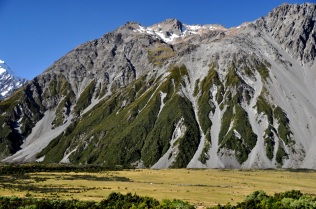 I decide to hike to an overview, Kea Point, to take pictures of Mt Cook as the sun sets.  Ginger points out that means hiking back in the dark and she won’t go, but she’s a pessimist.  The view from our room as the sun starts thinking about setting is amazing.

The hike to Kea Point is just a few miles and is uneventful.  The overview is interesting.  As you’ll see in the pictures below, Mt Cook is straight ahead, but in front is an enormous trench (and small lake) created by the retreating Mueller glacier, which is out of sight around a bend.  The wall on the other side is the “lateral moraine”, debris left by the retreating glacier.  It is an impressive wall of debris.  Mt. Sefton is to the side, and the waterfalls from the glaciers are fascinating.  It is impossible to know the scale, but the waterfalls must be hundreds of feet in height.  Finally the sun sets on Mt. Cook, and the view is nice, but not as impressive as I had hoped.  Alas, on the walk back I miss a turn and walk a couple of extra miles, costing me daylight, and I end up twisting the same stupid ankle in the dusk.  Could Ginger have been right? 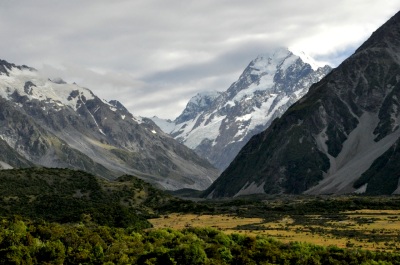 The next  morning we are greeted by Mt. Cook.  It is posing for us – Aoraki, the Cloud Splitter.  It’s magnificent.  For Maori, the mountains are sacred; I’m not far behind.  Mountains are so old, and so awesome.  In their womb they were simple sediment, compressed under enormous pressure when the world was under water.  They were born by cataclysmic forces of heat and pressure and volcanoes and tectonic plates, brutally thrust upward with unimaginable force to these incredible heights, and aged by wind and water over many millions of years so that we could one day stare at these monuments – these crystallized forces – that silently dwarf humankind’s silly bravado.  I stare at the mountain’s timeless grandeur, and I see America’s backwards politics and petty strutting and our daily big concerns for what they really are – little insignificant blips in the story of this planet.  When there’s a rock like that in front of you, you can only stand there, mouth agape, and make space in your head for something akin to religion; like the Maori.  Below are a few more pictures of this marvelous valley.

That ankle seems to serially sprain, so I decide to have it looked at in the nearby (hour away) town of Twizel – which allows me to drive along Pukaki Lake again.  The sky is different, and the lake color is different, but it is still other-wordly. 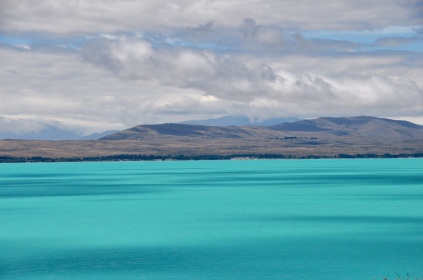 Alert!  This is Ginger now.  While husband is off seeking succor for his self-inflicted wounds , I decide to take a short hike through Governors Bush, just a 10 minute walk from the hotel.  It’s cloudy and threatening rain, but my jacket is waterproof, so I head out, expecting an easy walk around a garden-like area.  Instead I discover I’m heading rapidly uphill on some of the DOC’s infamous stairs.  Oh, well, so much for a leisurely morning mosey.  I decide to snap some pics with my iPhone, so Ron can see what he missed.

The walk up this hillside “bush” is a stark contrast to the arid plain below.  Here everything is lush and green, an abundance of ferns and mosses, lichens on rocks, and epiphytes hanging from the tall trees.  I discover later that there is, indeed, plenty of 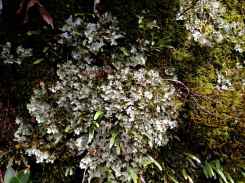 rainfall in this area, hence the lushness of Governor’s Bush.  The plain, however, is arid because it lies on a very deep, very porous moraine, and has only a shallow layer of topsoil.  Water simply pours right through, leaving desert conditions in a rainy land!

After a bit of climbing, the path begins to level out (left picture below).  It’s lovely, but dense enough that I don’t think I’ll find any mountain views.  I’m not far from wrong, although I do catch an occasional glimpse of the peaks across that arid plain, and the clouds playing Ring Around the Mountain with Mt. Aoraki. 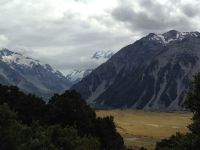 The DOC has labeled some of the plants and trees.  It’s kind of fun to be able to see their names -Turpentine Scrub, Bog Pine, Bush Snowberry – though I know I won’t remember them for long. 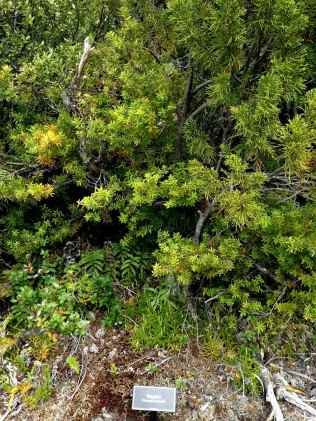 The path meanders through the upland forest for a while, but what goes up must inevitably come down; I round a bend and begin descending through the forest; 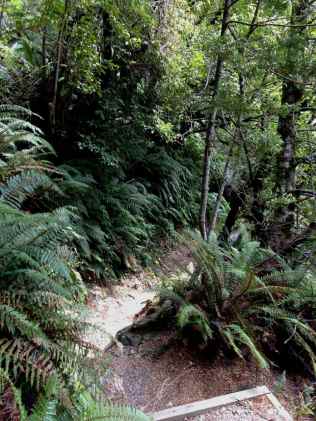 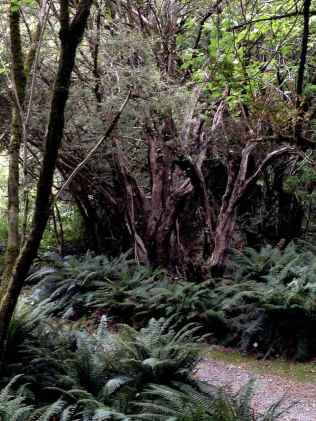 the understory becomes more & more densely crowded with ferns, many I’ve never seen before .  Unfortunately, only one kind, seen earlier on the trail, has a name tag (left picture).  Others remain unidentified. 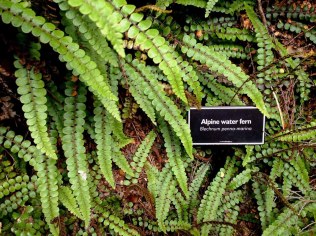 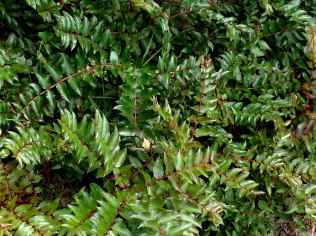 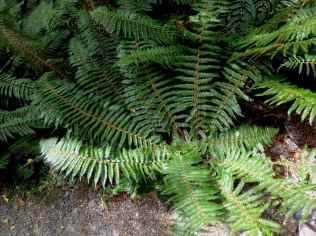 Later in our travels I see the relatively rare Prince of Wales fern, which looks a great deal like the last fern pictured.

On the way down the trail I’ve caught glimpses of a waterfall across the river; when I emerge from the woods, I decide to get a better look and bushwack up the river bank to find it.  After some rock scrambling I locate a spot with a clear shot.  The falls is relatively small, but still quite pretty.

There’s an added bonus – on my way back from the falls, I discover a picturesque stream, incredibly clear, dotted with bunches of yellow monkey flowers.

I head back up the hill to the hotel, pleasantly tired and ready to put my feet up for a bit while I await the return of my wounded warrior.

Well, the local doc thinks the ankle may have a tendon broken, but it feels pretty good moving back and forth (less so side-to-side, but it’s taped to resist that; the doc says to see an orthopod when we get to Wanaka).  She also says I’m OK to go, so I’m off on a hike.  Ginger says she has had enough for one day, so I am on my own.  I decide to do the hike to Mueller Hut – I saw the trail-head on the way to Kea Point.  The hike is listed as “challenging”; just 6 miles RT, but it’s vertical; a 3,000 ft ascent, taking 6-8 hours.  I don’t have that much time by now; it’s 2pm.  However, 1800 ft up is the Sealy Tarns, and I can do that.  That part of the trail is dubbed “stairway to heaven” and includes 2200 steps.  Oh boy.

The trail starts off pretty nicely, as shown in the picture below, top left.  The canopy of trees is mixed, and there are a number of different shrubs and plants with small white flowers.

very steep indeed, and steps are an efficient way to go up.  And up we go, oh so efficiently!  Perhaps you can see from the angle of the hill how steep the incline is!  Sometimes I can put my foot on one step and touch 6 steps up with my hand.  That’s not stairs, that’s a ladder! 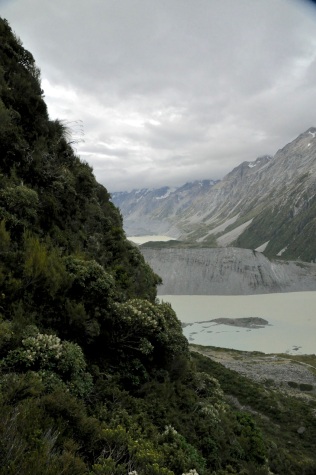 Since you can see just pieces of the view in these images, here’s a better sample.  It’s pretty up here. 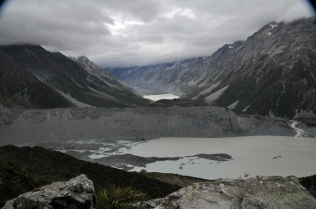 I continue to go up, and I’m approaching the cloud ceiling, and whoa!  Way up here, nose-bleed height, and the DOC has decided to pour a concrete path on the trail!  Yikes!  Who carried the bags of cement, water and wheelbarrow?  The DOC is impressive indeed – or perverse, I suppose, if you work for them.  Come to think of it, I’ve had bosses like that ….

And then suddenly I round a switchback, and I’m there.  The Sealy Tarn is disappointingly

small – a pond really – but the view around is not bad, shown below.  It’s similar to what you’ve already seen, just from a little higher up.  Can you see the blue ice in the glacier dead ahead of the Sealy Tarn, shown in the last image below?  It’s visible even in this dull overcast light. 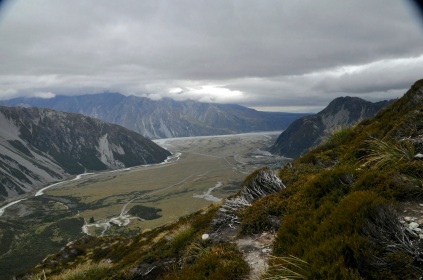 Pretty cool.  The trail continues up, a little rougher and sans steps, but this is it for me.  There are pretty flowers around, all white. 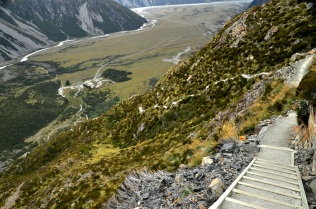 As you have seen, I am flirting with bad weather on this hike; it has been threatening rain, and on the way down the rain lets loose over the valley, left image below. 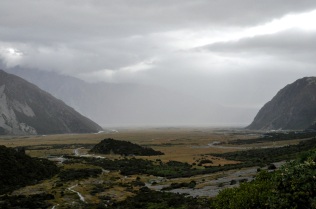 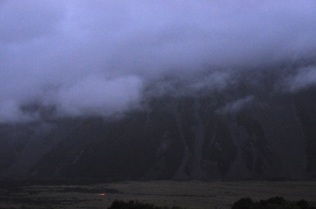 I’ve got to make it to that parking lot before it beats me there, so I hurry on.  I make it with just a few raindrops encouraging my pace.  The last image shows the clouds settling in as daylight ends.  What a fun and unique hike!  And the ankle did fine.

Leave a Reply to Ron and Ginger Warner Cancel reply