We’re off to the dramatic cliff scenery of Mizen Head, Ireland’s most southwesterly point.  We pass a restored tower house and a gorgeous beach, and then we’re at the Mizen 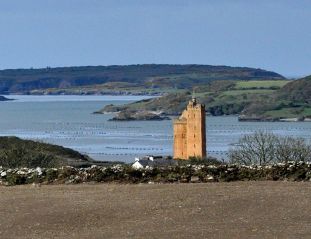 routes passed nearby and ships had to contend with treacherous offshore rocks –   “offshore rocks” may not sound very scary, but we’re talking jagged pinnacles, some jutting up 100 ft, lying 6 or more miles out and surrounded by deep water – not a friend to shipping!  The Mizen Head Signal Station, those white buildings clinging desperately to the headland crest, was once permanently manned; now it’s a museum with displays relating to the site’s strategic significance for transatlantic shipping and communications, including Marconi’s pioneering development of wireless (radio wave) communication at the turn of the century.

Visible off shore, 9 miles away, is the Fastnet Lighthouse with its own history.  The rock itself was called “The Teardrop of Ireland” because it was the last sight of the Emerald Isle for emigrants sailing to America.  The original lighthouse was built of cast-iron in the mid 1800’s, but when a similar lighthouse in the area was destroyed in a violent storm, the decision was made to replace the Fastnet with something more structurally sound.  The current lighthouse was built at the turn of the century using an ingenious design of 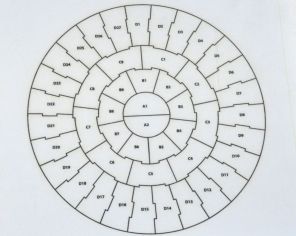 dovetailed interlocking stones to create a single monolithic structure that could withstand the wild Atlantic weather (see diagram above).  Not long after it was built, Marconi fastened aerials to it to help prove that transatlantic messaging would work.  The lighthouse is still going strong after 115 years.

Mizen Head is beautiful, a place of pounding surf and rocky cliffs diving into the sea.  Exploring here is also great exercise – the paths are either a steep up or a steep down.

There’s a cool bridge on the way to the signal station, the rock is gorgeous, and the views impressive.  Whales and dolphins are sometimes sighted here, but not today.

The cliffs in the other direction are also impressive, with the Fastnet Lighthouse visible in the far distance.  The sea has carved out rock arches from the cliffs, and one path leads

steeply down down down down down to a good view.  But the bus is about to leave!  So I have to run down, snap a couple of quick photos, and (OMG) run back up, and up, and (wheeze) up and (WHEEZE) up; you’d better enjoy those pictures!

We’re headed off for lunch at Crookhaven, a small fishing village.  We pass abandoned houses from various ages, suggesting life was not so easy here, and gorgeous beaches,

suggesting this hard life nevertheless had some pretty nice perks.  Lunch at the water’s edge is crab again (yum), and a pint of hard-earned Murphy’s; the view isn’t bad either! 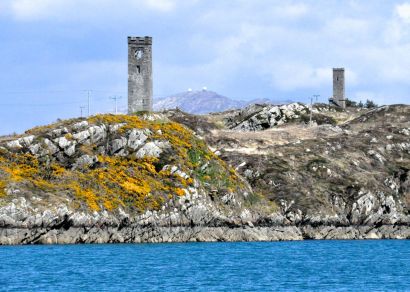 Those are signal towers in the left image above, a system of in-line-of-sight signal towers built by the English to warn if Napoleon was coming by sea (he never came).

After lunch we’re off to get our feet wet at Barley Cove Beach, and then back to Skibbereen

to experience Irish road bowling.  It is what it sounds like, and it’s a serious Irish sport that’s particularly popular in County Cork.  The sport traces its history back to the 1600’s, and it has a national championship and even a world championship.  It’s played on public streets with a heavy iron-and-steel ball not much bigger than a baseball.  With a running wind-up, the ball is launched underhand down the road and, as in golf, the ball is played

again from where it stops.  There is a predetermined course, and somewhat like golf the winner is the one who takes the fewest throws to cross the finish line.  A professional bowler showed us how it’s done – the ball went way down the road to where those “catchers” are waiting – and then a bunch of us took turns trying our hand (the catchers moved closer).  Based on our results, we need more practice before we form America’s Team.

I haven’t talked much about the music, but here are two performers.  John Spillane, there on the left, was a treat;  he’s heavily involved in bringing back the Irish language, primarily 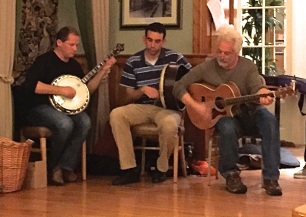 through music that he researches and resurrects.  His second Irish language album, Irish Songs We Learned at School, sold double platinum.  Micheal Murphy, there in the center of the right picture, has a beautiful voice and also did his best to teach the group an Irish line dance.  Luckily no one was seriously injured.  Thanks for the two pictures, Len!

The next day we’re off to County Kerry and the Dingle Peninsula.  First stop is Molly 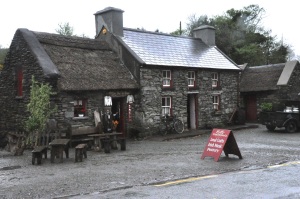 Gallivan’s cottage and farm museum that’s near the top of a mountain pass.  Molly’s Cottage is over 200 years old.  The single story thatched roof section on the left of the picture is original; the right side of the building was raised and a slate roof added in the early 1900’s.  The museum provides a good insight into the simple country life of rural Ireland in the 1800’s.  Alas, it’s raining so hard that we have to forgo the farm tour, but there is a video that’s still quite interesting.  Molly was widowed with seven

small children and had to make the farm support them.  Which she did with incredible industry!  She sold some of her farm produce on the local market, along with baked goods and hand-spun woolens.  What really helped, however, was her illicit home-brewed poitin (whiskey); it’s still being made, I might add, and is available for purchase.

I’ve been diligent in taking photos of the surrounding scenery, in spite of the rain (although it’s darn hard to keep the lens dry!).  Of course, just as we’re ready to leave the sun comes out, and of course I need to take more photos.  So here you have the pretty

scenery, before and after.

The final leg of our trip to the Dingle peninsula takes us through the edge of Killarney National Park, along a small piece of one of the major sights of Ireland, the scenic Ring of Kerry.  Alas, this tour does not take that day-long loop around the bigger, more famous, and more visited peninsula; instead, we are going a bit further north to the also-historic

Dingle Peninsula and its small-town-charming Dingle, famous for its traditional music pubs.

We actually pass through Dingle; we’ll be staying in the even smaller village of Ballyferriter.  Below is the view from our hotel window, and our private concert by some

Next post – visit to some ancient early-Christian sites, the fabulous Gallarus Oratory and Kilmakedar Church.