We’re off to explore some of the Dunvegan Peninsula, but first we’ll detour to the Fairy Glen that we’ve heard about.  As we find out, it’s not so easy to find those fairies!  We’ve driven

to a rural setting, and after traveling back and forth on a narrow winding road devoid of signs or parking lots, we decide that two cars parked at the edge of the road must mark the spot, and off we hike up some hills.  Behind us in the distance is a pretty impressive waterfall!

Scrambling up through ferns

and scrub trees, we begin to see a unique landscape of furrowed conical hills.  The glen itself is a small secluded area – fitting for small fairies, right?  It has a rocky pinnacle that will provide an overview, so up I go.  The scramble is a bit precarious, with edges on both sides, and Ginger decides to explore from below.

Well, climbing the pinnacle was fun, and the textured hills are interesting, but I don’t

see any fairies, alas.  Ginger is in the glen below, still looking for fairies while waiting for me to come down.

Based on what we saw in New Zealand, I believe the interesting texture on the hills is nothing more than years of sheep walking more or less horizontally across the hills. 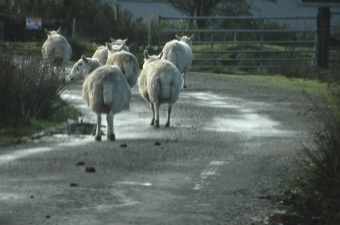 Now on to the Dunvegan Peninsula!  The roads here – like many of those on Skye – are one lane, making driving more interesting.  Usually the roads are paved, but not always.  And as shown in this image, I think “traffic jam” on this island means nose to butt sheep on the road.

The Dunvegan Peninsula doesn’t have the bigger hills, but it’s pretty enough, as shown below.  We’re off to hike to the Coral

Beaches.  That’s the name, but in reality this is just UK wistful thinking; coral isn’t quite right (have you heard of the coral reefs of Scotland?  No?  Truly, their closest thing here to a tropical fish is called a “herring”).  As you can see below, the beach is distinctively white,

and indeed attractive, but it’s actually composed of white shell and calcified seaweed.  We hike further to an overview of Lovaig Bay, but the most interesting thing is simply the abandoned wall shown below.  Whatever it contained is no longer there, but the wall itself

is beautifully constructed.  Returning home, we pass Dunvegan Castle, home of the MacLeod clan, and continuously occupied by them for 800 years.

We’ve relocated further south to be near the Cuillin Hills, shown here off in the distance.  Notice that these “hills” are on the big side.  They’re only about 3000 ft high, but they’re as craggy and jagged as any alpine range.  They dominate the skyline of most of Skye.  I’d say they’re at least mini-mountains, yes?  Can’t wait to go climb one.

We’re staying at the Sligachan Hotel, a 100-yr old hotel that is a haven for hikers.  Other than a very impressive view of some of the hills, there’s not much here – it’s pretty isolated.  Below are two views from outside the hotel – not too shabby. 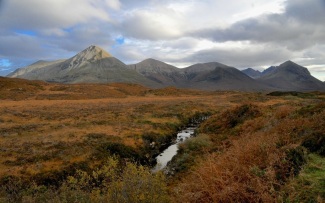 Today we’re off to climb Coire Lagan, a hike from the south side of the Cuillin Hills. 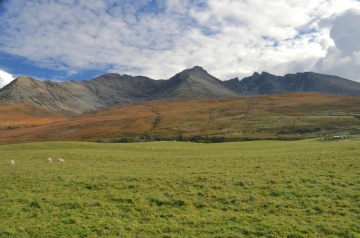 “Coire” is a Scottish (Gaelic) name for a cirque, an amphitheater-like basin gouged from a mountain by glaciers – see the first picture of the Cuillins a couple pictures above – the Sgùrr nan Gillean peak.  To get to Coire Lagan we have to circle around the Cuillins, enjoying the views of the mini-mountains such as those shown here.

Our hike starts at a pretty point on a beach, the first picture below.  Actually, we’ve already 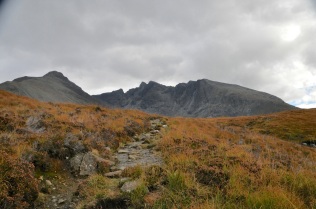 hiked up a pretty steep hill to get to this vantage point.  Where we’re going is Coire Lagan, the right picture (above); notice in that picture that the trail is tough – it’s uneven and laced with protruding rocks; you really have to watch where you put your feet.  Below are

looks back out to sea, one with Ginger chugging along.  The only sign of life, other than us, is a single sheep in this wide expanse.  The views keep getting better as the trail goes 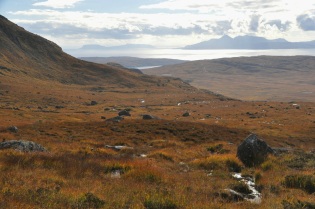 unrelentingly up.  The hike approaching Coire Lagan is shown below.  Notice how quickly the sky changes from overcast to sunny!  This is Scotland, and the weather can turn on a 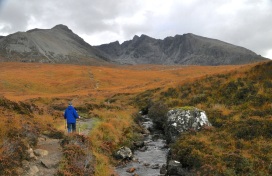 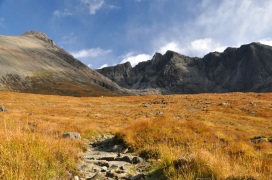 dime.  Also note there is a rock wall up ahead that’s going to have to be climbed!  The last picture above shows another sign of life, a deer.  Unlike the US, they are not prevalent here.

The trail has been a lot steeper than it looks in the images above; perhaps the first picture below gives a better perspective.  Now we have to scramble up that rock wall, and it too is

going to be a lot harder than it looks from that last picture above.  Ginger decides she will wait at the base and let me tell her about what I see (it hasn’t been an easy hike!).  I’m hoping there will be a small but beautiful lake at the cirque base, which is usually the case.  Water sluicing down says there should be.  And there is, although it’s quite small and a bit 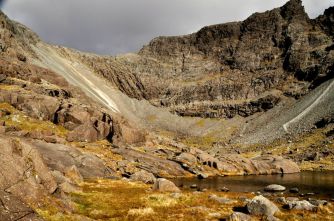 disappointing.  Still, it’s pretty enough.  The view from up here is quite a window on the world.  It feels like being half-way up to the space station, even though I know I’m just a 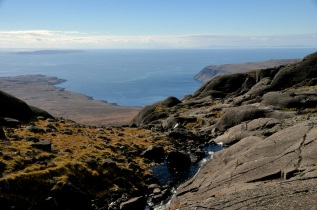 few thousand feet high.  One last look, and then back we go.  Ginger is really tired, but is

still enjoying the view back down, with a setting sun.

The Cuillin Hills, driving home, are pretty in this light, as shown below.

This last shot is of Sgùrr nan Gillean back at our Sligachan Hotel.

Our next post will feature a return visit to the beautiful Quirang.  The little piece of it that we saw in the last post was just too outrageously gorgeous not to revisit for the full loop hike.

One comment on “Isle of Skye II – Fairy Glen, Dunvegan, and the Cuillin Hills”